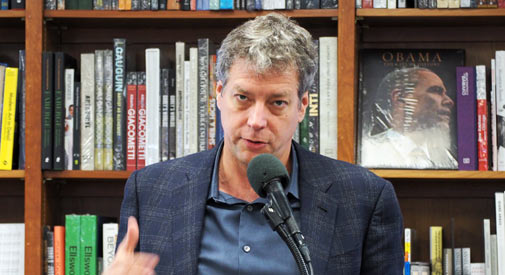 “Generation Wealth” screening and discussion with Lauren Greenfield from 7 to 10 p.m. in the Bartos Theater at the List Visual Arts Center, 20 Ames St., Kendall Square. Free. This documentary is part of a multi-platform work Greenfield has been working on since 2008 – there’s also a museum exhibition and photographic monograph, all exploring our growing obsession with wealth. Information is here.

Electric Six with Jeremy & The Harlequins at 7 p.m. at Thunder Road, 379 Somerville Ave., Union Square, Somerville. Tickets are $15 in advance or $20 on the day of this 21-plus show. Refresh your memories of the lowbrow delights of the Electric Six’s “Danger! High Voltage” from 2003 and ask yourself how can you not go see these ridiculous bastards. Information is here.

Meg Myers with Adam Jones from 7:30 p.m. to midnight at The Sinclair, 52 Church St., Harvard Square. Tickets are $20 (or $28.70 with fees) for this all-ages show. Myers’ “Desire” is past 10 million views on YouTube and “Monster” is closing in on 4.8 million – her utter fury in everything she does strikes a chord, but it doesn’t hurt that the primal screams are coming from a face and body America is prepared to love and a pop-rock tradition that makes us think it’s okay that Myers probably wants to kill us. Information is here.

Former hostage Michael Scott Moore reads from “The Desert and the Sea” from 6 to 9 p.m. at the Cambridge Main Library, 449 Broadway, Mid-Cambridge. Free. Journalist and author Moore went to Somalia in 2012 to report on the piracy epidemic and spent 977 days held captive by those pirates. In this book he covers not just what it’s like to be a hostage – from teaching his captors yoga to making a desperate escape attempt – but the economics and history of piracy; the effects of post-colonialism on Africa; and the politics of hostage negotiation and ransom. Information is here.

The Comedy Studio Presents from 6 to 8 p.m. at Remnant Brewing, 2 Bow St., Union Square, Somerville. Suggested donations are $5 (or $6.15 with fees) with 100 percent of ticket sales going to the Community Action Agency of Somerville. (The suggested donation is really suggested because these shows sell out fast.) Even though the new Comedy Studio is open for business, it’s nice to shop downstairs for a beer. Comic-in-residence Laura Severse hosts with Justin P. Drew; James Huessy; Sam Ike; Lorelai Lyons; Carrie Ross; and Corey Saunders. Information is here. Can’t make it? The comedy show 8 O’clock at 730 Vol 44: Win Lose or Draw! goes from 8 to 10 p.m. at 730 Tavern, 730 Massachusetts Ave., Central Square, with comic and artist Katie Baker kibitzing and drawing during comedians’ sets. Information is here.

Andre Dubus III reads from “Gone So Long” at 6 p.m. at The Brattle Theatre, 40 Brattle St., Harvard Square. Tickets are $6 (or $7.29 with fees) with a $5 coupon for the book, or $29.75 (or $32.23 with fees) with a copy of the book and a coupon. The author of “House of Sand and Fog” and “Townie” reads from a novel about an estranged father driven to seek out a daughter he has not seen in decades, then talks with Alexandria Marzano-Lesnevich, author of the “Fact of a Body: a Murder and a Memoir” as moderated by WBUR’s Anthony Brooks. Information is here.

Sexpardy! from 6:30 to 8:30 p.m. at Aeronaut Brewing, 14 Tyler St., near Union Square, Somerville. Free. The Fenway Institute and Good Vibrations challenges teams of up to six people age 21-plus to answer questions themed around sex – ranging from sex toys to historical sex facts as topics, with everything in between – for prizes. Information is here.

Honk! festival kickoff from 8 p.m. to midnight at Bow Market, 1 Bow Market Way, Union Square, Somerville. Free. The festival of activist street bands begins its 13th year with a song exchange – and then a concert into the night. Information is here.

Thirteenth Annual Honk! Festival of Activist Street Bands from noon to 9 p.m. from Davis Square, Somerville. Free. Twenty-eight bands from around the world (including aNova Brazil, from Boston, pictured) perform all day, outdoors, with Elm Street closed to cars from 1 to 5 p.m. for art-making that can be used to march along with the bands in Sunday’s parade. Information is here.

James Adomian at 8 p.m. at The Center for Arts at the Armory, 191 Highland Ave., Somerville. Tickets are $21. Comedian and actor James Adomian has been all over the place – from “Last Comic Standing” to “American Dad” – and was Bernie Sanders almost before Bernie Sanders was. (He’s half of the “Trump Vs. Bernie” debate act from Comedy Central and Fusion that went on international tour in 2016). Information is here.

Overnight Readathon from 8:30 p.m. Friday to 7 a.m. Saturday at Porter Square Books, 25 White St., Porter Square. Tickets are $25, with proceeds going to support The Porter Square Books Foundation and the Miranda’s Hearth arts community. Most of the night will be spent reading, but with Cafe Zing coffee, Flatbread pizza, games including Anomia, Mad Libs and Dick, raffles, art projects and finally Bagelsaurus bagels and more Zing coffee to see readers out into the new day. Information is here.

“Improvised History” from 8:30 to 9:30 p.m. at The Democracy Center, 45 Mount Auburn St., Harvard Square. Free, with donations welcome (including by cash, credit or Venmo after the show). An improvised show based on what we remember about U.S. history – in this case, from early industrial New England. Ware Street Improv opens. Information is here.

Thirteenth Annual Honk! Festival of Activist Street Bands parade and 40th annual Oktoberfest from noon to 2 p.m. from Davis Square, Somerville, to Harvard Square. Twenty-eight bands head to the 40th annual Oktoberfest, where some 200,000 revelers throng the streets of Harvard Square to shop at stalls with arts, crafts, vintage items and other gifts; eat international foods sold by dozens of vendors; be entertained by acts on six stages (including Honk! bands) and a variety of other genres lending themselves to dancing in the streets; and drinking at five beer gardens. Information and a full schedule of bands is here.

Cambridge Area Stronger Together second annual Poetry Fest from 2 to 4 p.m. on the lawn in front of the Cambridge Main Library, 449 Broadway, Mid-Cambridge, or inside in the lecture hall in case of rain. Free. Poet laureates from Cambridge, Somerville and Arlington come together as well as poet non-laureate – and everyone is invited to bring and read aloud their own poem celebrating peace, justice and community. Information is here.

Tufts Sunday Concert Series: “To Charm With Sorrow” from 3 to 6 p.m. at the Granoff Music Center at Tufts University, 20 Talbot Ave., Somerville. Free. Tufts faculty member Thomas Stumpf gives a Steinway piano recital of “To Charm with Sorrow,” a phrase Tufts composer John McDonald found in the Andrey Platonov novella “Soul” that inspired him to write four short pieces for Stumpf to perform – bookends for a program that includes two fantasies by Yehudi Wyner and the world premieres of works by Kareem Roustom and Stumpf himself. Guest artists are saxophonist Philipp Stäudlin and violist Scott Woolweaver for a program rounded out by piano music of the 19th century by Schubert, Brahms, Fanny Mendelssohn and Chopin. Information is here.

The Weirdo Show, hosted by Niki Luparelli, from 8 to 10 p.m. at The Comedy Studio, 1 Bow Market Way, Union Square, Somerville. Tickets are $10 in advance (or $11.30 with fees) or $12 the day of the show (or $13.36 with fees). This briefly delayed children’s show for adults – with wacky neighbors, edu-tainment and backstage bickering on the frontstage – finally launches at the brand-new Studio with helpers Mark Gallagher, Ethan Marsh, Jimmy Cash, Lindita Taka, Michael Atkinson, Victoria Queen, Kandi Dishe, Charlie Cockpit, Nathan Burke, Andy Ofiesh, Sarah Blodgett and comic-in-residence Liam McGurk. Information is here.