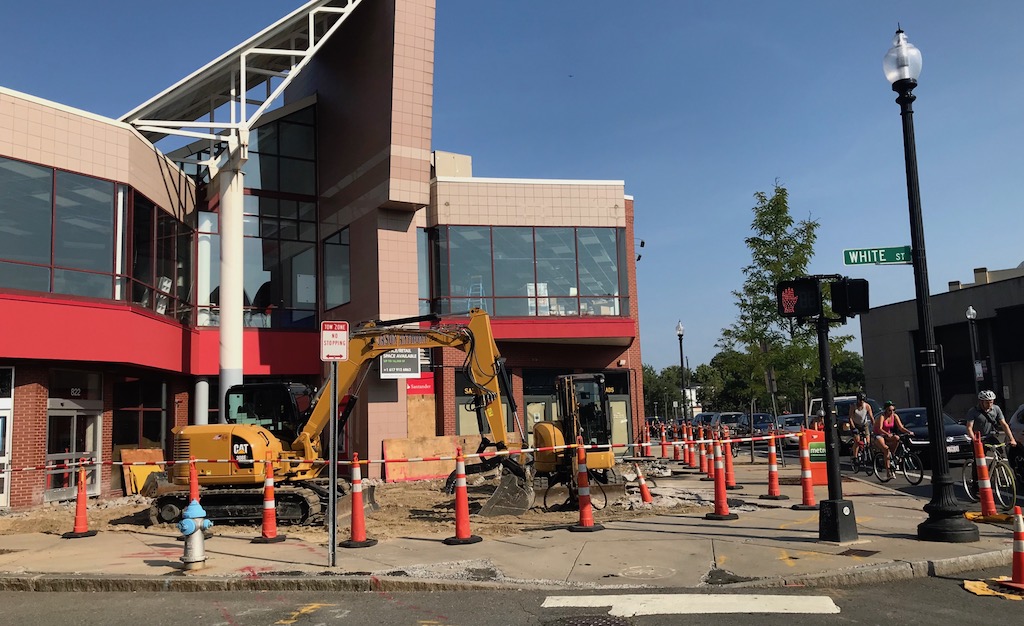 The concrete entry plaza to the Porter Square Galleria is done over in August in anticipation of a Target store opening. (Photo: Marc Levy)

Target announced plans to open its Porter Square store to the public Oct. 21, giving its first 1,000 visitors after 8 a.m. that Sunday free reusable bags and hosting family activities from 11 a.m. to 3 p.m. – but a small sign that appeared on the store later told passers-by that shopping would begin Oct. 17.

The 822 Somerville Ave. small-format store – the nationwide retailer’s sixth and seventh in the Boston area, since a Burlington location opens the same time – takes up approximately 29,000 square feet in the 54,265-square-foot Porter Square Galleria, filling the most prominent three-quarters of the building facing the red line T stop and bringing a complete redo of the mall’s central atrium and concrete entry plaza.

The store is around 7,900 square feet bigger than the two-level Target that opened in Central Square in March 2017. Two-thirds of the new space had been empty for more than two and a half years, after a Walgreens opened there in August 2013 and closed July 30, 2015 – a short run after completely refurbishing the space, including adding an escalator to merge the formerly separate spaces used by Pier 1 Imports and Blockbuster Video. The remaining part of the new Target was left empty by a shuttered restaurant. A Potbelly’s sandwich shop closed in June below it, leaving a blank space as the retailer holds its grand opening.

The store will employ around 40 people permanently, but Target execs said Tuesday that’s not enough for the expected seasonal shopping rush; the chain plans a hiring event this weekend, 10 a.m. to 6 p.m. on each day Friday to Sunday at the store and other Target stores, according to a press release, to help find 3,000 seasonal workers for all 35 Boston-area stores – part of the roughly 120,000 seasonal team members to be hired nationwide, with an additional 7,500 positions in fulfillment and distribution centers.

“All team members hired will begin at $12 an hour minimum wage, part of Target’s commitment to increasing its minimum hourly wage to $15 per hour by the end of 2020,” according to a press release. (Working hours during the holidays also brings a 10 percent employee discount and 20 percent discount on produce and some other branded “wellness” merchandise, it said.)

This story was updated Oct. 15, 2018, to reflect an earlier opening date for the Porter Square store.