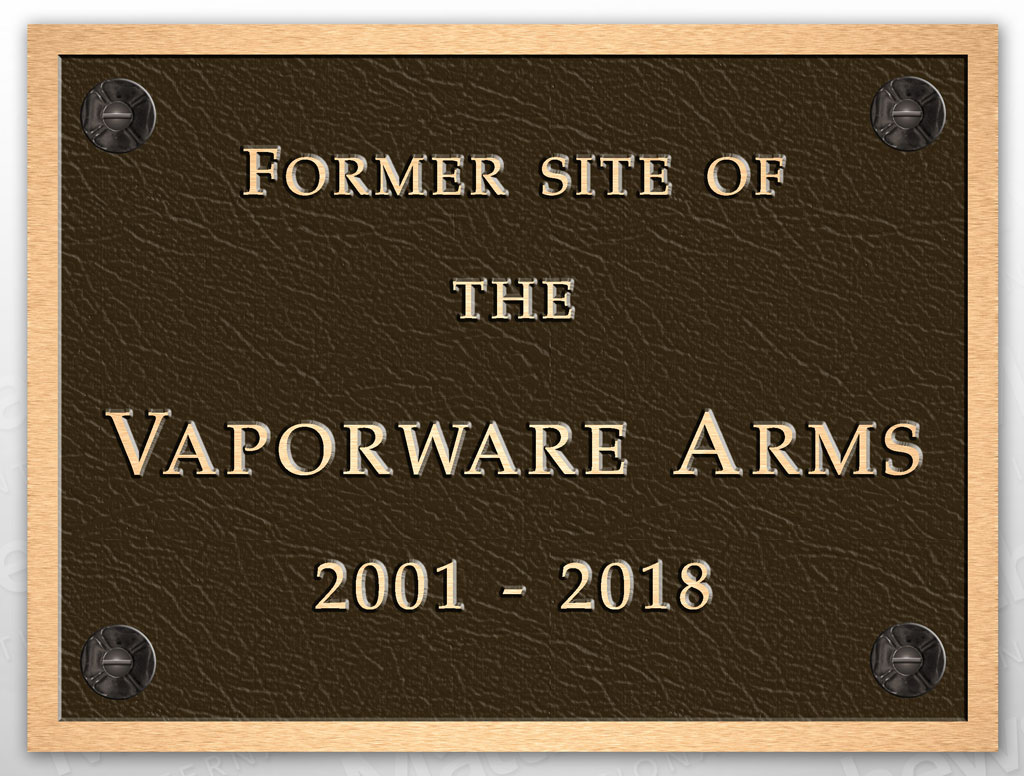 An East Cambridge resident is giving a commemorative plaque to Boston Properties for its building at 88 Ames St., Kendall Square.

Kendall Square’s uber-hip Proto apartments are getting a lobby addition that should mystify and amuse its wealthy, techy residents for years to come: A cheeky, faux-bronze plaque identifying Proto as the “former site of the Vaporware Arms.”

The plaque is a gift from outspoken East Cambridge resident Heather Hoffman to developer Boston Properties, which built the tower at 88 Ames St. after a history of frustrating starts and stops – and after subtracting 42 percent of its Kendall Square rooftop garden, conning the City Council for permission with the threat of Google leaving town and endorsement of a Cambridge Redevelopment Authority run by by a single rogue employee with no board oversight. 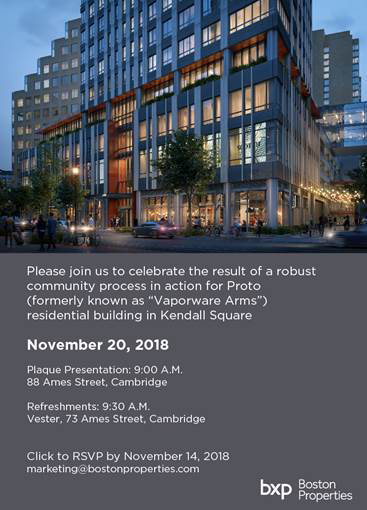 Boston Properties took the opportunity to carve off some of that garden space for a building it wanted to put up on Ames Street, with senior vice president for development Michael Cantalupa promising residents the company would more than double the amount of open space being lost in exchange.

At the time – the spring of 2012 – Hoffman was not having it. “There’s no trust here. We’ve been lied to over and over. We’ve been promised things,” she told Cantalupa. “This housing is vaporware.”

It was a warning she gave city councillors repeatedly, that Boston Properties, having backed out of construction several times since 2001, would never put up the Vaporware Arms. The council went ahead.

Fast-forward to July and the opening of the 22-story Proto, with 280 apartments ranging from $2,560 to around $5,550 monthly (with 36 designated affordable), as well as 16,000 square feet of retail. It has a 24-hour concierge service, an “in-house coffee lounge,” video games and a yoga-spin studio – and an outdoor terrace where public gardens used to be.

Also in July, Hoffman sent Boston Properties a sketch from Colonial Brass in Taunton of the faux-bronze plaque, saying it should post the plaque in the Proto lobby “as a point of pride that you came through with something the city and your neighbors really wanted.”

“I love it,” Cantalupa told Hoffman.

Boston Properties is inviting East Cambridge Planning Team members and CRA officials to a Nov. 20 plaque unveiling party, with refreshments, “to celebrate the result of a robust community process in action for Proto (formerly known as ‘Vaporware Arms’).” The company’s vice president for development, David Stewart, even offered to pick up the tab for the cost of the plaque.

“I hope that a goodly crowd can turn out on a weekday at this hour,” Hoffman said, hoping to encourage people to celebrate a victory.