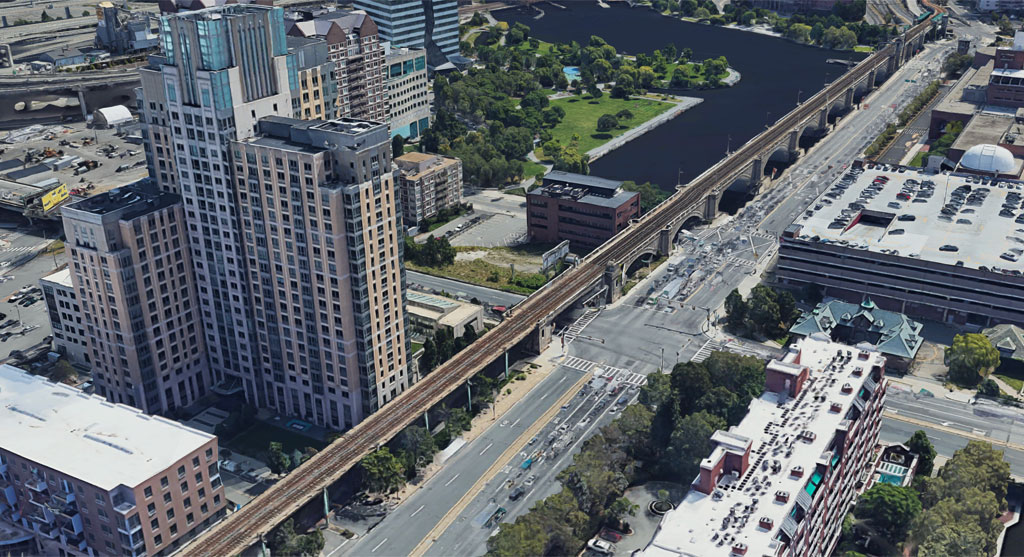 A bicyclist died Friday after being hit by a dump truck at Museum Way and Monsignor O’Brien Highway, near the Museum of Science. (Image: Google)

A ripple of rage went through the bike community Friday when it was learned a 24-year-old cyclist and Cambridge resident was struck and killed by a dump truck at Museum Way and Monsignor O’Brien Highway, near the Museum of Science.

The truck was reportedly trying to make a turn onto Museum Way shortly before 8:15 a.m., with the cyclist on the right waiting to make the same turn. “When both the truck and bicyclist began to make their right turn, the bicyclist was struck by a tire of the truck,” according to state police.

The bicyclist was taken to Massachusetts General Hospital, where he was pronounced dead from injuries from the incident, police said. The crash is under investigation and police are withholding the name of the victim until next of kin is notified. Boston University student media identified the victim as Meng Jin, of Shanghai, who expected a graduate degree in economics next year.

The name of the truck driver, a 50-year-old man from Leicester, will not be released until the investigation determines if charges will be filed.

Last month dump truck driver Daniel Desroche, 54, of Methuen, was charged with negligent operation in connection with the crash that killed Cambridge’s Jie Zhao, 27, who was walking at Magazine Street and Putnam Avenue in the Cambridgeport neighborhood.

“This has to stop,” city councillor Quinton Zondervan said. “It is inexcusable that we continue to allow these dangerous trucks to operate on our city streets without requiring them to have guardrails, sensors, automatic braking, collision avoidance, backup cameras and all other technical and other safeguards to maximally reduce the chances of them running us over.”

Heather Allen, a Cambridge mother of four children who ride, pointed to the dicey nature of the stretch of road, where cars exceed the speed limit regularly and bicyclists are intimidated from taking the full lane, despite being allowed by traffic signs. “It is unconscionable that the Charles River Dam road still lacks bicycle lanes,” Allen said.

Bike advocate Jon Ramos of Somerville and Steve Bercu of Cambridge, who serves on the board of the Boston Cyclists Union, were more critical of state Department of Transportation oversight of the roadway, where safety improvements were promised for after the Longfellow Bridge was completed in the spring. “Where are the changes?” Ramos said, “How many deaths is it going to take to fix all of your known problem roadways?” Many in the cycling community shared that upset with the agency’s delay – one using the phrase “blood on their hands.”

The agency, through its communications department, said, “We express our sincere condolences to the family of the victim and will continue to work with key stakeholders to ensure ongoing pedestrian, cyclist and vehicular safety throughout this area and around the commonwealth.”

The agency’s plan for safety improvements – still on the books – is mostly for line striping; the Cambridge Bicycle Safety Group, citing an increasing number of fatalities since 2015, prefers protected bike lanes. Ramos said the solution that would have avoided the day’s tragedy was protected intersections.