Sci-fi festival with 24-hour marathon back, with ‘Flash Gordon’ doc leading off 11 days 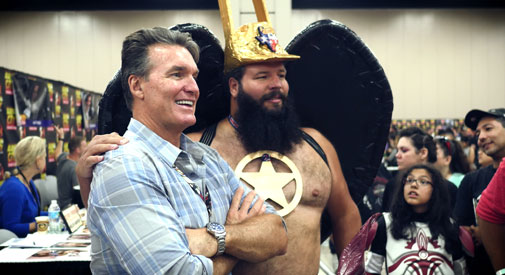 Sci-fi festival with 24-hour marathon back, with ‘Flash Gordon’ doc leading off 11 days

The 44th annual Boston Science Fiction Film Fest kicks off Friday for an 11-day run at the Somerville Theatre, concluding with the ’Thon, a 24-hour stretch of new and old classic sci-fi staples that includes “Sunshine” (2007), “Annihilation” (2018), “Escape from New York” (1981) and “Rollerball” (1975). The fest, the brainchild of Garen Daly, is proud to proclaim itself the longest-running genre fest in the United States.

The fest, presented in partnership with host Somerville Theatre and the Museum of Science, among others, boasts eight world premieres and three U.S. premieres. The opening night highlight is the appearance of Sam J. Jones, the handsome blond everyman who played the titular hunk in the cheesy early ’80s delight “Flash Gordon,” taking on Ming the Merciless to a raging Queen scored soundtrack. (In case you forgot, Jones delivered an uproarious turn playing himself in the locally shot “Ted” (2012) opposite Mark Wahlberg. ) Jones is also the subject of director Lisa Downs’ documentary, “Life After Flash,” recounting Jones’ post-“Flash” battles, including with producer Dino De Laurentiis, and Downs will be in attendance.

Jones appears a final time at the fest: “Axcellerator,” screening Saturday, was filmed in Rutland, Vermont, by director David Giancola and includes Jones among its cast.

Also on the docket is “Ikarie XB-1” a restored Czech classic from 1963 based on Stanislaw Lem’s 1955 novel “The Magellanic Cloud.” (Other film adaptations of Lem’s visions include Andrei Tarkovsky’s “Solaris” from 1971 and the 2002 remake.) “Ikarie,” screening Saturday, charts the challenges of a space crew on a mission to Alpha Centauri to seek out other forms of intelligent life. The film is rumored to have been a source of inspiration for Stanley Kubrick’s “2001: A Space Odyssey.”

On Sunday, the screening of the 1999 version of “The Mummy” starring Brendan Fraser will feature live commentary from the film’s special effects team of John Berton, Ed Kramer and Catherine “Queen of Rotting Flesh” Craig. The 1933 version of “King Kong” starring Fay Wray screens the same night. Making its East Coast premier on Feb. 16, “Encounter” follows the weird happenings in a small backwoods town after a mysterious alien object falls to earth – think somewhere between “The Hidden” (1987) and “Invasion of the Body Snatchers” (1978). The film stars Luke Hemsworth and Anna Hutchison and is directed by first-time filmmaker Paul J. Salamoff, who hails from Natick.

On the more classic side, on Feb. 13 the fest screens the 1954 Disney-produced Jules Verne classic “20,000 Leagues Under the Sea,” staring Peter Lorre, a dashing Kirk Douglas and, of course, James Mason as the enigmatic Captain Nemo.

Over the fest’s run there may be the odd Wookiee or Sith stalking Davis Square – just good old cosplay and a sign of enthusiasm for the event and its genre.