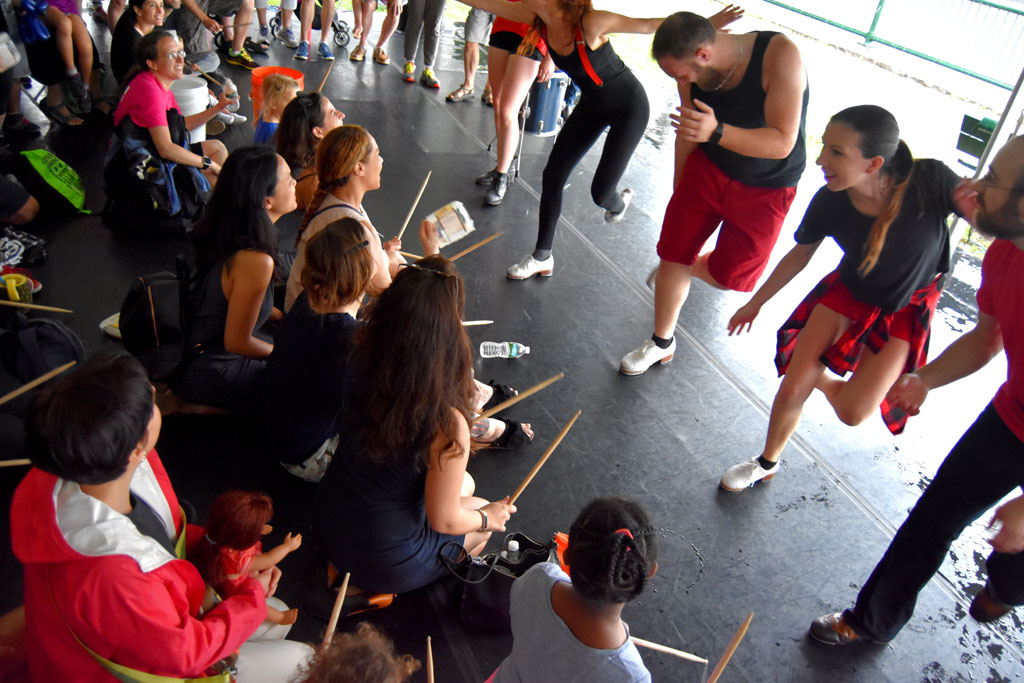 A crowd joins Drumatix under the dance stage tent for an intimate performance during a brief rain shower at the 2018 river festival. (Photo: Cambridge Arts)

After three years in East Cambridge, the summertime Cambridge Arts River Festival returns to Central Square. The 40th annual free festival will be held from 11 a.m. to 6 p.m. June 1, the Cambridge Arts organization said in a Thursday email.

The festival was last in Central Square in 2015, and its time away has been a sore spot for Mayor Marc McGovern and others who worry about a loss in culture in Central Square even as the state has renewed its five-year designation as a cultural district.

“The move from the East Cambridge waterfront into the heart of the city celebrates the state’s recent recertification of the cultural district, the work in progress for the area to be identified as a business improvement district and the seven new murals in the neighborhood thanks to the Central Square Mural Project,” said the email from Julie Barry, director of community arts for the Cambridge Arts agency.

It was good news for Michael Monestime, president of the Central Square Business Association. “We are very excited that Riverfest will be returning to the Central Square Cultural District,” he said. “Big thanks to the Cambridge Arts Council for making it possible.”

The festival offers food, crafts, multiple stages of live music, dance, poetry and theater, and art of all sorts; Boston Magazine named it the area’s best arts festival in 2017 and 2018.

New this year, according to Barry’s email, is a “Mermaid Parade” along Massachusetts Avenue that ties in with the event’s central theme: climate change. “Festival activities and performances will speak to the urgency of these global changes and the event’s connection to the Charles River,” she said, and community members are invited to join in with costumes, characters, puppets and props matching the theme.

Cambridge Arts also aims to make the River Festival a zero-waste event. Four stages will be solar-powered and offer compost bins – and the organizers will not distribute water bottles, but set up water stations instead visitors can use to fill their own reusable bottles. Vendors will use only recyclable or compostable dishes and no styrofoam, no plastic straws and no plastic bags, Barry said, and they are asked to compost all food waste and recycle used cooking oil in provided bins.

Vendors, community tables, performers, artists – including for the People’s Sculpture Racing event – and volunteers are sought to take part in the festival.