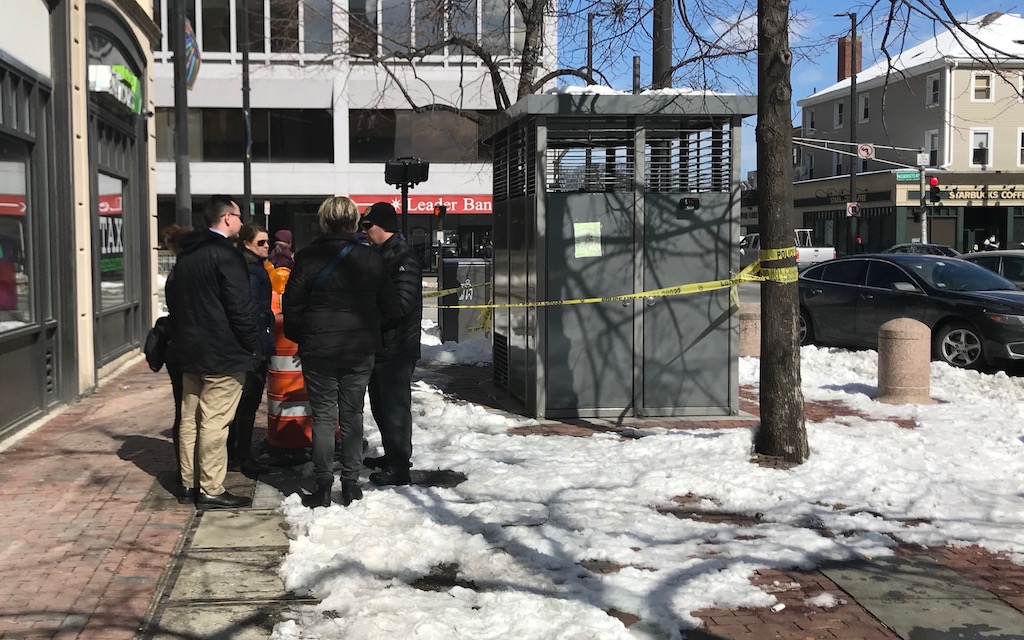 Police gather outside the Portland Loo in Central Square, where a man was removed after an apparent drug overdose. (Photo: Marc Levy)

A man was removed from the Portland Loo in Central Square on Thursday and declared dead shortly afterward, apparently from a drug overdose, police said.

Police said they received a call at about 11:22 a.m. about the body in the Loo, a free, 24-hour outdoor toilet at Massachusetts and Western avenues that opened to the public in February 2018. At an expense of around $320,000, it’s the city’s second such toilet – the first opened near Church Street in Harvard Square in February 2016.

Firefighters forced open the locked Loo door and found an “unresponsive” 55-year-old man, said Jeremy Warnick, director of communications and media relations for Cambridge police. Firefighters and ambulance staff performed CPR and took the man to a local hospital, where he was pronounced dead.

The death is believed to have occurred as a result of an overdose, Warnick said.

The man had a last known residence of East Falmouth, but was believed to be homeless. It was not known immediately how long he had been inside the Loo.

Temperatures dipped to as low as 16 degrees overnight, and there were “no signs of trauma” and nothing suspicious about the death, according to one of the law enforcement personnel gathered around the Loo, which remained taped off from public use into Thursday afternoon. It was returned to use before 2 p.m.