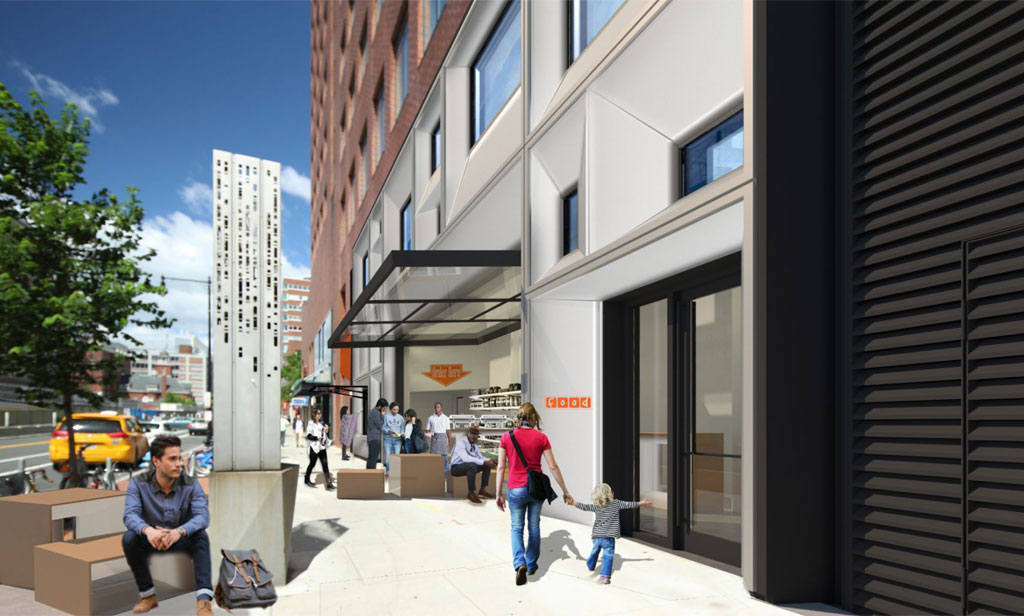 A blank wall on Main Street would be activated in a proposal to be heard Wednesday by the Redevelopment Authority. (Image: Sasaki)

City Council, 5:30 p.m. Monday. The latest proposal meant to keep lower-earning residents from being squeezed out of the city is a “diversity preservation policy,” which would give preference for new affordable units – up to 50 percent of them, anyway – to current residents of neighborhoods at high risk from gentrification. Boston has tested the idea, and councillors Dennis Carlone and Quinton Zondervan want to see how it would work in Cambridge. The city manager will report back on efforts to educate bicyclists about safety and road sharing, and councillors Zondervan and Craig Kelley and vice mayor Jan Devereux say in orders about Eco-Display trip counters (and a lack of public updates on figures from 2016 and 2018) that they want bike data to be as up to date and accurate as possible. Televised.

Concern grows over kids without immunization

School Committee, 6 p.m. Tuesday. The nationwide immunization crisis is on the minds of committee members. A motion from Patty Nolan notes that some schools in the district have fallen below the 95 percent threshold for vaccinated students that experts call necessary for collective resistance to certain diseases, asking for campus-by-campus data and wondering if it’s time for state-level changes to opt-out laws. The Graham & Parks elementary school is named as having the highest opt-out rate in the district – a tenth of students, while most schools are at 1.5 percent or lower – and Nolan, McGovern and member Manikka Bowman wonder what sets that school apart. Separately, Nolan and member Laurance Kimbrough seek an external audit of the “Level Up” English-language arts classes, which were meant to undo pernicious racial “tracking” at the high school. But academic success has been anecdotal, and the officials are concerned by survey results showing nearly one in three Cambridge Rindge and Latin School students feel teachers don’t have very high expectations of them. Televised.

Board looks at big changes at CambridgeSide mall

Planning Board, 6:30 p.m. Tuesday. A redo asked by owners of the CambridgeSide mall, struggling with retail changes like most malls in America, comes before the board. “The long-term success of CambridgeSide as a mixed-use center requires a more comprehensive redevelopment,” mall owner trustee Stephen Karp says in a request for a Planned Unit Development 8 zoning district that would mean keeping some retail while adding 600,000 square feet of mixed uses, including residential; more art, a seasonal farmers market; and a contribution to the city’s struggling efforts to keep and increase tree canopy. It would likely have dramatic effects on First Street and East Cambridge.

Preventing ID and cybercrime, or recovering from it

Public Safety Committee, 4 to 6 p.m. Wednesday. This committee run by city councillor Craig Kelley will discuss the implications of identity theft and cybercrime on residents and businesses, hear from police and talk about measures to take for protection.

Housing Committee, 5 to 7 p.m. Wednesday. This committee run by city councillors Sumbul Siddiqui and E. Denise Simmons will be dedicated to hearing public comment from the about the city’s proposed 100 percent affordable housing zoning overlay. Televised.

Cambridge Redevelopment Authority, 3:30 to 9 p.m. Wednesday. There’s plenty of design review expected for the MXD Infill Development Concept Plan, which adds 1 million square feet of commercial and residential space in various spots around Kendall Square. Afterward, board members will look also at transforming a blank wall on Main Street into storefront space; talk about the Foundry community building project, a lunchtime food truck program running this month through November and saving the “nonprofit row” building at 93-99 Bishop Allen Drive near Central Square. A Forward Fund grant pool of $300,000 is also on the agenda – now simplified and realigned to focus primarily on helping nonprofits with “much-needed financial support.”

Green Line Extension project open house, 6:30 to 8 p.m. Wednesday. The design of new stations at Lechmere, Union Square and East Somerville is on the agenda, along with a design and construction update of elements around Lechmere, upcoming bridge closings and traffic planning, as well as community path locations and connections.

The open house is held in the cafeteria of the Kennedy-Longfellow School, 158 Spring St., Wellington-Harrington.