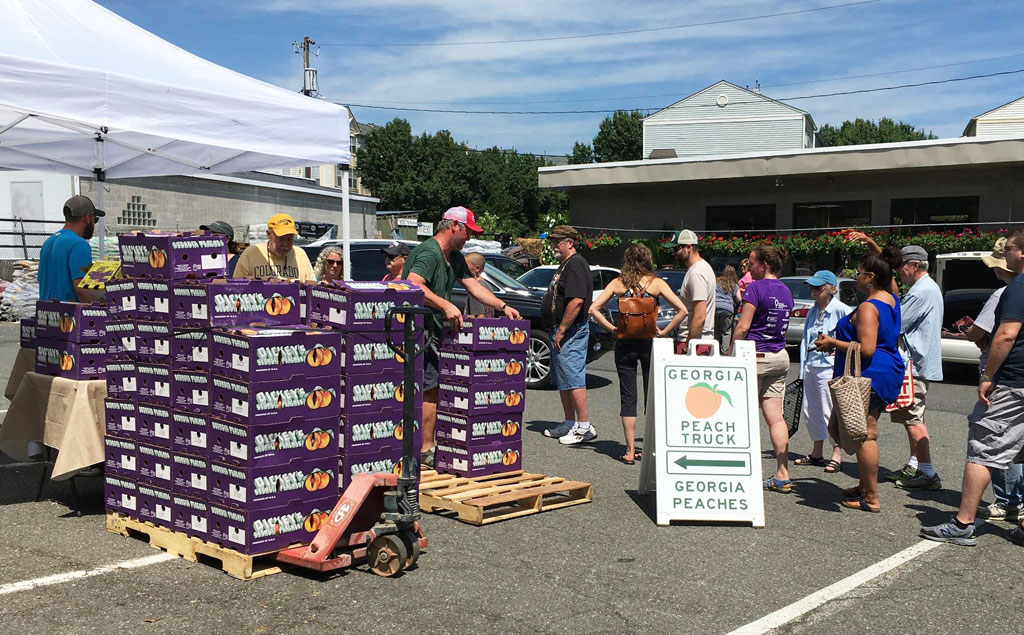 Peaches from Dickey Farms in Musella, Georgia, go on the road for parking lot sales each year. (Photo: Georgia Peach Truck via Facebook)

Don’t miss your chance to reenact a classic scene from “Seinfeld” – and, oh yes, enjoy a highly recommended summer peach. Pemberton Farms in North Cambridge is hosting the Georgia Peach Truck on Tuesday (and again Aug. 1) as it passes through town selling whole boxes of “Rolling Freestones,” pitched as a “farm-to-street” peach with flesh that separates easily from the pit for easy eating.

One box of anywhere from 50 to 70 peaches – that’s one-half bushel, or anywhere from 23 to 25 pounds – sells for $45 that “customers are welcome to divide among themselves,” according to the sellers, from Dickey Farms in Musella, Georgia.

They’re picked firm-ripe for the road trip up the coast, and take about two days to soften, when they’re good for about three days. Which is where “Seinfeld” comes in.

In the sixth season of the classic 1990s television show, in an episode called “The Doodle,” Kramer is beyond excited about the arrival of the (fictional) Mackinaw peach from Oregon, ripe only two weeks out of the year, and he’s scarfing them down fast, pausing only to urge everyone he knows to try one. Too bad he spends too long in an apartment undergoing fumigation and, in an O. Henry twist, loses his taste buds temporarily.

Kramer-esque Cantabrigians might be looking forward to a Palisades peach coming from Colorado – but that may not come this year, which makes the Rolling Freestone potentially even more of a treasure, said Greg Saidnawey, the youngest of the family that runs Pemberton Farms.

“They’re really a big deal, and probably the best peach you can get your hands on in a year,” Saidnawey said, noting that he wasn’t even sure Pemberton was benefiting financially by hosting the Dickey Farms peach seller for the first time.

“I’m just really excited. I love a good peach,” said Saidnawey, who expects to get a box of Rolling Freestones himself.