Cause of problem ‘may never be known,’ but improvements are planned
By Sue Reinert 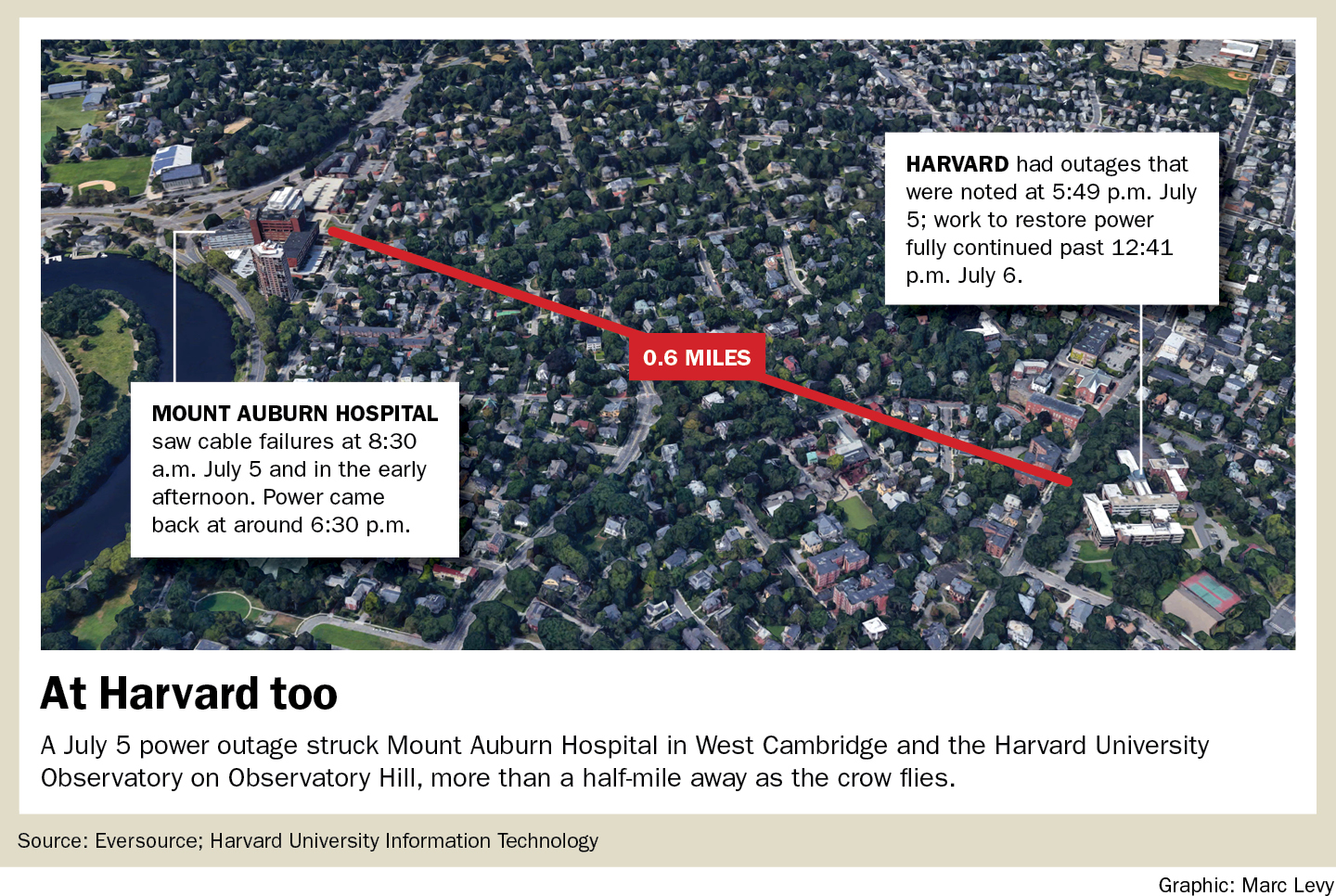 The power outage that hobbled Mount Auburn Hospital on July 5 occurred after both electrical cables serving the hospital in a redundant Eversource system failed, a fire department official said Wednesday. Assistant Chief Paul Sheehan said it was the first such double failure in his 31 years at the department, and the first hospital outage he could recall.

Several Harvard University buildings in the Radcliffe College and Garden Street area also lost power on July 5,  according to the university website, but Eversource spokesman Reid Lamberty said only the Harvard Observatory was connected to the same cables that served Mount Auburn and was affected. The hospital  and observatory blackout lasted about seven hours.

The hospital didn’t return to normal until 10 p.m., though, or 10.5 hours after Eversource power went out. Because of “the high temperature, we could not resume normal operations, as some of our diagnostic equipment needed to cool before being brought back on line,” a report from Mount Auburn to the state Department of Public Health said.

Loss of power at a hospital can be life-threatening to patients as well as hurt vital equipment. Sheehan said Eversource has two cables serving Mount Auburn Hospital, each one capable of meeting the hospital’s demand for electricity by itself. The beefed-up system was designed “to serve customers with heavy demand,”  Eversource spokesman Lamberty said.

One cable failed around 8:30 a.m. The other went out three hours later, killing power, Lamberty said. The hospital’s emergency backup generator system kicked in after that, but it didn’t have the capacity to maintain cooling equipment in every area.

Police, fire, ambulance and hospital workers didn’t have to evacuate patients from the hospital, but they did move about 15 patients from higher floors of the 213-bed hospital to lower floors because of rising temperatures, Sheehan said. “We moved patients down after firefighters went to the upper floors and told me it was uncomfortably warm,” he said.  The hospital had 175 patients occupying beds when the outage began and was in the process of discharging 20 patients, spokeswoman Kelly Hill said.

Mount Auburn closed its emergency room to ambulances, asking authorities to divert them to other facilities. Patients who walked in were treated throughout the outage, but no new patients were admitted to a bed. Mount Auburn spokeswoman Hill said some surgeries and other procedures were going on when the power failed and were completed. “The operating rooms remained fully functional” because the emergency power system could cool “essential areas” such as operating rooms and provide them light and power, Hill said. “Standard procedure is to complete any surgeries underway and to hold any new surgeries until power is restored.”

Meanwhile, Eversource sent another generator  to power the cooling system “but it would have taken quite a while to set up,” Sheehan said. Power was restored around 6:30 p.m.

Because electricity is vital to patient safety, hospitals must have emergency backup power systems that take over quickly when an outage occurs. The systems must meet requirements of the National Fire Protection Association’s Life Safety Code, said state Department of Public Health spokeswoman Marybeth McCabe.

McCabe said Mount Auburn notified the state agency of the outage and worked with the duty officer of the health department’s preparedness and emergency management office “throughout the day.”

The code, developed by private industry, does not appear to require that emergency systems be able to maintain cooling systems everywhere in a hospital. Instead, it focuses on lighting, elevators and other equipment that enable hospital employees to evacuate patients if necessary. Kelly said the Mount Auburn emergency power system “complies with all health care design standards providing power and lighting to all essential equipment, as well as cooling in essential areas such as operating rooms.”

Still, in a time of climate change, some hospitals are developing onsite non-emergency power systems that can provide cooling, freeing them from potential problems with the electric utility, industry experts say. Some recommend that hospitals write emergency plans to triage cooling systems, deciding which ones to turn on first if the hospital has to run on emergency generator power.

Kelly said Mount Auburn is “in the process of a thorough review of the incident in collaboration with Cambridge fire and police to assess any areas for improvement. We will also engage Eversource in this process.”

Lack of air conditioning in health care facilities became a national issue when 12 nursing home patients died in Florida after power failed during Hurricane Irma in 2018 and was not restored for days. Many Florida facilities had emergency generators but they didn’t have the power to run cooling systems. The state imposed new rules requiring facilities to meet temperature requirements in an outage.

Report required, but not details

The Harvard University press office did not reply to questions when contacted Wednesday. Harvard provides its own power to much of its Cambridge campus.

The state agency that regulates Eversource, the Department of Public Utilities, has been in touch with Eversource to discuss the outage, spokeswoman Katie Gronendyke said. The utility must file a report of the power failure in its next quarterly report, she said.

She did not know whether the report, which is public, must include information about the cause of the outage and actions to prevent a recurrence. A summary of all outage reports that is published on the DPU website does not have such information, The discussions going on now are “informal,” Gronendyke said.