‘The Lion King’: Circle of life brings us around with an amazing look but diminishing returns 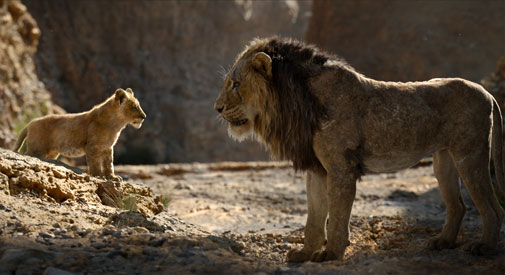 ‘The Lion King’: Circle of life brings us around with an amazing look but diminishing returns

In “The Lion King” we learn about “the circle of life,” which amounts to continuing what came before with new blood. With this new, impressive-to-behold digitally animated version by Jon Favreau (“Iron Man” and “The Jungle Book”) Disney rounds the oval itself, if just barely – the 1994 hand-drawn original with music and songs by Elton John and Tim Rice remains better; this “King” is a serviceable curio along the lines of John Cameron’s “Avatar” that will draw ire and admiration simply because of its bleeding edge technology.

And yes, the visuals are unnervingly real. The opening meander of the plains and water holes of the Serengeti feel like you’re watching an episode on Nat Geo Wild, until the animals speak.

You have to keep in mind that the original was itself based on “Hamlet.” Given the film’s success and the subsequent Broadway adaptation, it’s hard to imagine anyone coming to the film without reasonable knowledge of the plot, but there’s some pretty dark stuff here – especially for kids. The lions of Pride Rock eat some of their subjects (it’s not murder unless you kill one of your own) and main characters die in ways less discreetly offscreen than the death of Bambi’s mother. The good – nay, great – news is that in this rounding of the circle of animated-film life the venerable James Earl Jones is back to voice regal lion king Mufasa. But when the character checks out, the film kind of does too, despite the plight of Mufasa’s son Simba (Donald Glover) to reclaim the throne from Mufasa’s jealous, twisted brother, Scar (Chiwetel Ejiofor, impressive, but no Jeremy Irons). Even Seth Rogen as a gonzo warthog and Beyoncé as Simba’s childhood friend and love interest Nala feel like they need more bite.

It could be interesting how the Academy of Arts and Sciences chooses to recognize the film, should they care to. It doesn’t feel quite right to line it up to against what’s become traditional animated fare, be it the mostly handcrafted “Mirai” that competed this year the or computer-baked fare such as “The Incredibles 2” that it competed against. (One sure thing: If it does find itself nominated, it’ll get mauled by “Toy Story 4.”) The bigger question looming is whether we’re at the point where computer-generated characters are real enough to make live action passé. Probably not, but Ari Folman’s dystopian depiction of the future, “The Congress” (2013), in which an actress (Robin Wright) is distilled digitally and made into a product, certainly pushed that reality frightfully close.