‘Toy Story 4’: These may well be the end tines for Pixar series, but Forky just adds to the fun 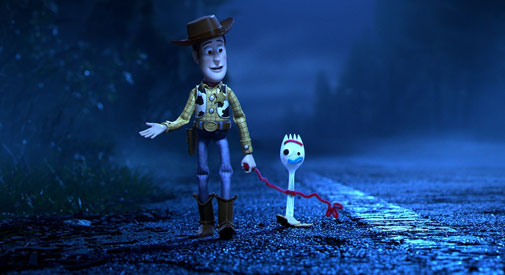 ‘Toy Story 4’: These may well be the end tines for Pixar series, but Forky just adds to the fun

The odd ones are the exceptional ones. I’m not taking about the quirky potpourri of personality in Andy’s toy chest (because they are all pretty odd and exceptional), I’m talking about the prime-numbered chapters in the long-running Pixar franchise. As is, it’s hard to believe it was nearly a quarter-century ago that “Toy Story” (1995) hit screens and defined a new generation of animation – pretty much becoming the impetus for the Best Animated Feature award initiated by the Oscars in 2001. The smart, simple tale of a cowboy doll jealous of a spaceman figurine new to a young boy’s toy collection, and its moral of friendship and support, hit with all ages. The olio of characters was as bright and infectious as their wondrous 3D rendering. Woody and Buzz were an instant thing. Of course, having a talented voice pool led by Tom Hanks, Tim Allen and Don Rickles didn’t hurt. “Toy Story 2” (1999), in which the crew had to band together to rescue Woody (Hanks) from a toy collection was a fair, pat followup; “Toy Story 3” (2010), which rightly notched that animation Academy Award, went to some dark places as Andy headed off to college, dealing with mature themes of separation and the despair of realizing you’re not needed anymore. 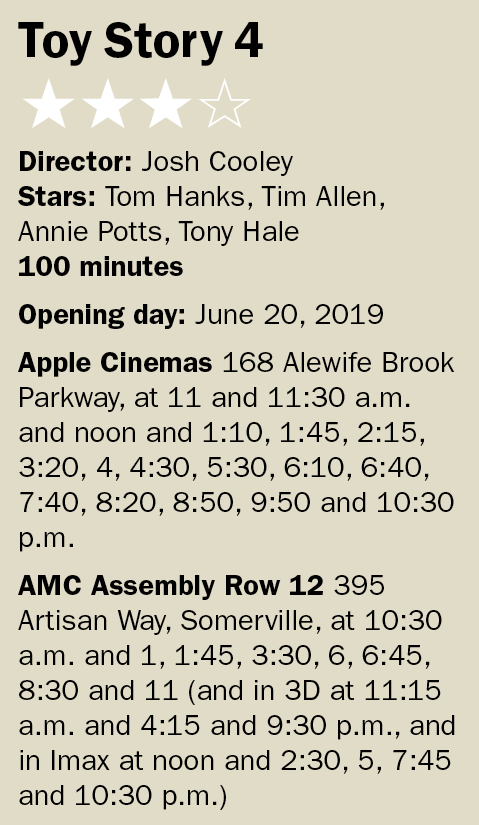 Toys, we learn in “Toy Story 4,” have a job that is pretty much what you’d expect: making your kid feel happy and secure. We catch up with Woody and Buzz Lightyear (Allen) now in the service of Bonnie, the girl who was gifted Andy’s lot at the end of “3.” Shy and demurring, Bonnie’s about to enter kindergarten and is somewhat terrified at the prospect, but before school starts her family heads out on a cross-country RV trip with much of the toy chest bunch in tow. New to the crew is Forky (Tony Hale), a kindergarten orientation creation – a spork with glued-on facial features, popsicle stick feet and a pipe cleaner twisted around the midsection for arms. Because of where he comes from, the plastic friend made of disparate materials is imbued with an innate affinity for trash (the “trash” mantra is up there with “claw” or “Groot”) and spends much of the film dumpster-diving or flying out the window of the RV. Mission one for Woody & Co., adhering to their job description, is to keep Bonnie’s new favorite in her stead even if Woody has to stay up all night tossing the Frankensteinian craft creation back into bed next to its creator after back-flipping into the nearby waste bucket.

Other smartly woven subplots have Woody separated from Bo Peep (Annie Potts) – I forgot that she was porcelain – and a segue to a thrift store where a life-sized doll named Gabby Gabby (Christina Hendricks) and her phalanx of Jerry Mahoney-styled goons hold nefarious plans for Woody. Then there’s new adds Duke Caboom (Keanu Reeves), a Canadian Evel Knievel-like action figure, and two bickering fluff toys (voiced by Jordan Peele and Keegan-Michael Key) who deliver as a goofy Greek chorus, a role Rickles used to provide as Mr. Potato Head (the comedian passed in 2017, and is used in small, archived metes here).

Allegedly “4” is the last chapter in the “Toy Story” canon. The third film seemed like the perfect concluding point, but “4,” directed by Josh Cooley, goes in a slightly new direction while hitting all the right notes. With Bonnie and a new set of friends, the series seems ripe for a spinoff. No matter – young kids going to this without seeing the previous films will likely be hooked, and want to see the full set after. To any parent rolling your eyes: Just go with it. There’s plenty of mature witticisms, and the subtle life lessons are a win for all.