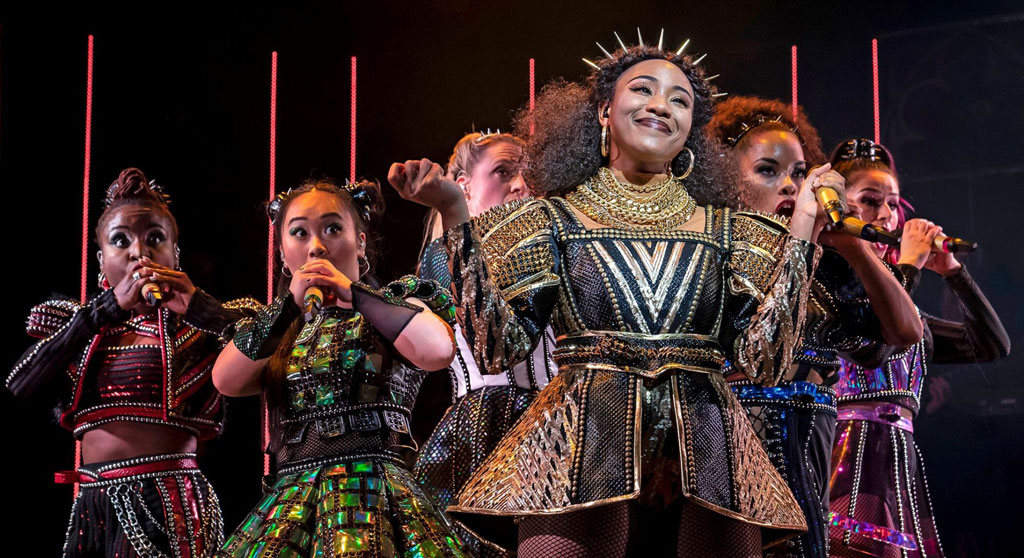 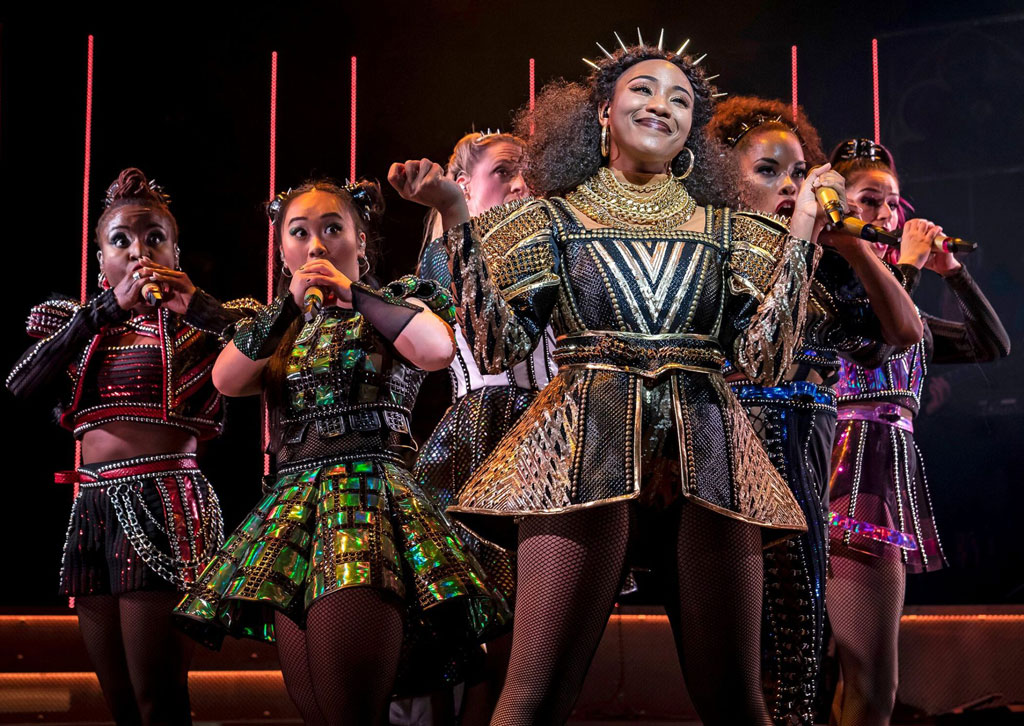 The A.R.T. is getting a jump on the 2019-20 season with Broadway-bound British import “Six,” and like last year’s brilliant new work and season opener, “The Black Clown,” it’s got an appeal that extends far beyond the typical theater base (read white and older – two constituencies of which I am a member). But that’s where the similarities between the pieces end. While “Black Clown” was an often heart-wrenching artistic masterpiece chronicling the American black experience from slavery through the 1930s, “Six” is an unadulterated blast of fun, despite the extreme misogynistic abuse suffered by our protagonists at the hands of husband Henry the VIII. “Six” refers to the number of “Ex-Wives” (the title of the opening number) who were “divorced, beheaded, died; divorced, beheaded, survived” at the hands of Henry, as the children’s rhyme from the UK television and book series “Horrible Histories” so succinctly summed up.

Like Hamilton, “Six” turns history on its head (“History’s about to get overthrown,” sing the ex-wives in the opener) with a blend of hip-hop, R&B and pop numbers with the explosive energy of a six-pack of Red Bull laced with Adderall. The musical begins, oddly enough, with the opening strains of a harpsichord version of the ’60s pop hit “Love is Blue” before kicking into the rockin’ “Ex-Wives” to set the comically irreverent tone for the evening. From there, the women launch into a part “American Idol”-style concert/part game show concept that allows each of the wives to convey their stories (in song) of how their marriages to Henry ended (including two beheadings) to compete for some unnamed prize.

For what is essentially a feminist work, it’s a bit ironic that “Six” – intentionally or otherwise – owes it premise to a horrid 1950s-60s television show, “Queen for a Day,” which is remembered primarily for its appallingly demeaning treatment of economically disadvantaged women. (There was a similarly themed 2012 Broadway show of the same name). On the show, the women competed for household appliances and other prizes by telling their tales of woe (poverty, a child’s illness) to a studio audience, with the “winners” determined by the famous Applause Meter based on how torturously sad their stories were.

But there is no real sadness in this show, as even the beheadings serve as fodder for comedy. When Jane Seymour (Abby Mueller) asks the audience, “What hurts more than a broken heart?” Anne Boleyn (Andrea Macasaet), snaps back, “A severed head!” But the plot of “Six” takes a decided back seat to the terrific pop score and its insanely clever lyrics, and the extraordinary cast of women deliver the goods with powerhouse vocals and some brilliantly choreographed and executed dance routines.

This is as much a pop concert as a musical, with the cast literally asking upfront, “How are you doing tonight, Cambridge?” and “You came here tonight to party with us old school!” following the opening number. Each woman gets her turn to shine, and no one disappoints. Adriana Hicks, who won an Elliot Norton Award for her portrayal of Celie in “The Color Purple” in 2017, kicks things off with the energetic “No Way” as Catherine of Aragon, who was divorced because she failed to produce a male heir for Henry; Macasaet is wonderfully bratty throughout the production as the beheaded Boleyn and in her number, “Don’t Lose Ur Head”; and Mueller as Jane Seymour (who died shortly after giving Henry his only male heir) provides the emotional ballast for the production with a spectacular rendition of the power ballad, “Heart of Stone,” which seems destined for heavy radio play once the show hits Broadway.

Brittney Mack as Anna of Cleves and the rest of the cast give an electrifying performance in the evening’s most intricately choreographed number, “Haus of Holbein.” Cleves was the German beauty who didn’t quite measure up to Henry’s expectations, as we learn from the line, “You said I tricked ya, because I didn’t look like my profile pic-cha!” during Cleve’s turn in “Get Down”; Courtney Mack’s Katherine Howard (who was also beheaded, for adultery) illustrates the consequences that arise from injecting a heavy dose of sexual innuendo repeatedly into her working relationships with male “friends” in “All You Wanna Do,” punctuated by the line “I’m sure this time is different”; and Anna Uzele as Catherine Parr (the one who outlived Henry) is alternately vulnerable and defiant in her marvelous treatment of “I Don’t Need Your Love.”

The choreography by Carrie-Anne Ingrouille for this production is nothing short of stunning, and received as many howls of delight and spontaneous applause as any of the musical numbers. The production was backed by a killer all-female onstage band of “Ladies in Waiting” that rocked the house, and the Victorian-era meets Judy Jetson costuming by Gabriella Slade is truly imaginative.

“Six” closes out with an empowering message of female unity, with the number “Six,” and the 75-minute show definitely leaves the audience wanting more. With this production, last spring’s “We Live in Cairo” and “Jagged Little Pill,” the A.R.T. is paving the way forward for younger, more diverse audiences to come to the theater, and “Six” proves that great theater can be loads of fun while achieving that goal.