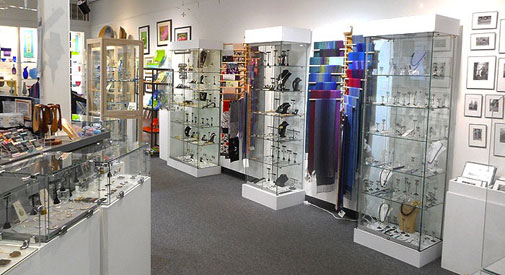 The Cambridge Artists Cooperative gets to stay in Harvard Square at its current location for at least another two years, it was announced Wednesday, though a deal looked locked in as long ago as mid-July.

“Our current landlord has made it possible for us to remain in place at 59a Church St.,” said the organization’s Ann Szerlip. “Cambridge Artists Cooperative is elated.”

News came in April that after more than three decades, the cooperative could no longer afford to stay in Harvard Square; it launched a crowdfunding campaign seeking $30,000 to relocate nearby that even with 113 donors in four months raised only $5,752.

But The Bulfinch Cos., owner of the 10,822 square-foot, three-story office, residential and retail building where the cooperative has been located, decided to work with the organization on a way it could stay – now consolidated to one floor of 1,300 square feet, with artists’ work redisplayed to accommodate the change. Szerlip called it “a fresh look.”

The Church Street gallery, through which the organization sells the works of more than 200 artists from across the country, is still larger than the roughly 1,000 square feet expected in the relocation. But it sure retains the “good foot traffic and access to public transportation” leaders hope to find.

“We are extremely pleased to continue our long-term relationship with CAC and that they have chosen to remain at 59 Church St., continuing to enhance the Harvard Square community with art, craft and culture,” said Mike Wilcox, a senior vice president and the director of leasing at Bulfinch.

The announcement was well received by the community,  The Bulfinch Cos. said in a press release. “I’m so glad that CAC will be able to remain in its longtime space on Church Street,” said vice mayor Jan Devereux in the release. “Over its 30-plus years the CAC has attracted so many loyal customers who were worried the artists might be displaced. The gallery offers unique artist-made items that people can’t find in other places or online. Harvard Square needs more stores like the CAC to set it apart from other retail districts.”