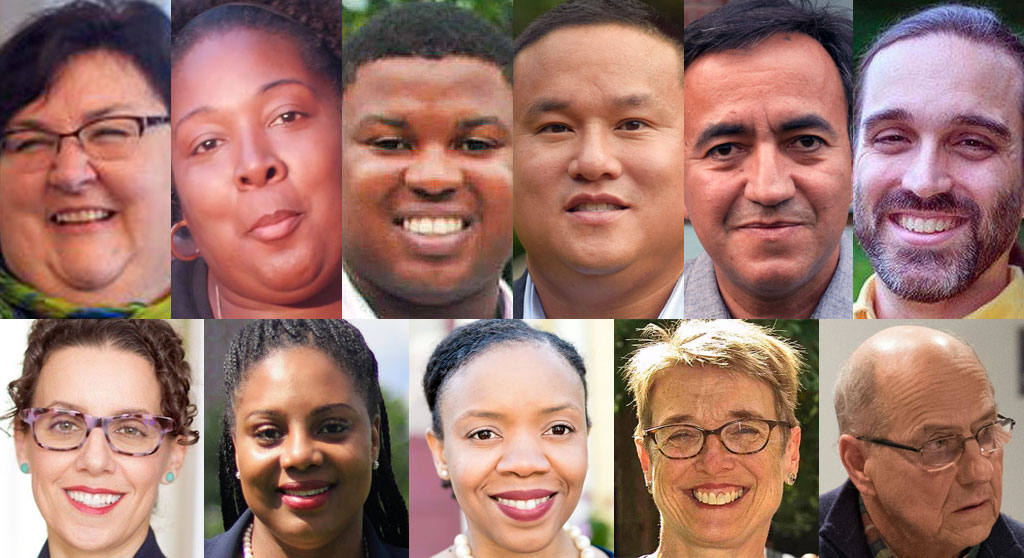 There are 11 candidates for six School Committee seats. Click this photo collage for access to profiles of each. (Not all profiles may show up on the first page of results you see.)

The School Committee election being decided Tuesday is unusual: Half of the six seats are turning over, making for a term where the majority of the committee – a seventh seat is held by the mayor, who will be elected in January from among city councillors – might be all new to the body.

Put another way, among the eight challengers, three are guaranteed to win a two-year term on the committee.

It’s more turnover than is typical, but longtime member Patty Nolan said in June that she’d decided to run for council after seven terms; Laurance Kimbrough said that he’d decided against another arduous campaign that might win him a second term; and Kathleen Kelly dropped out after three terms without public explanation.

That leaves three incumbents running for reelection: Manikka Bowman and Emily Dexter are seeking third terms; Fred Fantini was first elected in 1981 and seeks a 19th term in office. Having been on the committee for 36 years makes him the longest-serving member in Cambridge history.

Profiles of all the candidates can be found here or by clicking on the photo collage of candidates found above. (Take note that one profile may appear on the second page of results.)

All candidates were invited to interviews by parent Piotr Mitros, who contacted Cambridge Day early in his process to say that he would share his materials so they could be posted on the site. Of the 11, three did not respond to emails; one declined; and one declined to have their interview recorded. (Mitros provided interview questions to the candidates a week before the interview to give time to prepare.) Due to the length of the interviews, answers have been summarized; play the accompanying audio clips for in-depth answers.

For candidates who did not sit for those interviews, their profiles include edited and condensed responses given to questions at an Oct. 3 forum held by the Cambridge Education Association and recorded by Beck Hamlin of Cambridge Community Television. The video is also linked to from within each of those profiles.

A couple of the campaign issues

As for campaign issues this year, candidates were often heard to say they supported universal pre-K in Cambridge – a position that is itself all but universal among candidates, though implementation relies on funding by the City Council. First-time candidate Jose Luis Rojas Villarreal acknowledged at the teachers’ union forum that with space in Cambridge constricted, competition for seats as the program expands may be fierce, and could demand some tough conversations about how attendance is decided.

Kimbrough ran on a platform two years ago of “dismantling the legacy of white supremacy and white privilege within Cambridge.” His approach to that work was collaborative and thoughtful, but the problem remains and race has been a prominent issue over this campaign season – the first question asked at the CEA forum, for instance, and the topic of an entire Tuesday candidates forum held by the high school’s Black Student Union. Called “If Elected to Our School Committee, How Will You Help ‘Us’ Within CPSD’s Racial Climate,” it was attended by six of the candidates hoping to get on the committee, four of whom are people of color.

Six of 11 candidates overall are people of color, and a seventh, Rachel Weinstein, has made racial equity a key issue – inspired at least in part to run by parenting a black child who has been told things “so racially charged” that Weinstein said it took her weeks to calm down enough to have productive discussions about it at her son’s school.

But while it has been issues of blackness that have dominated racial debate, the year’s slate of candidates adds even more complexity. Christopher Lim appears to be the committee’s first candidate of Asian descent; Villarreal is an immigrant, originally from Mexico.

In past elections, each Cambridge Day candidate profile included “one view” of the candidate – an assessment of strengths and weaknesses as observed from their work in civic life in the recent past and from the campaign trail. Those short takes don’t appear on these candidate profiles, though a version may be added to the free Cambridge Day email newsletter, which is sent Sundays.