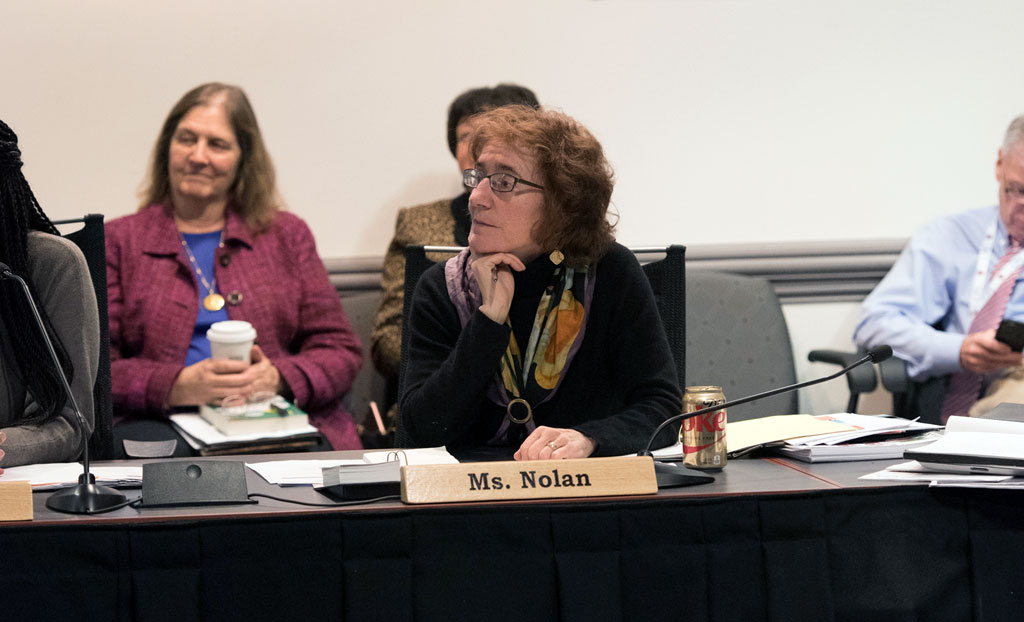 Patty Nolan, a School Committee member for 14 years, says she will run for City Council in November. (Photo: Ceilidh Yurenka)

After seven terms as a School Committee member, Patty Nolan has decided to run for a seat on the City Council.

An announcement of her decision was scheduled for Tuesday – including a playful video.

“I’ve had a really long term on the School Committee, but I’m excited to take on a new challenge, if I’m lucky enough to win,” Nolan said.

She arrives in the race with a potentially strong base of support. She’s won reelection to the committee without fail since her initial run in 2005, and remained popular. Two runs ago, in 2015, she was the top vote-getter for the committee and one of two candidates (with Fred Fantini) to achieve “quota” in the city’s ranked choice form of voting; in the 2017 election, she was the only candidate achieving quota and had grown her No. 1 votes to 3,455. Because there are more candidates running for council, quota there is often lower by 1,000 votes or more.

And Nolan has some education issues still on her mind as she prepares a council campaign, namely her shock that city planning for the Alewife area didn’t include a new school despite a general upward trend in district enrollment and a surge in homes from an ongoing construction boom.

Winning election in November could put her on the council in time to grapple with the Envision Cambridge planning process that failed to account for that need. “The process around Envision showed me there was a need for the city to be more thoughtful about planning,” she said. “It was a good start, but it was not at all the process I feel the city needed,” and the results look “problematic.”

Among the nine council incumbents, vice mayor Jan Devereux has announced she will not run for reelection – though councillors E. Denise Simmons and Tim Toomey have not said publicly what they plan to do. It is early yet, with nomination papers not available until July, but the list of challengers for the Nov. 5 elections has remained static since mid-May at five declared and a possible two more in the wings. Councillor Quinton Zondervan said he sensed the field would be smaller this year than the sprawling 26 candidates that ran in 2017.

On the committee side, only Fred Fantini has said publicly that he will run again. Members Emily Dexter and Laurance Kimbrough have said they would assess the situation after the academic year ended. “I’m 100 percent focused on all the work the School Committee has to do between now and the end of the school year. I’ll announce my decision after June 19,” Dexter has said.

That leaves vice chair Kathleen Kelly and member Manikka Bowman as unknowns for the committee. No committee challengers have filed campaign organization papers with the state the Office of Campaign and Political Finance.

For Nolan, a council run is “a natural next step.”

“I have been thrilled by my work on the School Committee, but I think it’s healthy for a city to have new leadership at different levels,” she said.

Nolan has lived in Cambridge since 1991 and raised two children with husband David Rabkin, both graduated from Cambridge’s public schools. In her runs for committee, she cited the “great training in business and strategic thinking” she got attending Harvard University and the Yale School of Management; she worked for several years for the consulting firm McKinsey until, as she said, her school loans were paid off. At that point she could go into the nonprofit and socially responsible business sector, as well as running a couple of small businesses, but the data-driven approach seemingly drilled into her at Harvard and Yale never faded. She has been a consistent advocate on the committee for programs proving their value with quantifiable results.

“My management background has made a positive difference. My first terms proved that I can get stuff done. I now have a solid record of accomplishments,” she has said, citing work to raise the academic bar, focus on improving math education, environmental stewardship, consistent focus on accountability and improving budget transparency.

She won the endorsement of state Rep. Jon Hecht during past campaigns. He credited her “lively intellect and her collaborative spirit. Her insistence on including the whole community in discussions leads to better policy-making. And her willingness to take on tough issues and take action, even when it costs her politically, makes her a true leader.”