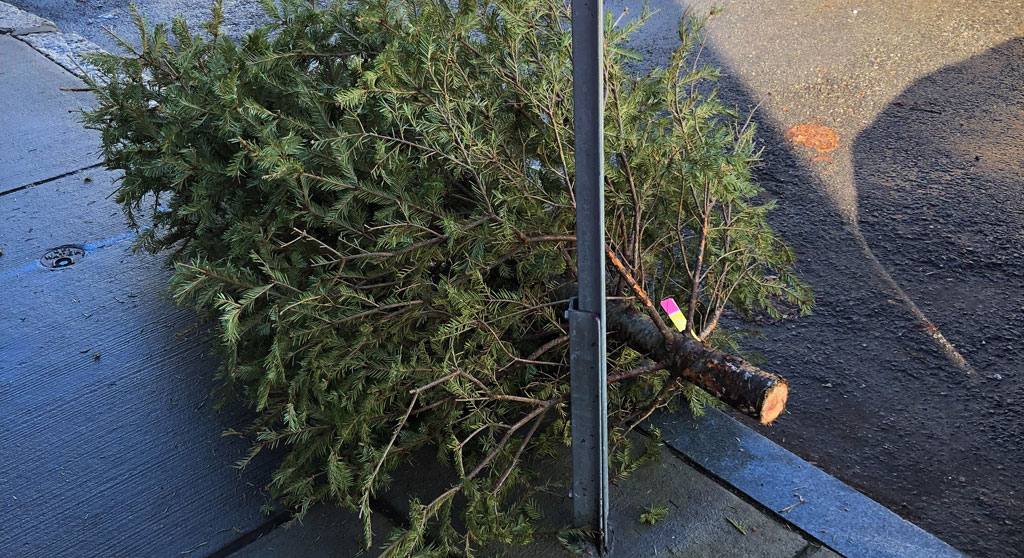 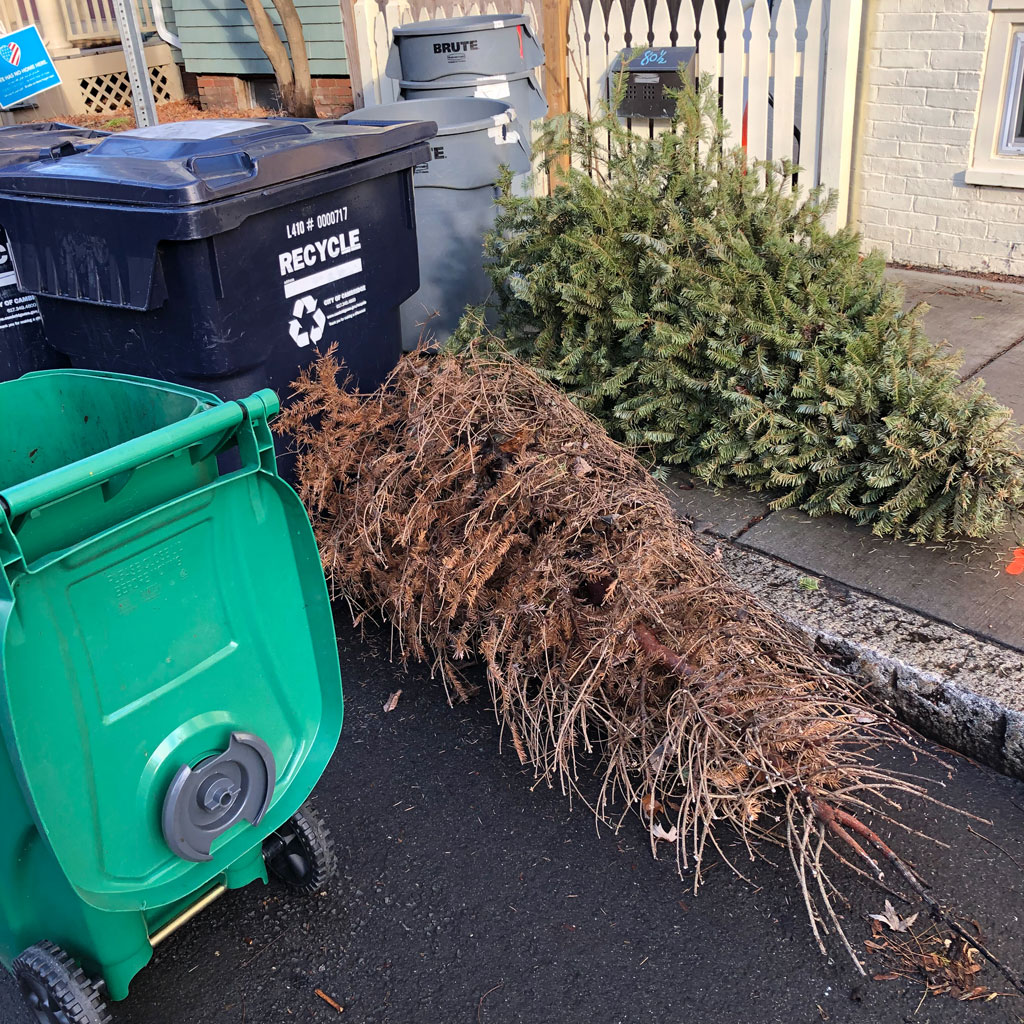 The gifts have all been opened, the sweets eaten. When it’s time to take down your holiday decorations, the city’s Department of Public Works makes it easy to dispose of your holiday tree.

In a last-second change, curbside collection of Christmas trees takes place Jan. 6-17. Place trees at the curb by 7 a.m. on your regular trash/recycling collection day or after 6 p.m. the night before.

“Trees should be completely bare, like how they looked when you picked them up from the tree farm or store,” said Mike Orr, Cambridge’s recycling director. “No tinsel, no lights, no decorations, no stand. Just a bare tree.” If you put your tree in a plastic bag to get it out the door, remove the bag once the tree is at the curb.

Residents can also drop off trees through Jan. 31 at the department’s Recycling Center (147 Hampshire St., Wellington-Harrington) during regular hours (Tuesday through Thursday from 4 to 7:30 p.m. and Saturday from 9 a.m. to 4 p.m.). 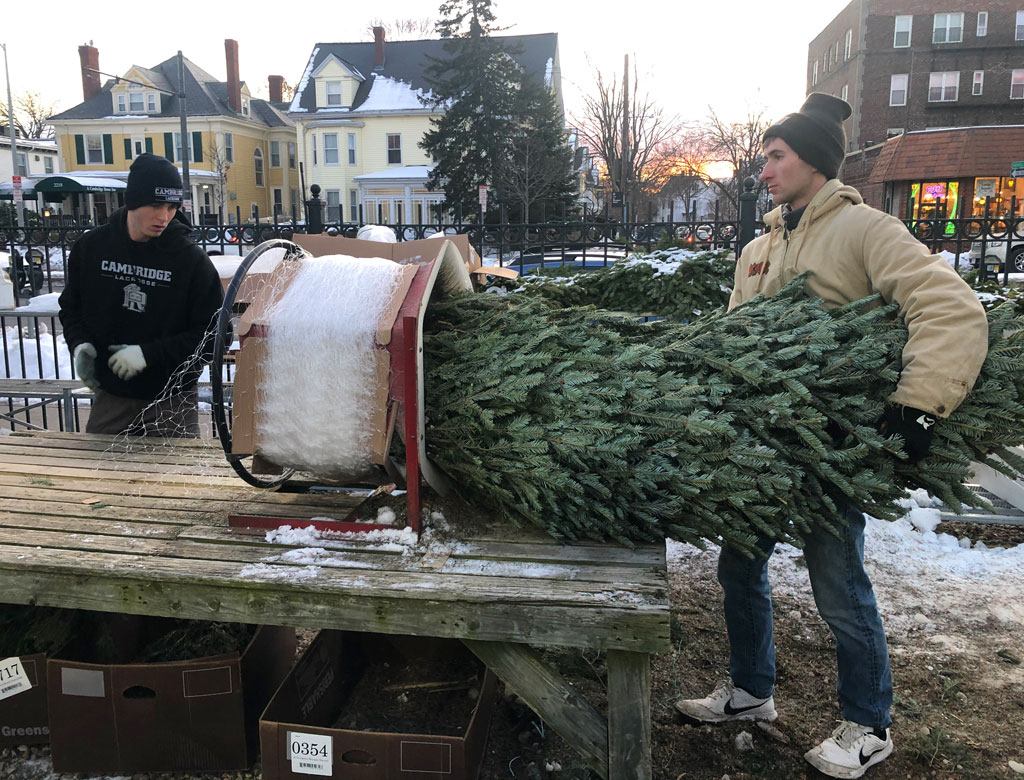 On the first Saturday in December, Pemberton Farms in North Cambridge was doing a brisk business selling trees. The air smelled piney, like Christmas. Carols played on the store’s loudspeakers as the staff helped customers select trees, wreaths and poinsettias.

According to a survey conducted by Nielsen/Harris on behalf of the National Christmas Tree Association, a trade group for Christmas tree growers, Americans bought 32.8 million real Christmas trees in 2018, spending an average $78 per tree. Along with the real trees, 23.6 million fake trees were bought in 2018 for an average $104. Artificial trees have become increasingly popular – more Americans unwrap presents around an artificial tree than a real one.

“Our Christmas trees come from Canada,” said Christopher Moulton, who has sold trees for Pemberton’s for several years. “We have two different types: balsam fir and Frasier fir.” The trees come from Eastern Plantations in Sherbrooke, Quebec, about 260 miles due north from Cambridge.

There’s some debate about whether real or fake trees are more environmentally friendly. Most researchers agree a real tree is the better choice, unless an artificial tree is reused year after year for a decade or longer.

Most fake trees are made in China. When discarded, the plastic ends up in landfills and takes years to decompose. But fake trees do have advantages, especially for people with tree allergies; those who don’t like the mess of a real tree; or those who live where real trees are prohibited.

The average natural Christmas tree is 6 to 7 feet and takes seven years to grow. Trees grown on tree farms convert carbon monoxide into oxygen, a plus for the environment. On the other hand, the real trees are treated with pesticides and trucked to retailers.

Buying locally is usually the best option, especially for those who enjoy cutting their own trees at a nearby tree farm.

Back to the garden

Through DPW’s program, Cambridge residents recycle hundreds of holiday trees each year – about 25 tons in 2018, according to Orr. Trees collected this season in Cambridge will be trucked to Landscape Express in Woburn and made into mulch.

“We’ve got a big tub grinder,” explained Paul McCool of Landscape Express. “We grind the trees into chips and base material that get mixed with bark and turned into bark mulch. You can pretty much make and sell mulch the same day, but the longer it sits, it has time to break down more, which produces a better product.”

“We sell a lot of mulch,” McCool said, “to homeowners, small landscapers, big companies like BrightView and Greenscape. In Cambridge a lot of places have our mulch.” That means the tree you recycle this winter may end up back in your garden come spring.

Martha Henry is a member of Cambridge’s Recycling Advisory Committee and writes about trash and recycling.