‘American Dharma’: Bannon in a bunker, explaining what makes him tick, tick, tick … 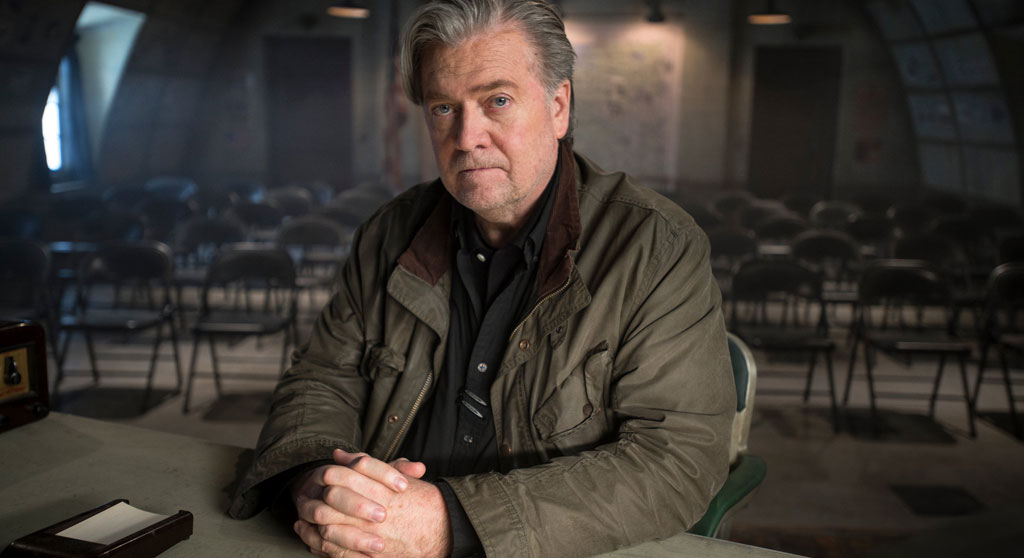 ‘American Dharma’: Bannon in a bunker, explaining what makes him tick, tick, tick …

The latest from local filmmaker and provocateur Errol Morris presents something of a rewind of the 2016 election, as well as a delve into the alt-right media machine – with a healthy side of cinema studies to boot. Morris’ somewhat controversial “American Dharma” provides plenty of space for former Trump campaign organizer/adviser and Breitbart honcho Steve Bannon to make his case for Trump and the hard right, most of it through cinematic references such as Gregory Peck’s iron-fisted general in “Twelve O’Clock High” (1949), Robert Redford’s out-of-left-field pol in “The Candidate” (1972) and John Wayne in pretty much any John Ford western. Turns out Bannon’s a fan of Morris’ award-winning doc “The Fog of War” (2003), which featured businessman and secretary of defense Robert McNamara, who like Bannon attended Harvard Business School and similarly treated war and politics as business problems and chess matches. 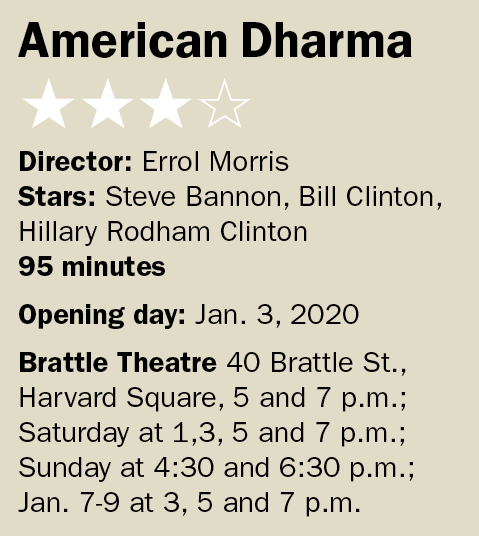 Early on, as Morris interviews the commanding agitator in an abandoned hanger – ostensibly emulating Peck’s command center in that Henry King classic – Bannon in his gushing appreciation of “Fog of War” gives Morris an insider pat on the back about filmmaking. It’s an eye-popping pause, but true enough: Bannon has 10 directorial credits on IMDB, with such right-wing propaganda docs as “Torchbearer” (2016) and “Battle for America” (2010), most having abysmally low ratings (in the 2 or 3 range, with one or two breaking the middling 5 mark). During the session, Bannon recounts his entry at Breitbart, the takedown of Anthony Weiner on Twitter and joining Trump with shrewd strategies to shift the tide in the 2016 presidential campaign. For instance: For instance: To counter the Billy Bush tape, he tried to sit Bill Clinton’s four sexual assault accusers at the front of  a presidential debate the former president would attend. The mention of Russian trolls is scant, and Hillary Rodham Clinton in her own words (via a post-election interview clip) attributes her loss almost exactly to what Bannon does: the Comey investigation and emails to Weiner.

Throughout the film, which boasts a smart score and does a brilliant job of interweaving film and news clips with public opinion overlaid via the Twittersphere, Morris, who clearly has vastly different political leanings than Bannon, affords his subject a long leash – perhaps too long – but not one that can’t be tugged on by the factual record. It’s nearly comical and hard to fathom when Bannon balks incredulously at Morris’ announcement that he voted for Hillary because he feared Trump. Later, when Morris links Bannon’s departure from the White House to the deadly Unite the Right march in Charlottesville, Virginia, Bannon does a soft shoe and reverts to his fearmongering prognostications of greater divisions to come (check out his latest venture, warroom.org.)

If there’s one thing to drink in about Bannon in the film, it’s his cocksure confidence and charisma (on display more here than when at Trump’s side). He’s a clear natural leader with patriotic zeal, but the question becomes: of whose country, and with what agenda? Morris and subject go at that, and watching the film, it’s chilling to see the spell Bannon and the alt-right can cast. Educated progressives clearly discounted that too much in the past; Morris’ film serves as stark (if accidental) reminder of that, and a timely one.

Morris will be in attendance for the Friday night opening. Tickets and information are here.