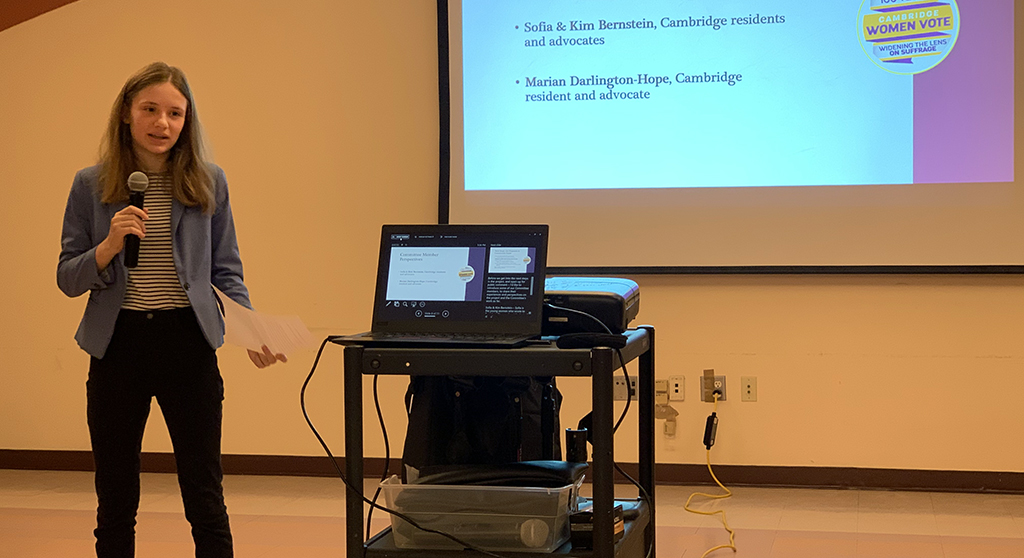 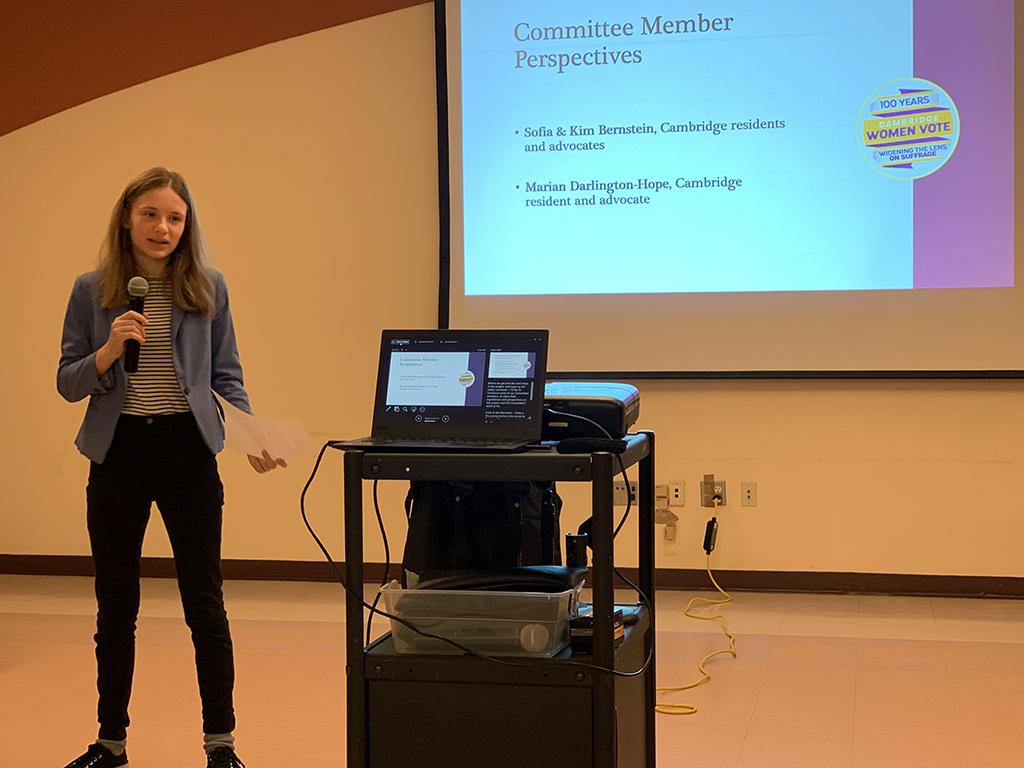 Barely a week in, 2020 is shaping up to be a banner year for women leaders in Cambridge. With the City Council’s selection Monday of Sumbul Siddiqui and Alanna Mallon as mayor and vice mayor, and with our hometown U.S. Sen. Elizabeth Warren carrying the standard for women on the presidential campaign trail, young women do not have to look far for role models. And soon a public art installation in Cambridge Common will tell the story of women’s suffrage.

This spring, in honor of the centennial of the 19th Amendment giving (white) women the right to vote, Cambridge will announce the winner of a $300,000 public art commission to commemorate the women’s suffrage movement. Four artist teams are competing to create a permanent installation in a prominent location near the north corner of the common opposite Harvard Law School.

At a community forum held Tuesday at the Citywide Senior Center, members of the Nineteenth Amendment Centennial Committee and staff from Cambridge Arts, the Historical Commission and City Manager’s Office shared a progress report on the public art commission and solicited feedback on the process. 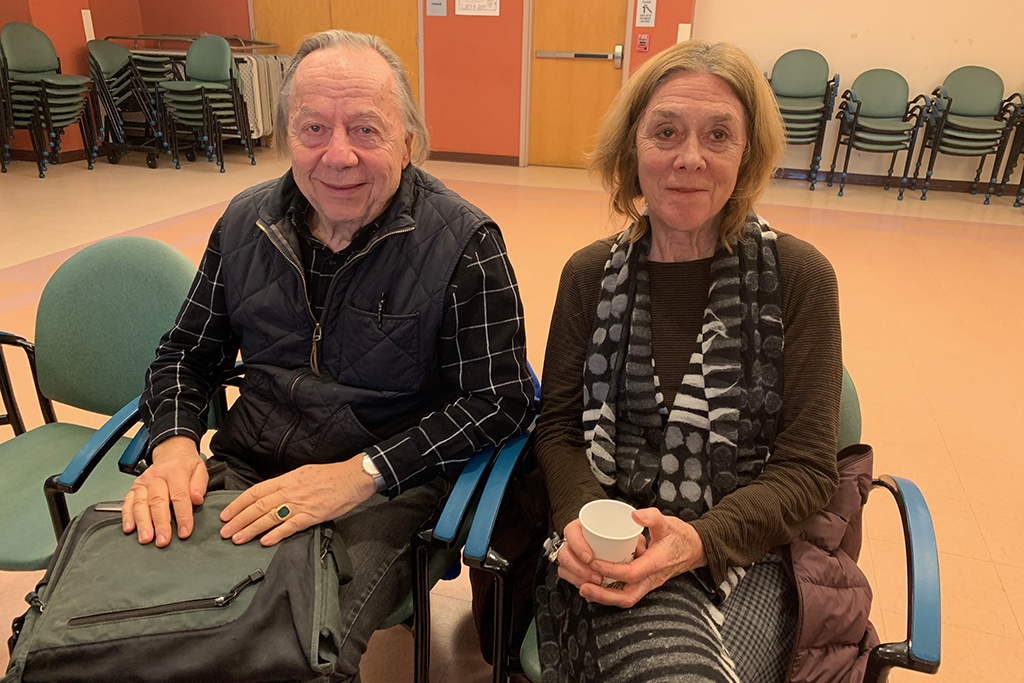 A 10-member, all-female Centennial Committee has been meeting monthly since April, said meeting facilitator Jennifer Mathews, an assistant to the city manager. In addition to touring and choosing among several possible sites for the artwork, the committee has developed 16 evaluation criteria to help shape and inform the creative proposals and to guide the final selection.

A top goal was for the art to represent and confront the complex, unfinished history of voting rights in America, as well as to redress the city’s lack of public monuments recognizing the achievements of women. Several attendees expressed a desire for an installation that would serve as the basis for ongoing, all-ages programming about voting rights and democracy. The Centennial Committee’s youngest member, Sofia Bernstein, a ninth grader at Cambridge Rindge and Latin School, talked about her hope that the art would help young people see themselves as connected to history and represented as future heroes. Committee member Marian Darlington-Hope said that “Who?” is the question she hears most often, and that choosing one women to represent the suffrage movement was not the objective of the art. Rather, she expects the installation to speak more broadly to the question of whose voices are heard in a democracy.

The choice of the Cambridge Common as location was well-received by those present, some of whom noted its accessibility to a wide range of visitors, as well as to scholars at Radcliffe’s nearby Arthur and Elizabeth Schlesinger Library on the History of Women in America. Jane Kamensky, the Schlesinger’s director, sits on the Centennial Committee, along with historian and retired Massachusetts Supreme Judicial Court senior attorney Barbara Berenson, author of “Massachusetts in the Woman Suffrage Movement: Revolutionary Reformers” from 2018.

Because Cambridge Common is in the Old Cambridge Historic District and listed on the National Register of Historic Places, the winning proposal will be subject to final approval by the city’s Historical Commission. Its preservation planner, Sarah Burks, a member of the Centennial Committee, helped develop a history of women’s suffrage in Cambridge that is available as a resource to the artists.

A jury with deep experience in public art commissions was appointed to select the four finalists from among hundreds in the Arts Council’s public art registry, said Lillian Hsu, director of public art for Cambridge Arts. The jurors were Cecily Miller of Spark Art, multimedia artist Elissa H. Hamilton (whose “Jukebox” work was chosen as public art at the the future Foundry community building in East Cambridge ) and Stella Aguirre McGregor of the Urbano Project.

The four finalists include two Cambridge-based teams: Mags Harries and Lajos Heder, a married couple whose portfolio includes installations at Fresh Pond Reservation and in the Porter Square MBTA station, and Azra Aksamija, an architecture professor at the Massachusetts Institute of Technology. Also competing are sculptor Nora Valdez of Boston and Claudia Reisenberger and Franka Diehnelt of Merge Conceptual Design in Santa Monica, California. All four teams have personal connections to gaining citizenship and the ability to vote in the United States, Hsu noted.

One of the local finalist teams, Harries and Heder, attended the Tuesday meeting to listen to the public’s questions and suggestions. Heder observed dryly that for most of the meeting he was the only man in the room. As the forum wrapped up, Heder was joined by Marlin Kann, a teacher at the high school co-leading a #HerStory curriculum in parallel with the centennial events and programming initiative from the “Women Vote 100” Committee. Led by councillor E. Denise Simmons, the centennial events committee kicked off its series in September with a panel discussion on women’s voting rights called “Claiming Our Seats.”

A June 2018 council policy order set the public art commission in motion; in April the council appropriated $300,000 for the commission winner to cover all expenses, including design, materials, fabrication, installation and travel. Each of the finalist teams will get $2,000 in compensation for their conceptual proposal and presentation.

The finalists will attend the next community meeting, from 6 to 8 p.m. Feb. 12 at the Citywide Senior Center, 806 Massachusetts Ave., Central Square. They must submit their final proposals by April 13 and present them informally at a community forum April 29. The proposal materials will be displayed publicly between mid-April and mid-May. A to-be-named selection committee will make the final choice following a formal public presentation by the artists May 13.

There will be a public celebration of the winning proposal in late August to mark the ratification of the 19th Amendment on Aug. 18, 1920. Fabrication and installation of the art is expected to take about two years.