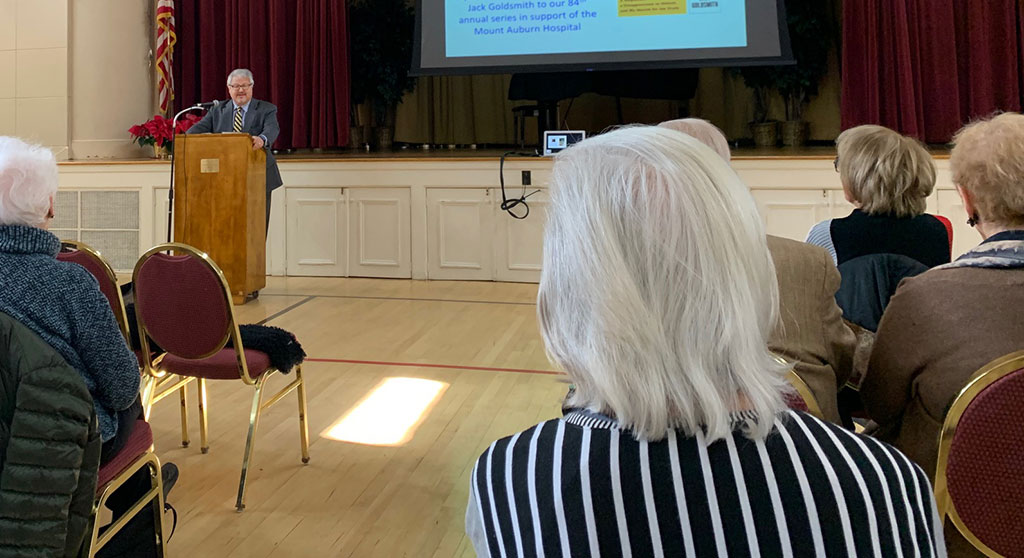 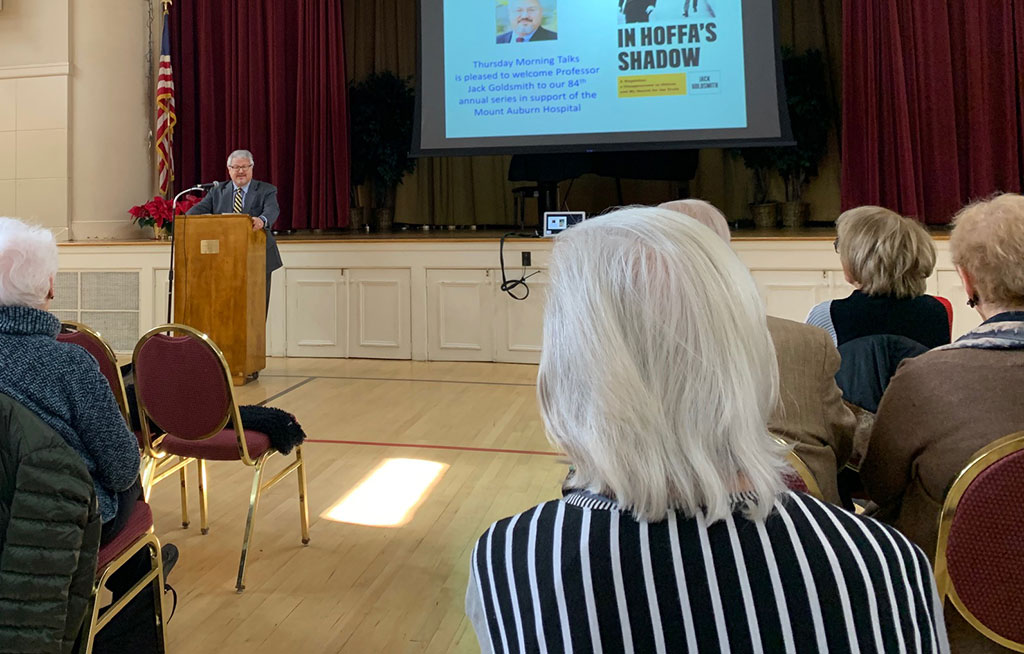 I’ve lived in Cambridge for more than 26 years, serving as an elected official for the past four, and yet I’d never heard so much as a whisper about one of the community’s longest-running philanthropic and intellectual traditions: the Thursday Morning Talks benefiting Mount Auburn Hospital. Last week, I had the pleasure of attending the first of the venerable series’ 84th season, and I’m looking forward to attending as many of the next seven talks on the 2020 schedule as my schedule permits.

Here’s a little background gleaned from a brief history of the series, published in 2011 for its 75th anniversary year. Billed originally as The Refreshing Hour, the talks began in 1936 in the Brattle Street living room of Mrs. Sterling Dow. (In that era women were identified formally with their husband’s first name. She was born Elizabeth Sanderson Flagg.) Mr. Dow was a distinguished professor of classics, history and Greek archaeology at Harvard. Between 1957 and 1976, the Dows lived at 159 Brattle St., known today the Hooper-Lee-Nichols House and home of the Cambridge Historical Society, professor Dow having been appointed the Society’s first resident scholar and curator. Curiously, he was never one of the Thursday Morning speakers himself, though I’m sure he would have had as much wit and wisdom to impart as the many other Harvard and Massachusetts Institute of Technology faculty who have filled the speaker roster over the past nine decades.

Mrs. Dow served her guests warm (beef) bouillon in china cups, a quaint tradition that continues today. As a vegetarian, I did not partake, but the broth’s savory aroma filled the capacious auditorium in the Holy Trinity Armenian Church on Brattle Street and reminded me, not unpleasantly, of convalescing from the flu as a child. The speaker series is held every Thursday in January and February, and on a bitterly cold morning more than 260 people turned out for the first talk whose advertised speaker, ambassador Wendy Sherman, had to cancel on short notice due to the escalating tensions in Iran. Her replacement, Harvard Law professor and author Jack Landman Goldsmith, who arrived from Washington less than an hour before his talk, did not disappoint.

Goldsmith talked about his 2019 memoir, “In Hoffa’s Shadow,” which tells of his relationship with his stepfather, Charles “Chuckie” O’Brien, a close friend and union associate of Jimmy Hoffa. O’Brien, who is still living, was long believed to be responsible for the labor leader’s still-unsolved disappearance in 1975. He has denied it all along. Goldsmith stated that a few years ago the FBI concluded that O’Brien was no longer a suspect, but later reneged on their promise to exonerate him publicly. The book is Goldsmith’s apology for having doubted and disowned his stepfather for two decades, changing his last name to disassociate himself when he decided to pursue a career in the law and “throwing him under the bus” when seeking security clearances for government jobs. It is also the conservative law scholar’s indictment of the FBI’s investigatory tactics, which Goldsmith saw firsthand as a high-ranking attorney in the departments of Defense and Justice under George W. Bush. Goldsmith called Martin Scorsese’s Hoffa film “The Irishman” the “final indignity” to his stepfather’s reputation because the film portrays Frank Sheeran (played by Robert De Niro) as Hoffa’s right-hand man and confidant, a role that in real life belonged to O’Brien. Goldsmith was a recent guest on NPR’s “Fresh Air,” if you’d like to hear the story in his own words.

The speaker next Thursday, ambassador Samantha Power, is sure to be a big draw. Power first spoke to the group in 2004 when she was a visiting lecturer at the Kennedy School and had been named one of Time magazine’s 100 most influential people. Arrive at 10:15 a.m. for bouillon and mingling and be in your seat by 11 a.m. for the start of the hourlong talk. Best-selling novelist and Cambridge resident Claire Messud will speak Jan. 23). The City of Cambridge waives resident parking rules during the event.

The Thursday Morning Talks are organized by a volunteer committee and tickets are by subscription ($125 for the season) or individually at the door ($20). The speakers are not paid an honorarium, but some sign and sell copies of their books at the event. All proceeds from tickets and subscriptions go to Mount Auburn Hospital; last year the talks netted the hospital $53,000.