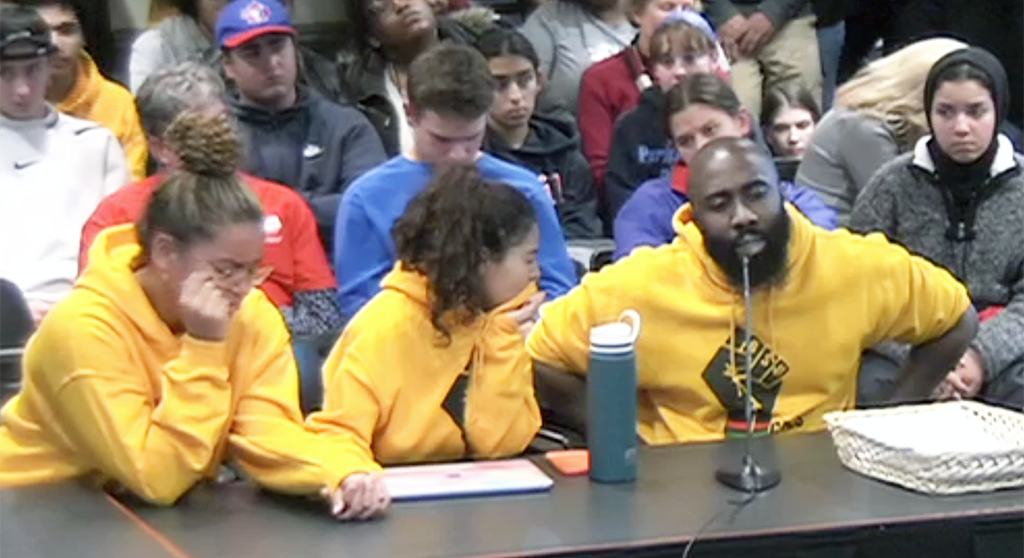 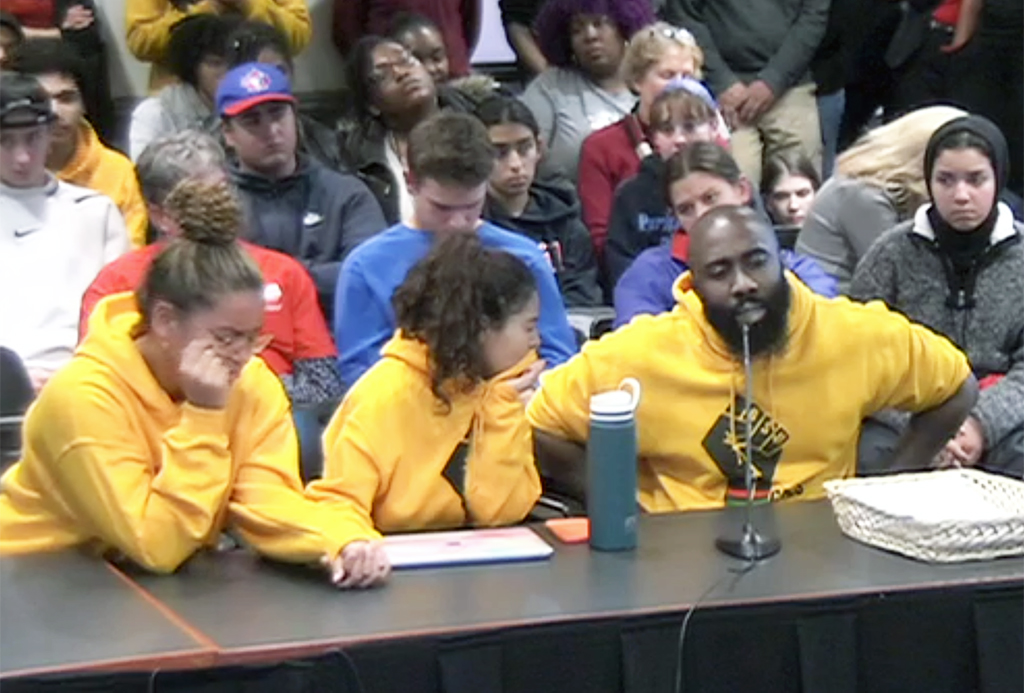 Kevin Dua speaks at a December meeting of the School Committee, joined by two members of the Black Student Union.

Cambridge Rindge and Latin School history teacher Kevin Dua is no longer listed in an online staff directory, and it is unclear if he remains an employee at the high school.

Asked on Wednesday if Dua was still teaching for the district, a spokeswoman said it couldn’t be confirmed. “I will get back to you as soon as I have accurate information and a response” from administrators, said Rosalie F. Rippey, the district communications manager.

A member of the Black Student Union, which Dua has been advising since he came to the district and revived it in 2017, also said – without specifics – that it would be difficult for members to comment due to the “many things” the club is facing. But teachers at CRLS were reportedly being told by students that Dua is on administrative leave, while getting no information from Cambridge Public Schools administrators.

Even a School Committee member reached for comment didn’t have information to pass on.

It has been issues of race keeping Dua in the news for the past couple of years. He has helped students call for an end to racist offenses at the high school through YouTube videos and testimony to the School Committee; more recently he led a classroom panel discussion at which committee member Emily Dexter used a racial term in an academic context, leading to her resignation after a year of furor.

A criminal complaint of a wiretap violation was lodged against Dua in mid-December, alleging that he used a phone to secretly record a conversation with a staff member Oct. 24. He played it for a school dean Oct. 31 and was told it is illegal in Massachusetts to record a conversation without all participants’ knowledge, according to the file at Cambridge District Court in Medford. The dean told vice principal Robert Tynes and principal Damon Smith, who met with Dua on Nov. 6. Dua said he had not been aware that the recording was illegal, and that he had already deleted it.

Smith later told the staff member that Dua had recorded their conversation, and in late November, the staff member reported the incident to Cambridge police, who opened an investigation. Dua has retained Attorney Kareem Morgan to represent him. Dua will be arraigned Feb. 13 at the court.

It is a crime in Massachusetts to record a private conversation without the participants’ permission, and it carries a possible penalty of up to five years in a state prison, up to 2.5 years in jail, or a maximum fine of $10,000 – or a combination of these punishments.

Drawn to the district

Dua, the Massachusetts 2017 History Teacher of the Year while in the Somerville school district, said that year that he was drawn to Cambridge in part because he was moved by the students’ activism and their yearning to see changes in the school and community. Dua said he could see a role for himself at the school, especially in the education of students of color. More recently he said in testimony before the committee that he was “recruited” to come teach in Cambridge.

In July 2018, students said that months of effort to raise awareness had resulted in little but stress and fatigue, and that they were concerned Dua was facing pressure to look elsewhere for a job. Smith said Dua’s job was safe.

There was around four hours of public commentary at the December committee meeting about the “N-word” incident, and Dua made a statement midway thanking BSU members, students, teachers and community for their support, and attesting to the toll the situation has taken on his health. Dua said that while he is not resigning, he is unsure of his future in Cambridge or in teaching. “This entire process has broken me,” Dua said. “I can’t retain my mentality anymore, it is done.”

Students came quickly to his defense, speaking emotionally and saying they would do anything for the CRLS teacher they felt always had their back.

Reham Zeroual, a BSU co-president, called Dua “the one black teacher we’d all literally die for.”