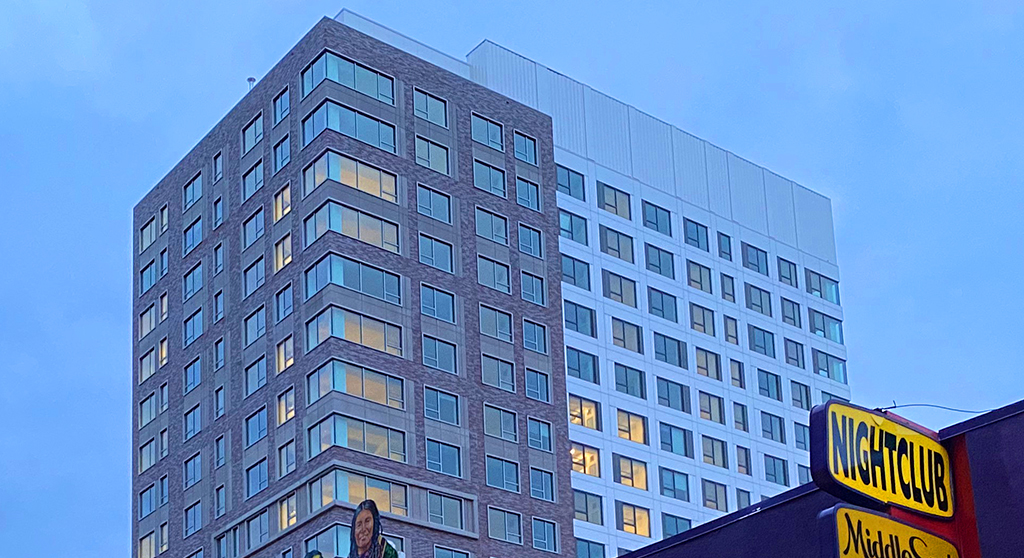 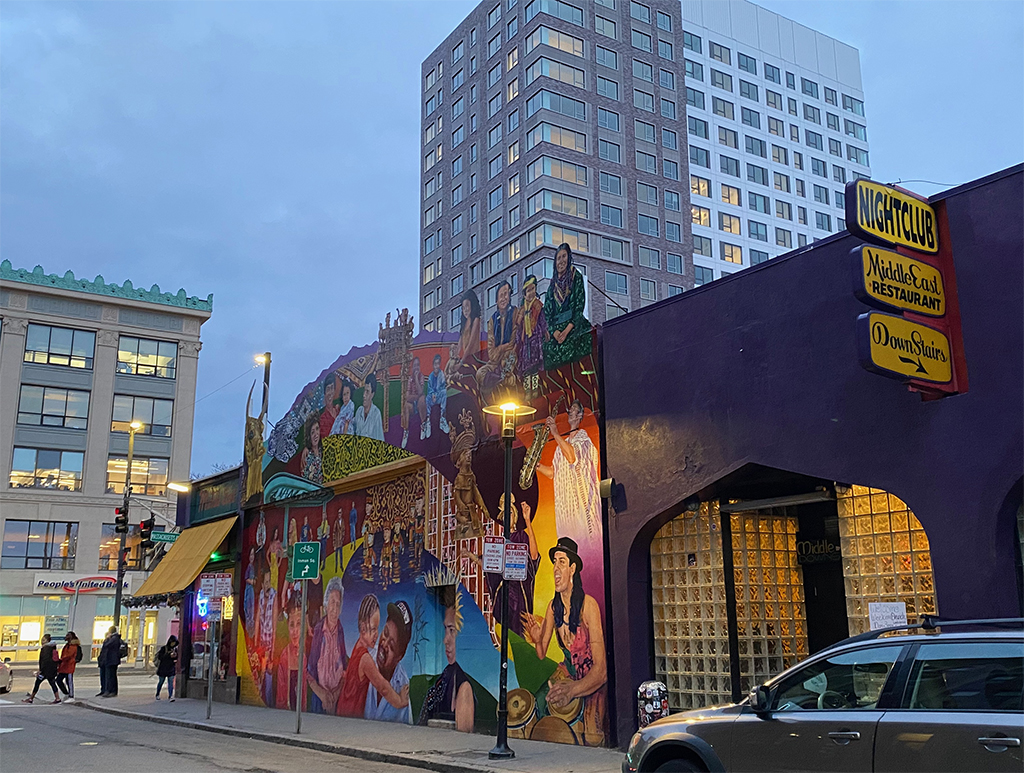 A new high-rise tower is seen over The Middle East Nightclub and Restaurant complex in Central Square. (Photo: Marc Levy)

Two citizen-led attempts to protect Central Square against changes threatened by a wave of development have been begun and scrubbed since it was learned that The Middle East property is on the block.

News came in late January that the nightclub and restaurant complex was for sale for $40 million – up from $7.1 million just five years ago – and there is much more looming that could change the square dramatically, lawyer and developer Patrick Barrett said.

“I found a few things coming down the pipe that I think will make The Middle East look like the easiest loss in Central Square,” Barrett said, suggesting that there would be announcements within the next six months that would make it impossible to reverse the loss of virtually every local arts institution. 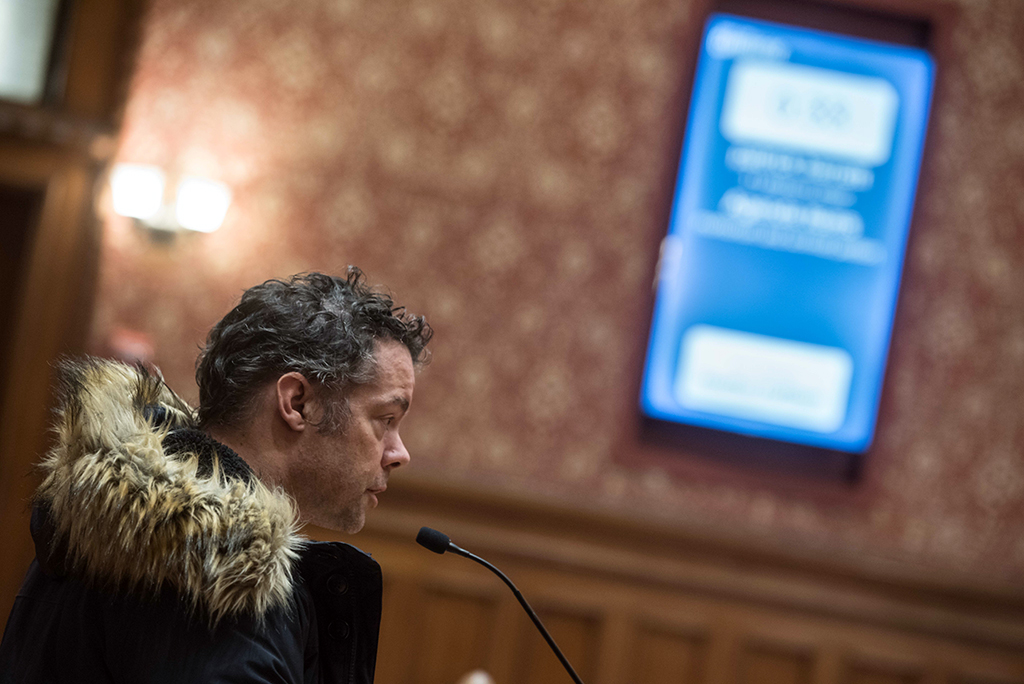 Around $250 million worth of real estate traded in Central last summer, Barrett said, and he expected to see double that in the months ahead.

Already the square has seen the departure of clubs, galleries and performance spaces from All Asia and the Out of The Blue Art Gallery to Mobius and Green Street Studios, as well as the nearby EMF Building art and music community, where bands released and recorded albums. The [email protected], another dance space, is threatened by its landlord’s plan to convert the building into 29 micro-units. The project will “strip one more arts organization from the district,” director Callie Chapman told the Board of Zoning Appeal, “contributing to the ongoing deterioration of stability for the arts in Cambridge.”

The half-block parcel that includes the Cantab Lounge is also suspected to be at risk, with residents saying it is either for sale, under a purchase-and-sale agreement or already sold; phone messages and emails were left Tuesday with contacts listed with the Secretary of the Commonwealth and officers of the Dedham land trust that owns the property. If sold and redeveloped, it could remove from Massachusetts Avenue not just the venerable bar and performance space of the Cantab and its downstairs Club Bohemia – its second death notice in two years – but a 7-Eleven, the ABC Pizza House and Mass Chicken eateries and Coolidge Cleaners. The parcel stretches around the corner to Pandemonium Books & Games on Pleasant Street, ending at a city-owned parking lot. 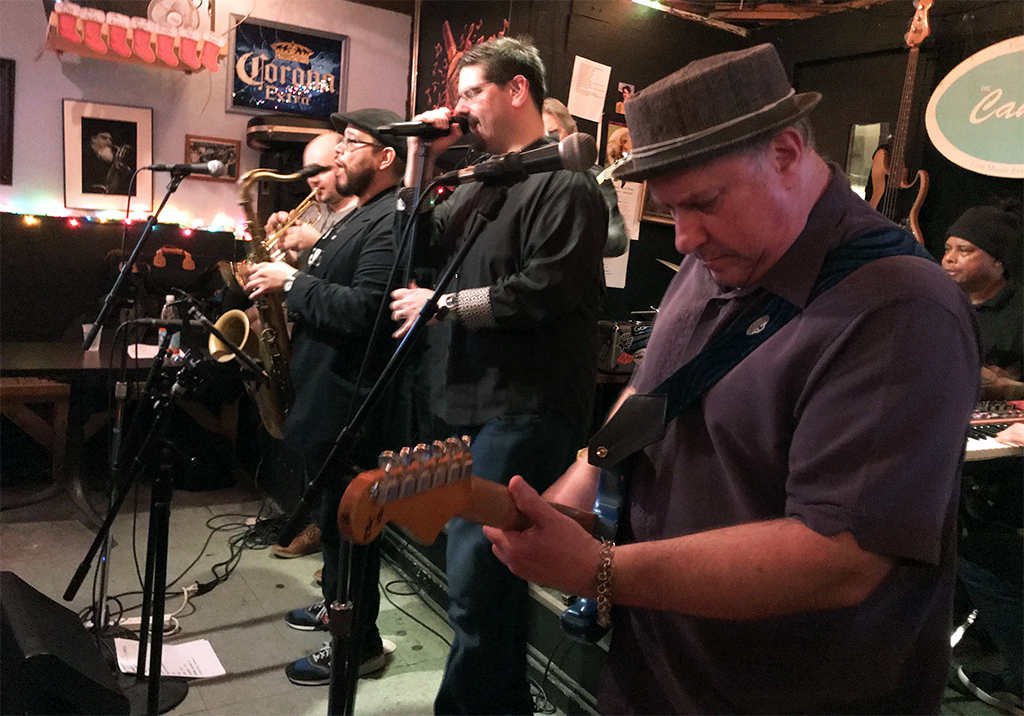 The Chicken Slacks have a residency at the Cantab Lounge in Central Square. (Photo: Marc Levy)

To Steve Ramsey, general manager of the 82-year-old Cantab, the sale is just “rumors,” but he said each business in the parcel operates month to month except for Pandemonium, which has only a two-year lease. And while Mass Chicken’s owners have been trying to sell the business, it’s complicated by the landlord’s refusal to give new leases.

The Cantab has music upstairs nightly, much of it R&B – Little Joe Cook, famed for his 1957 hit “Peanuts,” famously had a residency there until his death in 2014 – and Mickey Bliss’ Club Bohemia hosts rock downstairs, pausing Wednesdays for the long-running Boston Poetry Slam. All could be wiped away.

“The whole thing is frightening. The concept of a cultural district is going down the tubes,” said Nancy Ryan, a chair of the Cambridge Residents Alliance who has been active in development politics for many years – as well as living not far from Central Square on Ashburton Place.

Lee Farris, another CRA member who helped write recent Central Square zoning language with Barrett, agreed that redevelopment of the Cantab parcel was worrisome. “The Middle East is an iconic anchor of the square and a destination, but in terms of future impact on what the square feels like, the parcel where the Cantab is, is even bigger,” Farris said.

While The Middle East may have the bigger reputation, “there’s no place like [the Cantab] either,” Farris said. 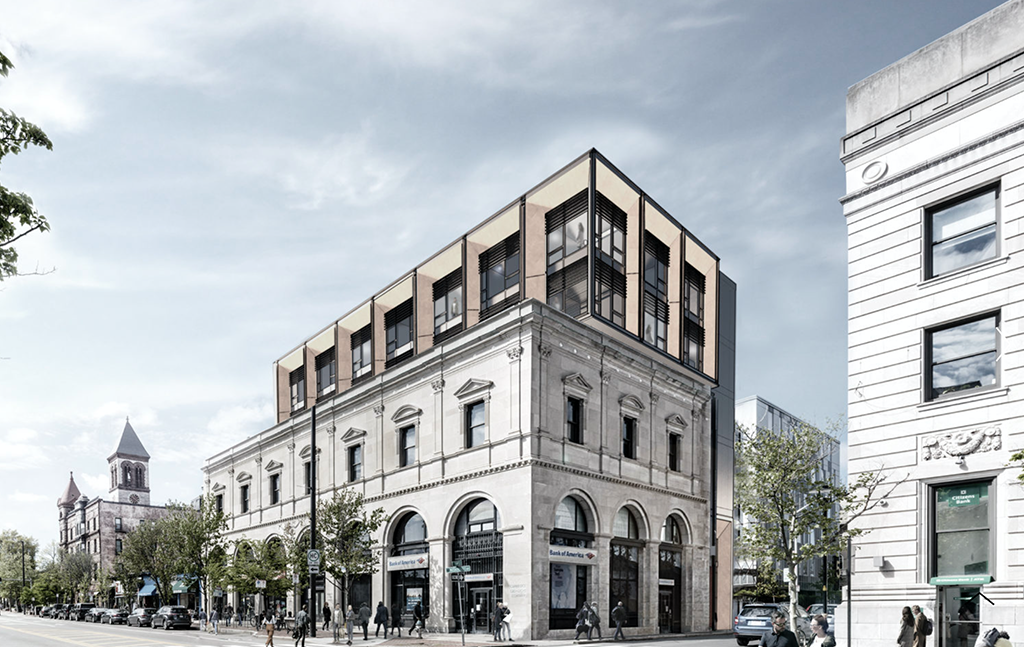 A mixed-use development topped by a boutique hotel is planned for Central Square, across the street from an 82-year-old nightclub rumored to also be facing redevelopment. (Image: Chevron Partners)

In addition to potential development bringing yearslong construction at The Middle East property and one block over, at the [email protected] building (a project seeking the blessing of the Central Square Advisory Committee at its Feb. 19 meeting), Central Square faces not just potential work at the Cantab parcel, but across the street at 727 Massachusetts Ave., where Chevron Partners plans to replace a Bank of America branch with The Gaslight Building: a hotel overlooking offices and basement and ground-floor retail and restaurants. (One block north of The Middle East at 50 Bishop Allen Drive, attorney and developer Sean Hope plans to expand 11 units of housing on three floors into a seven-story building with 22 units of housing.)

At the Cantab property, councillor Patty Nolan – like Ryan – imagined a residential tower rising to match the 195-foot height of the Watermark Central building in Lafayette Square. After the “spot zoning” awarded the project in 2017, there would be “nothing to prevent” developers from demanding to go just as high at Central Square’s opposite end, Nolan said. (In a way, it would fulfill the original vision for paired towers by the developers of Watermark Central, then under the name Mass+Main, though they hoped to build at Massachusetts Avenue and Prospect Street.) 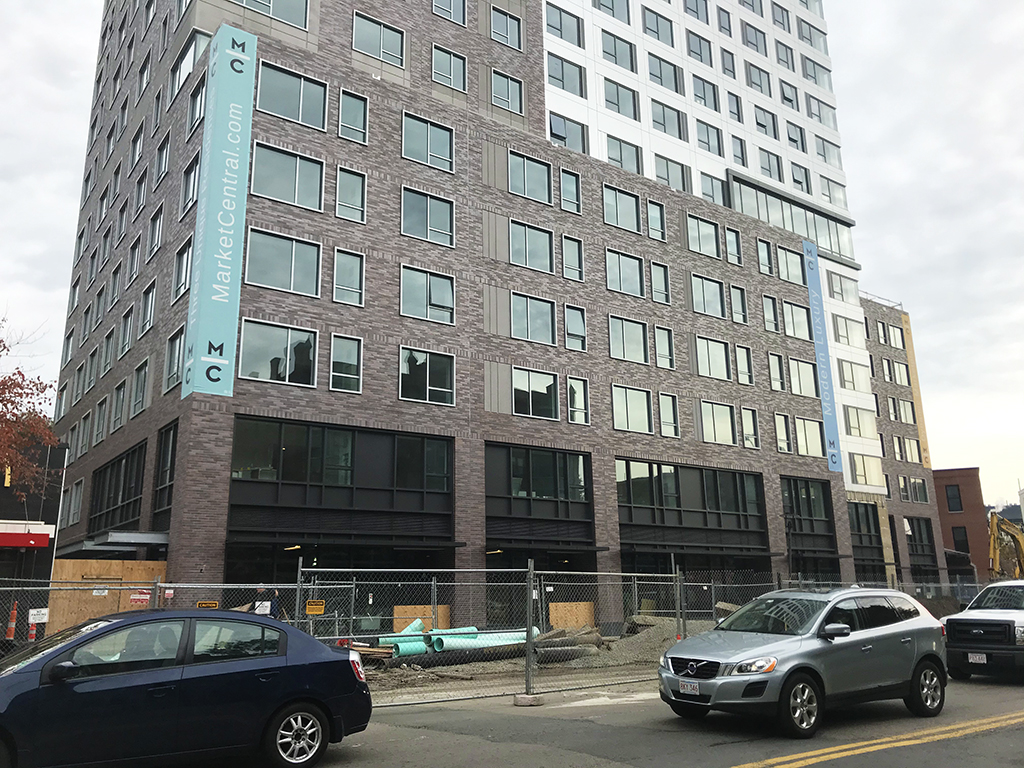 Development and construction in Central Square, like at Watermark Central as seen in October, would have faced a moratorium in a plan described as coming to the City Council. (Photo: Marc Levy)

The overlapping projects may not just change Central Square forever by closing businesses and calling for higher rents from replacements, but deaden foot traffic for existing retailers and restaurants. Both risk a blight like the one afflicting Harvard Square. Institutions are already struggling from years of construction that have made the neighborhood less attractive and harder for patrons to get to, said Barrett, acknowledging being part of the problem as developer of a boutique hotel on Main Street in Lafayette Square. “We’re not looking so great, and it’s difficult for anyone to program, for anyone to keep business steady,” Barrett said. “It’s really gone for a little bit too long in terms of the construction.”

But it is the risk to Central Square’s identity by losing The Middle East that has most alarmed residents, despite assurances by owners the Sater family that they intend for some version of The Middle East to stay open in whatever the sold property becomes. It’s widely known that a prospectus sent out by the Hunneman real estate brokerage pitches the space overhead for lab uses, and a builder can go as high as 80 feet in the Middle East’s business-zoned district even without a special permit.

“That’s ridiculous. Lab space should be nowhere near residences,” said city councillor Dennis Carlone, an architect and urban planner, on Monday. That lab space above The Middle East is a possibility is the result of a table of uses that he said the council has been urging the Community Development Department to update for several years and multiple council terms.

A move to landmark the largely single-story Middle East property, which some felt could deter buyers at the asking price, began when news broke of the sale. The language was ready to go and needed just some signatures before presentation to the council, said Suzanne Preston Blier, who helped craft the zoning petition after winning a similar landmarking for the EMF Building after it was bought for transformation into high-end office space. But Barrett and others felt it didn’t solve the bigger problem, and Blier ended the effort Jan. 28.

Barrett’s approach was to sound out residents and officials about a development moratorium that would give councillors a chance to look anew at the the so-called “C2” plan – part of a reenvisioning of Kendall and Central squares known as K2C2 resulting in zoning and design recommendations in 2011, led by $350,000 consultant Goody Clancy. Even coming after earlier Central Square envisioning processes, it took 18 months, followed by a consultant’s report that raised questions of its own, after which the reports and action items essentially faded from public view as city planning officials decided on their own to implement the findings parcel by parcel as developers came forward with projects. But guiding principles and specific suggestions for civic identity, housing, parking and transportation issues, retail and nonprofit uses, public spaces and the potential for development of city-owned property were never addressed as a whole. There was a brief second attempt at working with C2 recommendations in 2016, three years after a final report was released. 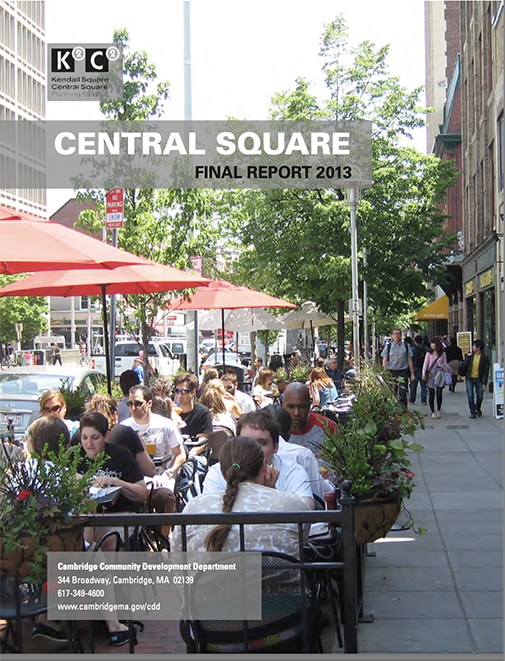 The “C2” report of recommendations released in 2013. Click on the image to read the report.

“There was a lot in C2 that would have prevented all of this from happening,” Barrett said. The new proposal would incorporate suggestions from the arts task force last term run by councillor Alanna Mallon, now vice mayor, and look at what Somerville did to prepare Union Square for getting a green line T stop.

Barrett wrote his own zoning for Central Square that was ordained in February 2017 that on Tuesday he called “like a baby step” of the C2 recommendations because “at the time I didn’t think it was possible to do it all.”

Yet on Thursday, Barrett said he hadn’t filed his call for a moratorium and C2 revival because he’d struggled to find support for the move among city councillors. Carlone agreed a moratorium “probably wouldn’t pass.”

Barrett, acknowledging that the C2 zoning solutions are now seven years old, said he continues to look for ways to preserve the unique culture of Central Square.

Landmarking and The Middle East

In late January, Jason Weeks, executive director of the city’s Cambridge Arts agency, endorsed the idea of a landmarking, using the Daniel Galvez mural “Crosswinds” painted in 1992 as an example of why.

With the halting of the landmarking effort, residents understood that Cambridge Arts at least still supported landmarking that mural. But Weeks did not respond to a question about it.

One of the signers of the aborted petition was Nicola Williams, president of The Williams Agency marketing firm and a lead organizer of the annual Cambridge Carnival – which has kicked off from The Middle East before parading to Kendall Square. Williams said she worked with the club years ago to bring in national-level artists such as The Sun Ra Arkestra and Black Uhuru.

Her goal in signing the petition, Williams said, was to preserve The Middle East without taking away the Saters’ reward for their hard work.

“Joseph and Nabil and Sonia and other family members have worked 100 hours a week consistently for many years, and I know it can take a toll on people and want to thank them for what they’ve done for the community. The family has been so generous, and they deserve to get a return on their investment. I support them having to sell if that’s what they feel they need to do,” Williams said. “But at the same time, we need to preserve their legacy in some way and form and shape. It’s been a community treasure, and it’d be a huge loss to the community to not [have] it anymore. The challenge is, how do we preserve such an important part and legacy of the square?”