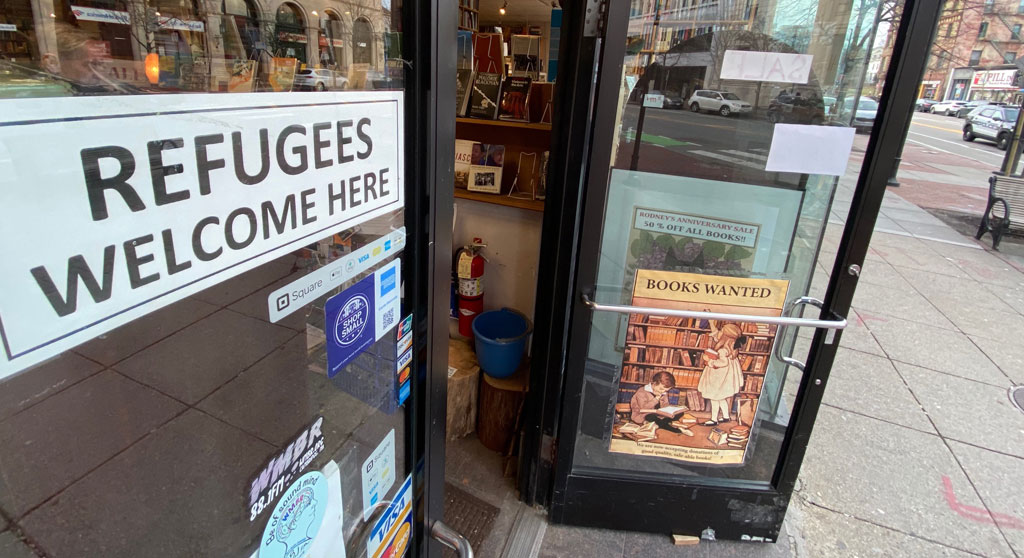 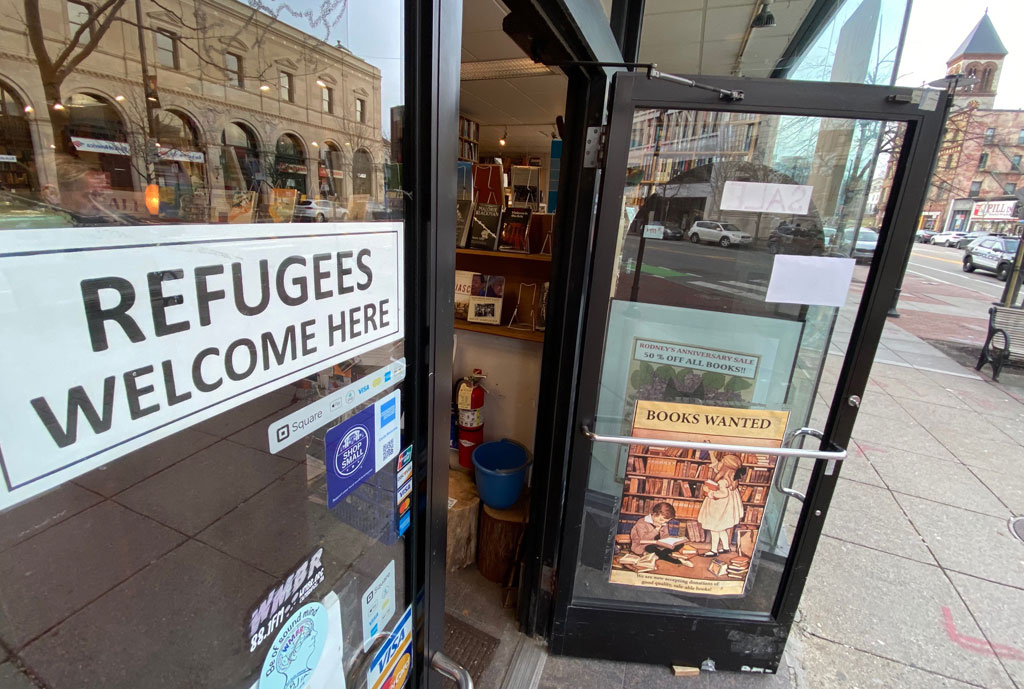 City Hall, where councillors passed a Welcoming Community Ordinance on Monday, is seen in the background behind Rodney’s Bookstore in Central Square. (Photo: Marc Levy)

Intended to clarify Cambridge’s “sanctuary city” status, a Welcoming Community Ordinance was adopted Monday by the City Council with a mixed message and much confusion, though it did make two simple changes helpful to undocumented immigrants: making court summonses instead of arrests the default when police find unlicensed drivers, and telling officers to look for ways to avoid impounding the cars of unlicensed drivers.

The law was proposed to “declare that all are welcome here and to increase public confidence in Cambridge’s government” with guidelines for its involvement in federal immigration enforcement.

Written with input from Cambridge police and Laura Rótolo of the state America Civil Liberties chapter, the law makes clear that no officer will do the work of a federal immigration voluntarily. The hangup came with its reminder that state and federal law may require some cooperation. 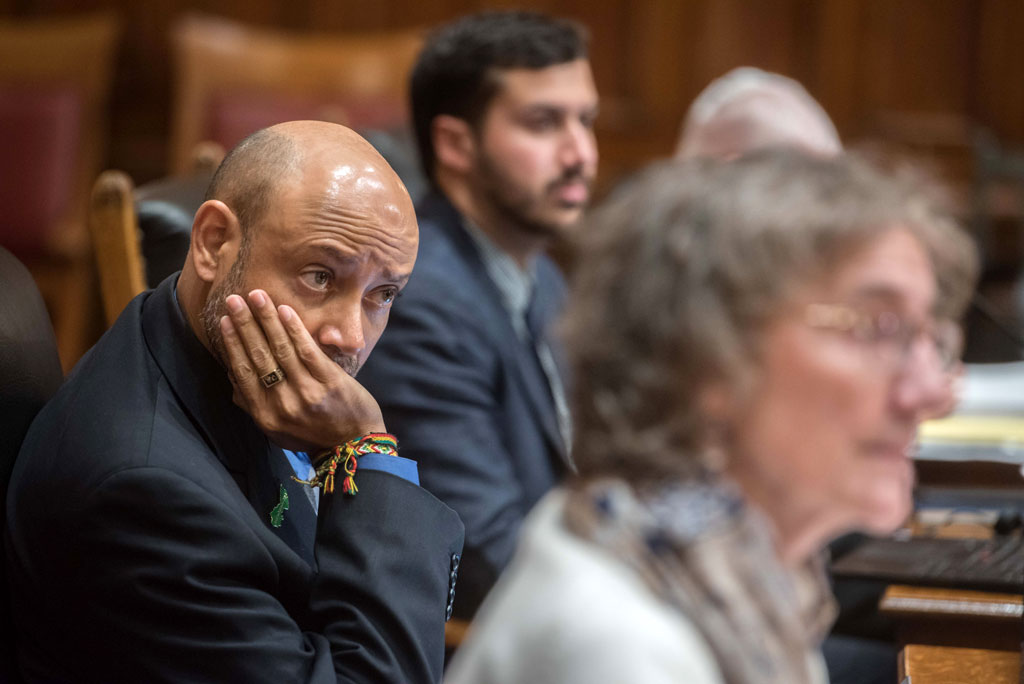 “I don’t know which federal or state laws would require this, but at the current moment our federal government is putting people in cages and torturing them and allowing them to suffer and some cases die. So for us to have language in this law that says that we are going to comply with unspecified federal laws to reveal someone’s immigration status is deeply concerning to me,” councillor Quinton Zondervan said.

The solution was ultimately simple: Changing language in the city ordinance to cite a specific federal statute – one declaring that no government entity can keep information about a person’s immigration status from the U.S. Immigration and Naturalization Service.

It helped that each of the nine members of the council were in favor of the principles underlying the law, which had been shepherded by councillor Dennis Carlone since May through a long municipal process. Most councillors expressed interest in seeing the ordinance passed immediately, rather than seeing it delayed by more examination of changes made since an Ordinance Committee meeting, as Zondervan hoped.

Arriving at that conclusion and enacting it through a series of amendments took well over an hour, including an attempt by Zondervan to bump it for one regular meeting by using his “charter right”; mild debate between the city clerk and city solicitor whether that was allowed; a recess of several minutes to hash it out; proposed retaliatory amendments; confusion over what was being amended and why; and attempts by councillors to take back their votes in apparent angry confusion over the process, despite not changing their point of view about what they were voting about.

“In practice, our police officers are prohibited from inquiring about immigration status,” police commissioner Branville G. Bard Jr. said. The general language about compliance is included “merely so that the ordinance itself doesn’t run afoul of federal law.”

It copies an ordinance in the town of Amherst already vetted by the attorney general for “something that we can use right now” instead of seeing it held up in litigation, though the included federal law had been found unconstitutional elsewhere, city solicitor Nancy Glowa said. “We could see if we’re challenged or not, and we would certainly defend this, and I think that given the result in other jurisdictions we would hope that it would be found unconstitutional in our jurisdiction as well,” she said.

But the language as proposed obliged the city to obey the federal government, which “tomorrow could pass a law that says we have to provide them with certain information,” Zondervan said. “And then our law forces us to comply with that.”

Despite approval by the ACLU and Ben Echevarria, executive director of The Welcome Project, an immigrant rights group in Somerville, first-term councillor Jivan Sobrinho-Wheeler agreed with Zondervan that the new language was a lot to pass without more discussion, and unsure why it was necessary if federal law always supersedes state and local law. “To have it be struck down I think would be an opportunity that we should open ourselves up to,” Sobrinho-Wheeler said.

Zondervan said he wanted the language of compliance removed completely, since “part of the purpose here is to challenge federal law,” but as a compromise he proposed replacing the general language with reference to a specific statute, repeating: “I am not in favor of referencing it at all. But if we feel we must do that, I would urge us to specifically reference it here and not to mention some unspecified federal or state law, because we don’t know what federal or state laws are going to be passed that we are suddenly agreeing to.”

Glowa agreed the approach made “a lot of sense,” and the council proceeded to vote on Zondervan’s amendments, with Zondervan in opposition to underline that he was “not in favor of referencing it at all.”

Despite him signaling this before the vote, several councillors seemed mystified – or, in the words of councillor E. Denise Simmons, “totally confused and highly annoyed.”

As Mayor Sumbul Siddiqui clarified that Zondervan was voting against his own amendment, a woman’s murmur was captured on microphone from the far side of the room: “Is this a joke?”

Councillor Marc McGovern said that, if Zondervan “doesn’t believe in his own amendment, then I’m not sure why I would vote in favor of it.” Even after Zondervan explained again that he wanted no compliance language in the law at all – he wound up explaining his vote three times – Simmons wanted to rescind her vote, saying she found his approach “unsettling.” Councillor Tim Toomey then tried to pass an amendment undoing Zondervan’s amendment, and though it failed, also asked about filing later to get the vote reconsidered. (Had he done so, it would have delayed passage as effectively as Zondervan’s attempt at using the charter right.)

Zondervan and Sobrinho-Wheeler were not alone in preferring to see Cambridge stand against federal law instead of avoiding a confrontation.

Resident Christopher Schmidt said in a Twitter conversation after the vote that he regretted not sending an email “explicitly to the council saying ‘Please reject this, even though it may induce additional legal risk,’” and he called it frustrating that the conversation was “dominated by process issues, rather than on the merits.”

Emmanuel “Manny” Lusardi, a longtime immigrant activist and former liaison for immigrant affairs to the Cambridge Mayor’s Office, said Zondervan, “an immigrant himself, was absolutely correct about being concerned about what immigration laws may be coming, especially if the Trump administration wins reelection.”

“When did our City Council become afraid of potential legal challenges from the federal government when it comes to protecting our terrified immigrant neighbors. An opportunity to lead the nation was once again lost,” Lusardi said.