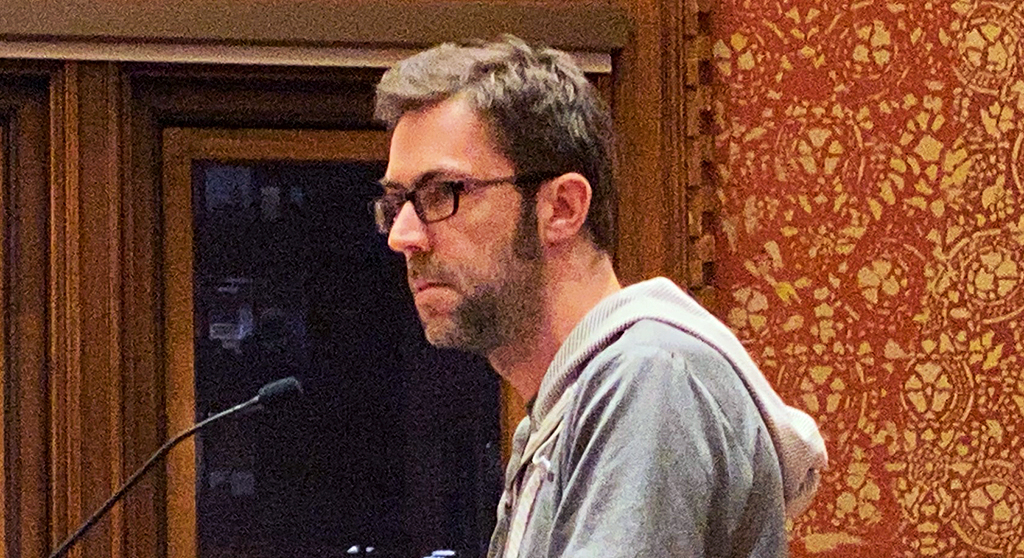 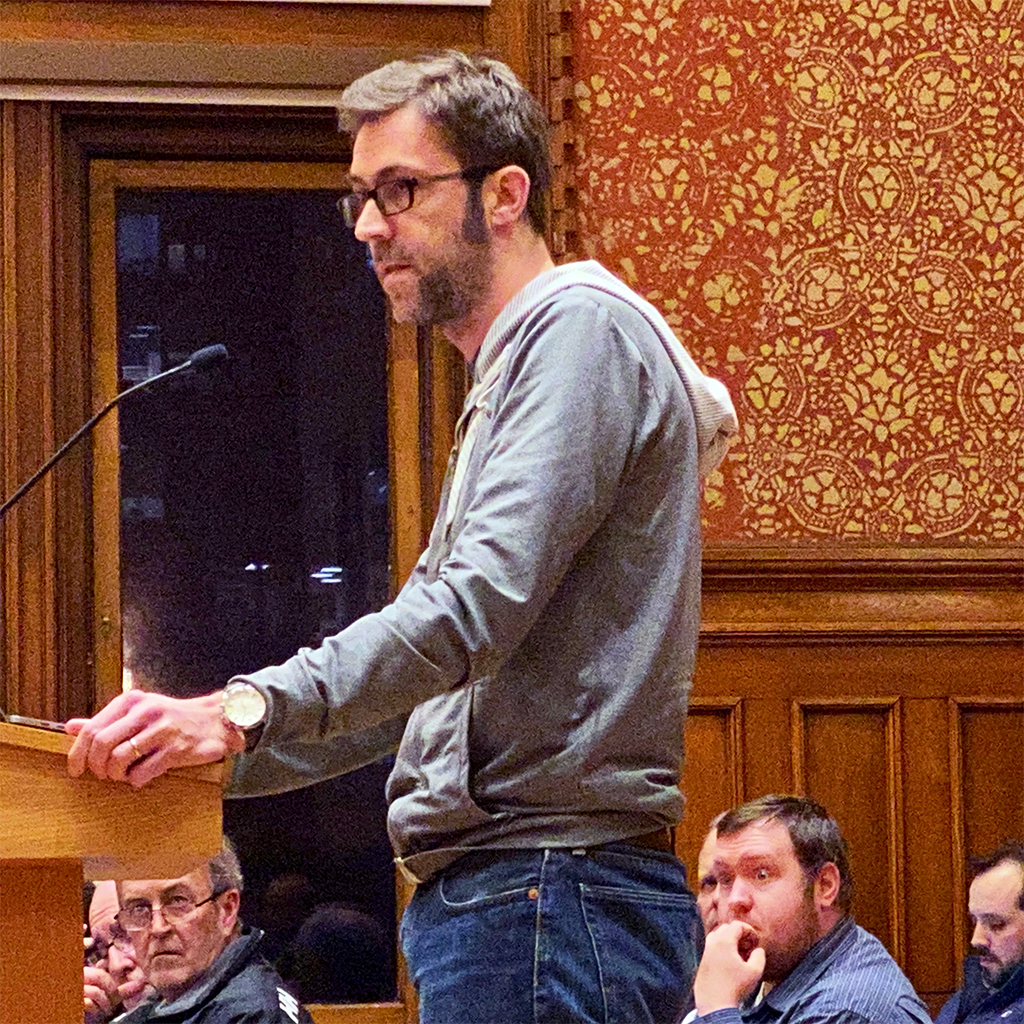 Harvard epidemiologist William Hanage seems to provoke a strong reaction Monday as he describes to the City Council the possible results of a coronavirus outbreak. (Photo: Marc Levy)

While city health officials ramp up plans to deal with the potential spread of the coronavirus, an undisclosed number of Cambridge residents are being monitored by public health nurses as they stay inside their homes for two weeks of self-quarantine. They were asked to isolate themselves after returning from China or other countries with a high level of transmission identified by federal officials.

The Cambridge Health Department has twice promised but did not provide a figure for the number of residents who are in self-quarantine as of Tuesday afternoon, but an unpublicized email Monday from city director of communications Lee Gianetti to the City Council said public health nurses “are currently monitoring a small number of people who have recently traveled to high-risk areas.” At Monday’s City Council meeting, councillors asked for information on the city’s response by March 16; Mayor Sumbul Siddiqui said she would convene a task force on the issue; and councillor Quinton Zondervan planned a Health & Environment committee hearing.

Cambridge Health Alliance spokesman David Cecere said the health care system is asking all patients about “travel history” and is “screening and isolating all high-risk patients.” CHA has “several” isolation rooms in Cambridge Hospital and in Everett Hospital where patients who are severely ill from the virus can be treated, Cecere said.

A second Massachusetts resident was reported infected late Monday, a woman from Norfolk County in her 20s; she is recovering at home, the state health department said. The first person, a college student from Boston, was found to be infected on Feb. 1 and is also recovering, the department said. Gov. Charlie Baker said earlier Monday that the risk in the state remains low. But some infectious disease specialists and public health officials have questioned initial restrictions on testing imposed by the Centers for Disease Control and Prevention, saying the lack of tests could have hidden local transmission of the coronavirus that is now becoming evident in Western states.

A sobering – if not chilling – assessment of the situation locally was given to the council Monday by William Hanage, an associate professor of epidemiology at Harvard’s T.H. Chan School of Public Health, fresh from advising a medical center in Tel Aviv, Israel, on its own isolation center.

“This city should expect substantial disruption for a potentially long period of time during the most intense period of transmission. Planning for this has to happen now, including support for the most vulnerable in our community. You need to get ahead of the virus,” Hanage said, noting that the disease spreads before people know they are infected. “Multiple studies have shown that in the great influenza pandemic of 1918, which killed around 50 million people worldwide, communities that prohibited large gatherings of people early on suffered a lower overall mortality.”

That could mean measures such as the suspension of large-scale gatherings and the closing of schools and workplaces, he said.

In the case of a pandemic without effective controls to limit transmission, it’s expected that around 40 percent to 70 percent of the world’s population would become infected, “with optimistic estimates of the mortality rate, that would translate into dozens of deaths in Cambridge alone, with many more severely ill and hospitalized,” Hanage said. “We have a very narrow window to prepare, hopefully as as much as months, but maybe as little as weeks. And you should act accordingly.”

Councillor Patty Nolan said she hoped Hanage would advise the city further by serving on the mayor’s task force.

Testing for the virus

The state Department of Public Health laboratory received approval to test for Covid-19, the official name of the virus, only on Friday. That is expected to speed up testing, with results available in 24 hours. Originally only the CDC could perform tests, resulting in longer waits. The state agency said it has tested three people since Friday, while nine were tested over the weeks since January.

It’s believed that most people won’t get very sick from the virus, but responding to an outbreak could disrupt life significantly. Schools could close, hospitals might be overwhelmed by demand and employers might send workers home, for example. The shutdown of manufacturing in China has affected the world economy.

As of Monday evening, there were 90,937 confirmed cases of Covid-19 worldwide, the vast majority in mainland China, according to the Johns Hopkins University Center for Systems Science and Engineering, which has been tracking the spread of the virus and has created a map showing it. Other countries listed by the CDC with a high level of risk were Italy, Iran and South Korea. The United States had 105 cases, with six deaths. 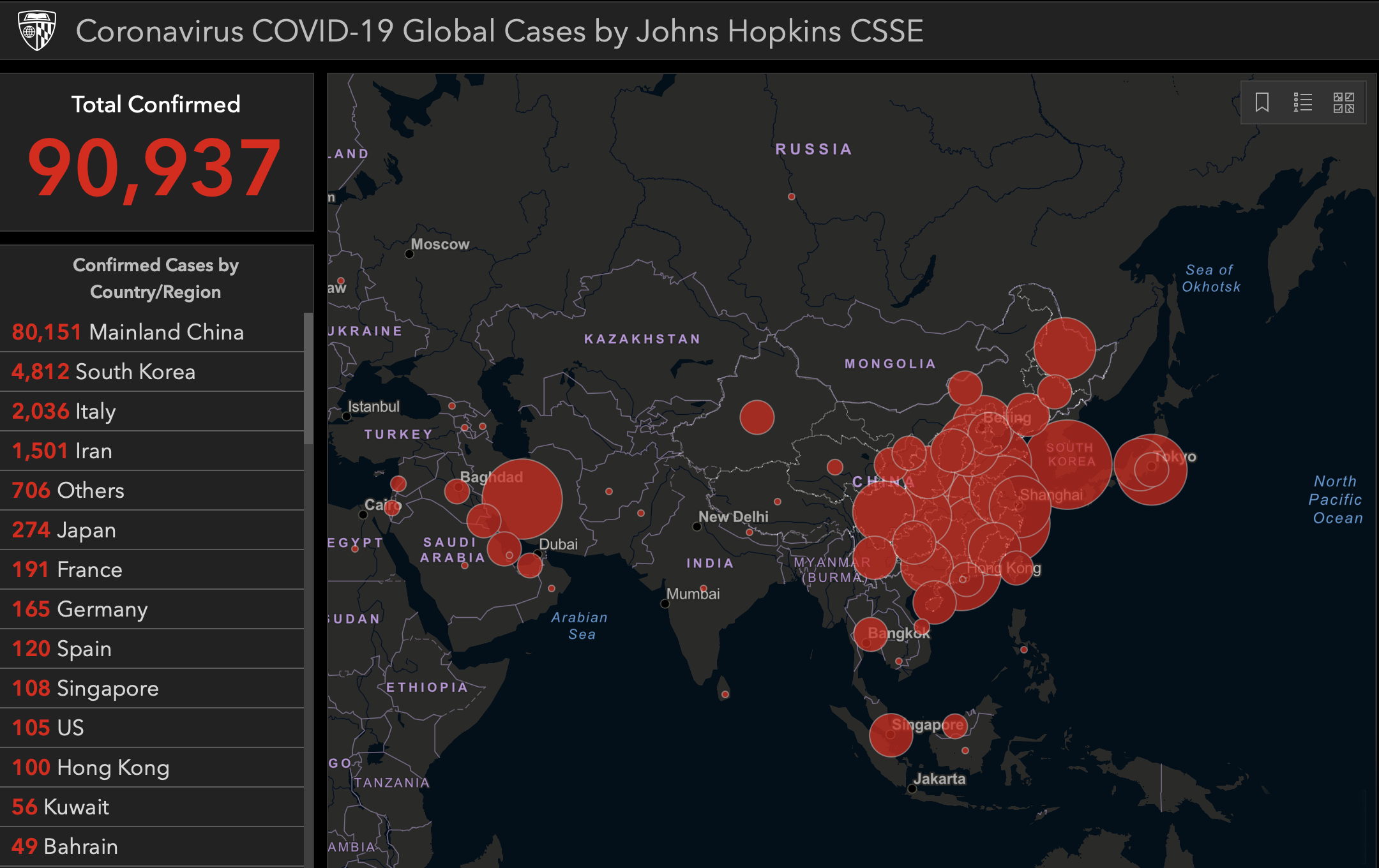 Johns Hopkins University has a map showing confirmed cases of coronavirus and the resulting deaths, as well as recoveries. Click on the image to visit the site.

In Cambridge, Harvard, the Massachusetts Institute of Technology and the biotech industry have international ties. Harvard is asking students or others who have returned from China since Feb. 3, South Korea since Feb. 24 and Iran or Italy since Feb. 28 to “self-isolate” until they hear from the university’s health service, according to Harvard’s website. Travelers must also fill out a form asking when they were in the foreign country, when they returned and whether they have fever or other COVID-19 symptoms, according to a Harvard official with knowledge of the form who didn’t want to be quoted. Harvard health service workers are using the forms to evaluate the traveler’s medical needs, the official said.

At MIT, those returning from the same four countries must provide information about their travel and symptoms and may be asked to “self-isolate,” its Medical department says online. As of Thursday the university emergency management service said no one was known to be quarantining themselves. Harvard declined to say whether anyone was in self-quarantine.

Both universities are restricting travel or advising students and others not to go to China, South Korea, Italy and Iran. “With the spring break season just ahead, MIT is discouraging students, faculty and staff from personal travel to heavily affected countries and will continue updating the MIT community as the situation evolves,” spokeswoman Sarah McDonnell said.

Symptoms of the virus include fever, cough and shortness of breath. Experts believe most people experience no more than a mild illness, but some suffer severe pneumonia and other lung damage. Older people with other disease such as heart problems and diabetes are most at risk.

The state health department has published advisories for nursing homes, schools, hospitals, employers and doctors about how to prevent the virus from infecting people and spreading. There is even a recommendation from the CDC for polling places in the Tuesday election primary: Workers should clean and disinfect voting machines and electronic equipment, provide a hand sanitizer to voters and wash their own hands often. Communities should also make sure there is a bathroom with adequate hand-washing capability at the voting place, the agency says.