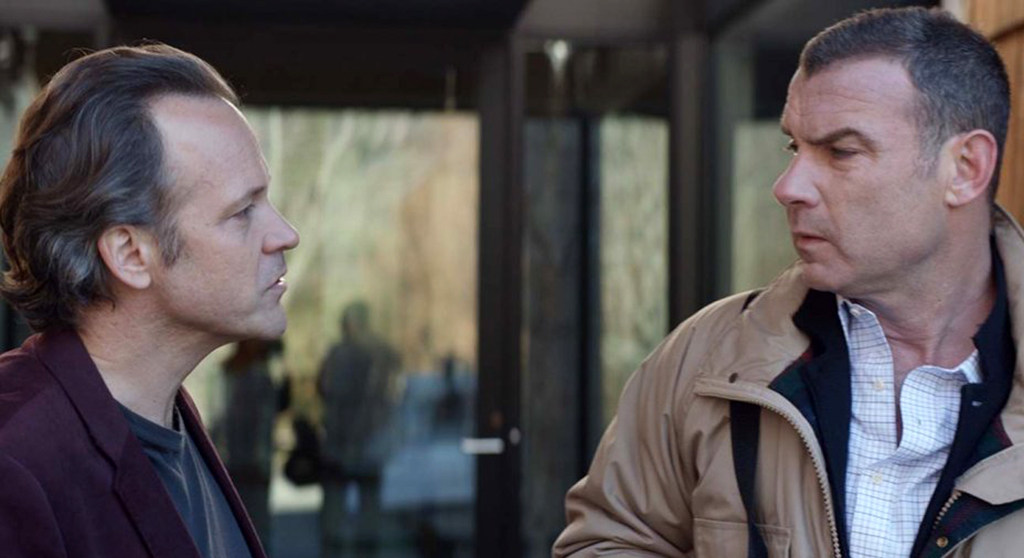 The setting is a quiet upstate New York hamlet where Drew (Liev Schreiber), a middling real estate agent, drops by the manse of a hedge fund honcho by the name of Quint Manning (Peter Sarsgaard) to pick up his daughter Shannon (Maya Hawke, of “Stranger Things”), who’s dating Quint’s son, Jamie (Fred Hechinger). Quint, none too social, is in the throes of an intense doubles tennis match and irate about losing to his employees. On a whim, Quint flushes his partner and inserts Drew, an aw-shucks kind of guy who doesn’t let on that he played competitively in college. The match immediately becomes a non-contest and, as a show of his appreciation, Quint invites Drew to buy shares in his hedge fund at the reduced “family and friends” rate of $300,000 per share – nothing for even the well off to sneeze at. Drew, as we learn, is hoping for more kids with his second wife Ronnie (Betty Gabriel) and a bit tight on finances, but nonetheless jumps at the opportunity despite the high-wire entry point.

It’s clearly a bad idea, made worse when Drew takes out a loan by fudging his credentials. As if on cue, the fund takes a massive dive. Drew returns to the manse wanting his cash back, but Quint not only denies him, he shuts him out and even threatens legal repercussions. Meanwhile Ronnie’s expecting twins, Jamie develops a major drinking problem and Shannon takes up with Ian (Alex Wolff of “Hereditary”), a reclusive bad boy with a dark past. Don’t forget the opening scene, in which a young man on a bike gets blown off the road by a surging SUV, which comes back to haunt late in the game.

Yup, there’s a lot going on in “Human Capital,” but the script by Oren Moverman keeps it all grimly juggling and spinning – even if you’re given pause at how, in such a small burg, titans of industry (struggling or not) such as Quint and Drew are not acquainted, and why Drew, not being a gambler by nature, would buy in given all the upfront red flags and hurdles. The true power to Marc Meyers’ serpent-in-suburbia drama is Sarsgaard (“Shattered Glass,” “An Education”) who’s always played slippery eels with complexity and nuance. It’s hard to tell here, though, if his Quint is setting Drew up as a mark or if the timing of the deal just happens to be bad. It doesn’t much matter; Quint’s response plays like the former, as the well-heeled stockbroker moves Drew around his plate like a sprig of superfluous parsley constantly in the way. On par with Sarsgaard is Marisa Tomei, who’s not on screen nearly enough as his wife. The two are like hissing cobras dancing with each other as they look to strike, and they’re even less cordial to those who have the misfortune of getting in their way. Hawke too, as Shannon, carries a certain amount of venom that, like the other two, gets directed at Drew, a man whose fate feels predetermined from the first scene.