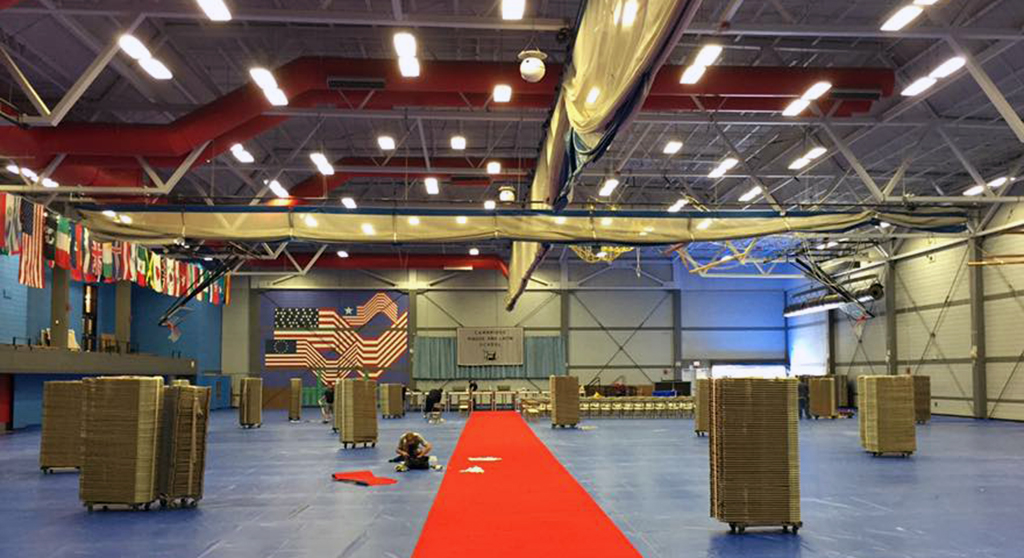 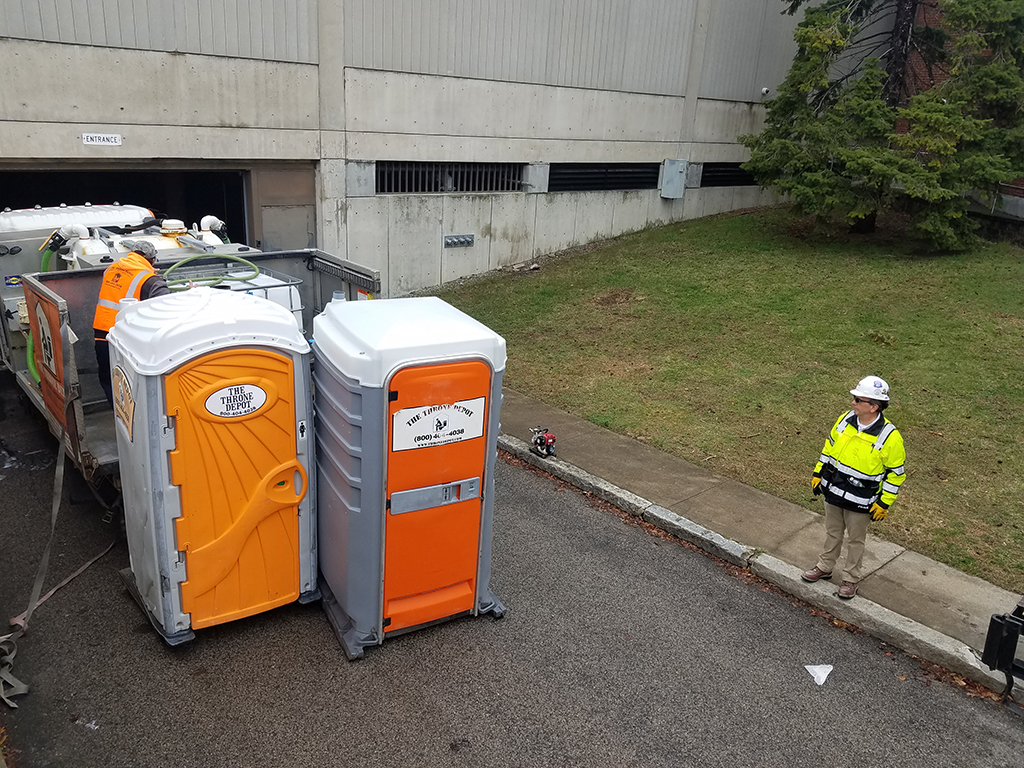 Portable toilets are delivered Monday to the city’s War Memorial Recreation Center in Mid-Cambridge, which is being turned into a homeless shelter in light of growing coronavirus infections.

The city’s War Memorial Recreation Center will be “up and running” as a homeless shelter by Monday to protect a vulnerable population from getting and spreading coronavirus infections, City Manager Louis A. DePasquale said Monday.

In addition to serving the public, the center and its field house are also facilities for the Cambridge Rindge and Latin School, and city councillors hearing the plans Monday wondered what would happen if high schoolers were able to return to campus before the end of the academic year.

But school is not expected to return from remote learning. “It’s hard to predict, but based on the numbers we’re seeing, I would be stunned if school is open for the month of May,” DePasquale said. 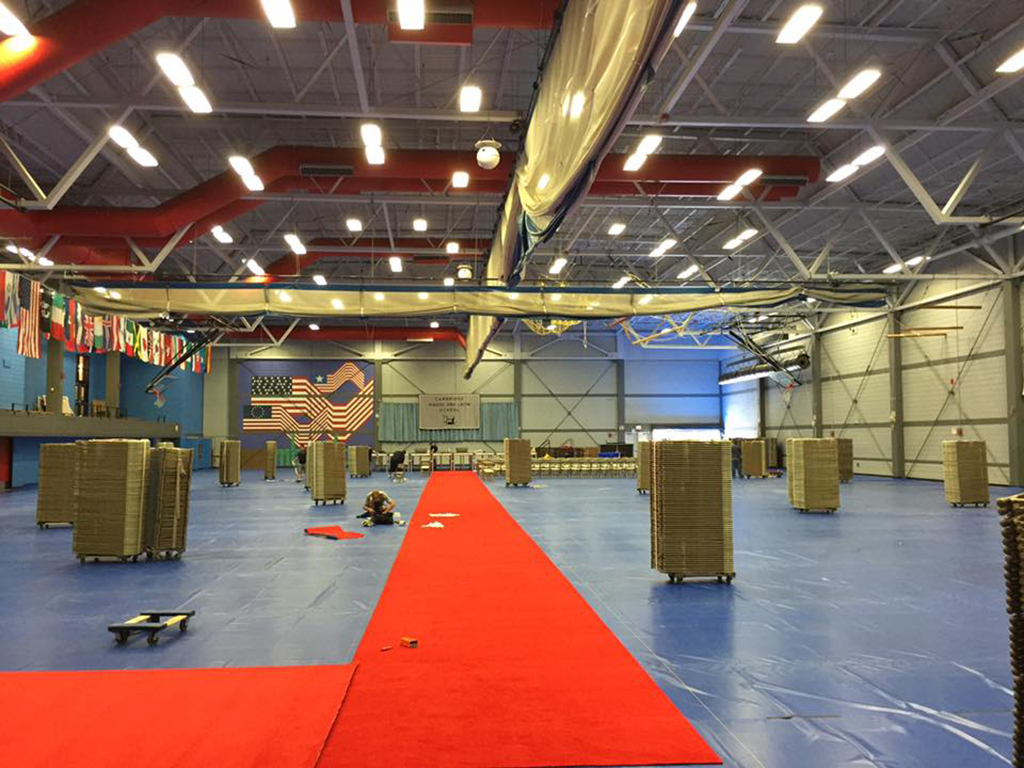 The arts building that connects the War Memorial Recreation Center and main high school will remain locked and empty during its use as a shelter, he said. If the coronavirus crisis does ease enough to allow students to return, Harvard and the Massachusetts Institute of Technology have agreed to provide classrooms to make up for lost space.

The news was discussed on social media and in newsletters sent out by councillors over the weekend. An email explaining the decision was sent out Monday afternoon by a police spokesman, as police commissioner Branville G. Bard Jr. led a task force to find a shelter space with deputy city manager Lisa Peterson.

But even though workers have been onsite for several says clearing out chairs and gym equipment and building partitions inside for a quarantine unit, residents of the surrounding Mid-Cambridge neighborhood were not advised, and members of the School Committee had not been consulted.

“The School Committee shouldn’t hear about this good work that we’re doing through the Internet. They are equal partners in policymaking,” councillor E. Denise Simmons said.

DePasquale apologized, saying “this has been a quick-moving item,” and promising an extensive letter to parents Tuesday, following up on some communication from the school district Monday explaining the creation of the shelter. A nine-member task force making the decision, which also included six de facto members from state Rep. Marjorie Decker to the mayor and councillor Marc McGovern, a social worker, began discussions just March 23.

An email chain among Mid-Cambridge neighbors shows general shock over what one resident realized was a “fait accompli” as construction vehicles, police cars and a trailer with dozens of portable toilets arrived Monday, with workers racing to put the site together without regard for the social distancing meant to avoid spreading the Covid-19 virus. Fritz Donovan, president of the Mid-Cambridge Neighborhood Association, is described as being taken by surprise. One resident said the work didn’t raise alarms until the toilets arrived, and before that “we had no idea what was going on.”

Deciding on the War Memorial

“Our goal was to identify a temporary emergency shelter that would not take too long to prepare and would satisfy the criteria laid out by our health care team,” DePasquale said. The conclusion was “that the War Memorial Recreation Center is the only site ready and available to serve the emerging needs of this population.”

The task force identified around 20 possible locations including city-owned facilities and hotels left vacant by the crisis, Bard said. The list was cut “immediately” to five that got site visits, Bard said. The recreation center is the best option because it is empty, is already designated as a Red Cross site for emergency preparedness used in the past for mass flu clinics, sheltering and emergency drills, and can be easily separated into three distinct areas with a “minimal amount of construction” that can later be undone with ease.

It was explained why Harvard and MIT could not host the homeless in empty dorm rooms, as Suffolk University is doing in Boston; councillor Quinton Zondervan’s question about this drew a response that the universities would provide rooms for first responders.

The city’s warming center for the homeless is meant to sunset April 15, with activities that would take place there being folded into the temporary War Memorial shelter for the duration, Jacob said. The Y2Y Shelter in Harvard Square, which serves homeless youth and is usually student-run, was approved Monday for a $52,890 appropriation from the city to stay open until the same date with a professional staff, since Harvard sent students away when coronavirus struck. But mingling homeless youth with homeless adults in the War Memorial afterward may not be suitable, vice mayor Alanna Mallon said. (The temporary War Memorial shelter is also not intended for families, officials said.)

If the First Parish Unitarian Universalist Church that hosts Y2Y agrees, “the city is certainly willing to continue the funding beyond April 15,” said Ellen Semonoff, assistant city manager for human services. “Any shelter that’s currently operating and doing well is not a shelter that we would be trying to close or move.”

An appropriation request is expected next week to allow First Church, also in Harvard Square, to keep its shelter open during the day, Semonoff said.

How the center will run

The temporary shelter, run by Bay Cove Human Services, will also be programmed to keep the homeless indoors during the day, different from the usual model of providing a bed for people between the hours of 7 p.m. and 7 a.m. Staffing and budgeting are not set, officials said, but the center will have 22 beds in a lower-level quarantine area where people will be tested for the virus over two or three days; another 25 to 50 people can be housed in a second-story isolation unit, meant to hold people who test positive for the virus but are not sick; and 50 to 100 beds in the field house will be used as an overflow and annex to Bay Cove’s 240 Albany St. shelter. All people in the field house will have tested negative for the coronavirus.

The sick, of course, will be taken to a hospital for treatment. Private security will work inside the shelter, and police will provide more security outside.

The city has an estimated 81 unsheltered homeless, on top of 326 who have been served by shelters.

This post was updated March 31, 2020, to correct that councillor Quinton Zondervan asked about using dorm rooms for homeless people.