‘Roar’: Grand fiasco of a film streams this week from the vaults of locked-down Brattle Theatre 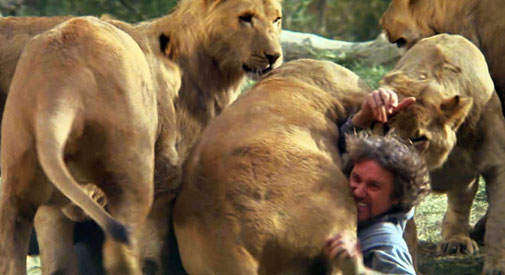 ‘Roar’: Grand fiasco of a film streams this week from the vaults of locked-down Brattle Theatre

It took more than a decade, $17 million and many near-fatal incidents with cast, crew and big cats to get this cinematic obsession to screen.
By Tom Meek

With the Covid-19 lockdown, movie theaters have been shuttered, but local chains and arthouses such as the Brattle and Somerville theaters have launched virtual screenings that let you rent a movie to watch at home, with a portion of the proceeds going to benefit the sponsoring theater. On Wednesday night, the Brattle hosts a screening of “Roar” (1981) a 10-years-in-the-making eco-minded endeavor that may just prove wilder than the streaming rubberneck spectacle du jour, Netflix’s “Tiger King.” The film ran theatrically for the first time in Boston back in 2015. Below is Cambridge Day’s review from then.

The most amazing thing when you see “Roar” is just how unprotected and close the cast (pretty much Marshall, Hedren, Griffith and Marshall’s two sons, John and Jerry) get to the lions. There are scenes in which Marshall is teamed by a pack of lionesses as if he’s prey, and Griffith and her mom are chased through a jungle house by a large, blood-soaked male lion who seems intent on tasting their innards. What transpires makes Siegfried and Roy seem like child’s play, and the film – shot by skilled cinematographer Jan de Bont, who would go on to make “Speed” and “Twister” – is a wonderment in quality of composition and precise framing, especially considering the inherent danger and mercurial nature of the feline cast.

Plot wise there’s not much to “Roar.” Marshall was inspired by an abandoned farm bungalow in Africa inhabited by a pride of lions, and back in (north of) L.A., recreates that cross-pollination on a small plot of lake land crowded by trees. As the story has it, his character’s fictional family is coming for a visit, but he’s off dealing with locals and two rogue tigers who ultimately require a jeep ride. Back at the ranch, Hedren, Griffith and the boys spend their time penned in by the big cats who either want to eat or greet their new guests. It’s somewhat of a suspense thriller with a touch of “Bringing Up Baby” comedy mixed in, and while it never works as a story, every frame engrosses from a “What’s going on?” and “How did they shoot this?” aspect.