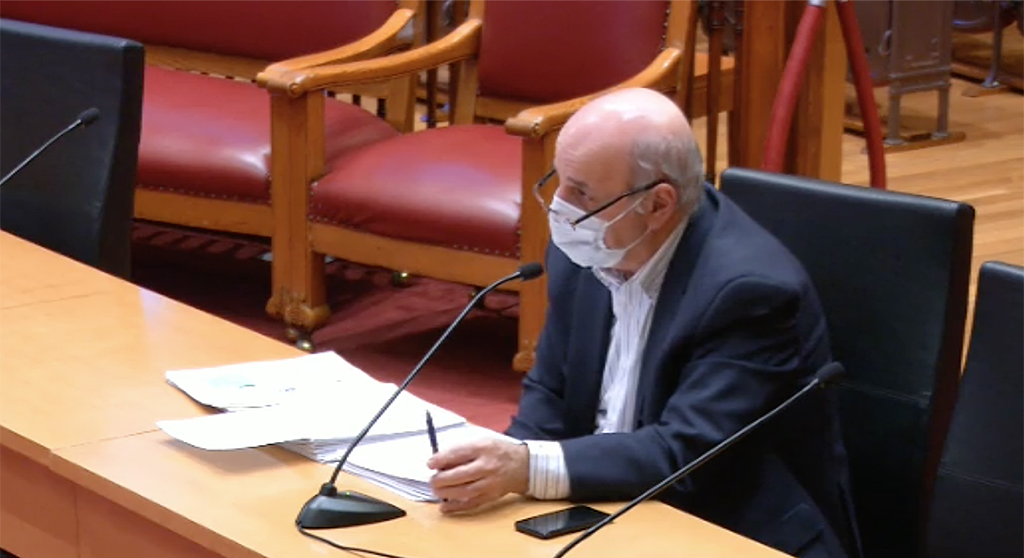 City Manager Louis A. DePasquale sports a mask Tuesday at a special meeting of the City Council about responding to a coronavirus outbreak.

Efforts to enforce mask-wearing, isolation and social distancing are picking up even as Cambridge health officials talked Tuesday about a “glimmer of hope” that the city was seeing its peak in the current wave of coronavirus infections.

Starting Wednesday in neighborhoods known for social distancing violations, there will be multilingual calls blared from Department of Public Works sound trucks – usually tasked with calling out warnings to move cars during street cleaning to avoid towing and tickets – to remind residents about wearing masks and other ways to limit infection. City councillors were told of the plan by City Manager Louis A. DePasquale. The special meeting was held because there was no meeting Monday, when the state observed Patriots Day.

An order calling for a study of the mandatory wearing of masks outside and in stores is ready to go for next week’s council meeting, after being delayed by mixed messages from the state Attorney General’s Office, councillor Marc McGovern said.

At first, cities and towns were told they could not mandate that residents wear masks. McGovern said he has been in contact with the state and learned the “position has changed” in a public health emergency. It has not been put in writing, but was confirmed to him verbally, he said.

The order is for study of mandatory mask wearing by city staff rather than a simple call for implementation because “it is, like everything else, more complicated: How do you enforce it?” McGovern asked.

There have been widespread concerns, including among councillors, about large numbers of people not wearing masks, often when running or bicycling. But McGovern said it was unknown how the city would do the proper amount of outreach, what was supposed to happen if police got calls for hundreds of people ignoring a mandate – “What do they do with that information? Chase the person down? What happens when they find them? Is there a ticket?” – and whether the city would first take steps to ensure everyone had a mask to wear.

Meanwhile, city health officials were feeling “cautiously optimistic” that Cambridge was at the peak of the coronavirus’ first wave of infection, and that cases could ease off in the coming weeks. The assessment came from Cambridge Health Alliance infectious disease specialist Lou Ann Bruno-Murtha who, like most people speaking at the Tuesday meeting, was calling in remotely.

“We’re starting to feel that way. I think in the state there’s been at least three days now that the total number of cases have gone down. Of course, there’s still a lot of patients in the hospital and we’re still realizing too many deaths, but I think we’re starting to see a glimmer of hope,” Bruno-Murtha said. By Cambridge Public Health Department estimates, the city has “been in our surge for two weeks now … I think it’s clear that we hit our surge the week before Boston did.”

During the meeting, official figures were released putting cases of infection in Cambridge at 608 residents testing positive for the coronavirus since the outbreak began, and 28 confirmed as dying from it. But 60 had recovered. Bruno-Murtha said nearly 450 people have been hospitalized for coronavirus in Cambridge, with 81 of them put on ventilators, but the total of the day was 106 patients hospitalized and 14 on ventilators.

“Our numbers are actually looking better. We are doing a much better job at keeping patients out of the intensive care unit or surge critical care units,” she said. Hospitals are nearly at capacity in areas serving less critically ill patients but have “ample capacity” in critical-care areas, she said. (The state is reporting there were 107 patients being treated for Covid-19 infections at the Cambridge Health Alliance and 21 in the intensive care unit as of Tuesday, a figure that has been rising in the past few days. Though previous days have been removed from the state website, on Monday those figures were 101 and 20, respectively.)

There might be no need to ration ventilators, and even concerns about a shortage of personal protective equipment such as masks and gowns for doctors and nurses had been answered with donations and sterilization, Bruno-Murtha said. Partners HealthCare, an Ohio company called Battelle and the City of Somerville installed a machine in Assembly Square that can sterilize 80,000 masks a day for reuse; in Cambridge, the biotech company Novartis has loaned the city vaporous hydrogen peroxide machines for sterilizations of some gear, while protective suits are being cleaned by city health staff continually with a diluted bleach solution.

There were also warnings of why the news was not as good as it might seem initially – including that the test figures were still growing as new populations were tested, starting with residents of nursing homes and assisted living centers and among homeless people visiting shelters. Also, good outcomes relied on continued or even increased caution on the part of residents. More than 600 inquiries to public health nurses in the past days revealed “ongoing concern around the lack of compliance with social distancing, or wearing masks [at] supermarkets,” said Claude Jacob, the city’s chief public health officer.

“It’s not just that we’re looking at a peak or an apex in terms of the metaphor of a mountain. Think about a mountain range,” Jacob told councillors. “There are peaks and valleys, and I would just remind us all that there are still unknowns. We’re thinking about one peak, and then a downward trend. But there may be peaks and valleys across time. So we’ll see what next week brings, and we’ll see what the following week brings.”

As one of the few participants actually present in Sullivan Chamber during the special meeting, the city manager was conspicuous in modeling proper mask-wearing. He and Jacob had been criticized after being seen in a video that had been sent citywide to explain preparation of a temporary shelter for the homeless in Mid-Cambridge. In the video, DePasquale and Jacob – as well as several construction workers – were all seen working or just standing closely together and talking while not wearing masks.