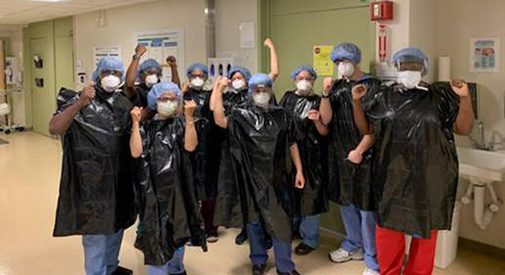 Jillian Brelsford is working five consecutive 12-hour shifts this week as a nurse at CHA Cambridge Hospital, caring for Covid-19 patients on one of the hospital’s dedicated coronavirus units. She has an N95 mask, though it may not always fit her. She has a gown, though she and her colleagues have set aside a stash of garbage bags as backup if the hospital runs short of gowns again. She’s worried that Cambridge Health Alliance might soon run out of certain medical devices needed for treatment, or space in certain hospital rooms that ensure safety when patients need high-risk respiratory procedures.

Brelsford doesn’t fault CHA’s effort to find supplies and its dedication to its mostly low-income patients and its workers in the face of a pandemic. “I absolutely love Cambridge Health Alliance … I think we’re unique in the commonwealth,” she said at the end of a recent shift. “I knew I wanted to be a public sector nurse and take care of our patients facing health disparities.”

“If we had had the resources to do it, it’s very likely that we would have prepared for a pandemic,” she said. Instead, the Alliance, like other health care organizations in greater Boston, is struggling to meet the need for equipment and supplies.

Alliance officials aren’t giving details of the shortages except on rare occasions, such as chief executive Assaad Sayah’s disclosure at a March 18 press conference opening a drive-in testing tent in Somerville that the previous week the Alliance had three days of personal protective equipment on hand.

Cecere disclosed for the first time that as of Friday, 61 employees have tested positive for the coronavirus. Cambridge Day initially asked for the number of infected staff March 23, and sought the number of those in self-quarantine.

Getting the facts out

The silence from Cambridge and other health care systems concerns Brelsford as well as the Massachusetts Nurses Association, where she is a board member. “There’s no social utility in not speaking plainly about the facts,” Brelsford said.

After being informed that Cambridge Day had interviewed a staff nurse who had described shortages, spokesman David Cecere confirmed that the Alliance was short on pulse oximetry monitors and was reusing N95 masks. The monitors measure the oxygen levels in patients’ blood remotely to let nurses know if they need oxygen; the less sophisticated version that people can use at home is selling out in many areas. CHA recently got fewer hospital-grade wireless monitors than it had ordered, Cecere said.

“The pandemic has had a tremendous impact on the health care supply chain,” he said. CHA is working with more than 200 vendors and “other partners” to find equipment, Cecere said.

Cecere said the Alliance has expanded its supply of negative-pressure rooms, which can contain infectious aerosols during certain procedures; Brelsfrord said she worried that there are only four of the specialized rooms on her floor.

As for masks, Brelsford said “everyone on our floor has access to N95 masks,” which is better than the state standard. But “even [in] organizations like ours that are making tremendous effort and doing the right thing by instituting N95 mask policies for workers caring for Covid-19 patients, we are still risking exposure because masks that fit us are not always available.”

“I have worked several shifts with size regular masks, and I am a size small,” she said.

Cecere said the Alliance “is working very hard to outfit our staff with the needed PPE in spite of the challenges presented by this crisis,” and he added that federal and state officials have suspended rules that required proof of annual fit tests for the masks.

Late last month, CHA set a policy to conserve hospital gowns, mandating one gown per room that would be used by multiple workers who went in and out to tend to a patient, Brelsford said. That alarmed nurses because “if one person removes the gown and contaminates it,” others could be infected, she said. “Frontline workers felt very unsafe.”

One nurse procured garbage bags and nurses cut openings allowing them to wear the bags. “We were truly desperate, and we were not adequately protected,” Brelsford said.

A photograph of the garbage-bag-gowned group appeared on Facebook on April 1, about a week after the policy began. “Someone noticed and gowns were mysteriously delivered to our unit,” Brelsford said. Now there’s an adequate supply of hospital gowns made of Tyvek, the plastic building covering, she said.

The garbage bags “are still in our break room and they are labeled ‘backup gowns,’” Brelsford said.

“I really think that photo implicates the state of Massachusetts and the federal government in their lack of timely resolve to intervene in the supply crisis,” she said.

The Massachusetts Nurses Association has sent five letters to Gov. Charlie Baker calling for a unified state policy on protective equipment and layoffs, rules allowing frontline workers to supply their own N95 masks and other equipment and mandating use of the masks for all employees seeing Covid-19 patients; some hospitals – not the Alliance – restrict masks to nurses performing high-risk procedures such as providing a nebulizer or doing chest compressions, Brelsford said.

Although the state found and bought 1 million N95 masks with the help of Patriots owner Robert Kraft, its guidelines say they will go only to organizations that can demonstrate a “critically low supply” of PPE.

State Health and Human Services Secretary Mary Lou Sudders said on April 2 that the state will disclose the names of facilities that get masks from the stash. “We will post who gets what when we get it,” she said at a press conference. Yet a spokesman declined on Thursday to say whether the Alliance, Mount Auburn Hospital or Cambridge nursing homes had received supplies.

Cecere also did not answer a question about whether the Alliance had requested or received a delivery from the state.

Brelsford said “the goal should be masking for all workers” seeing any patients, since some people can have Covid-19 without symptoms and may spread it. “By cobbling together insufficient policies we are not addressing the problem,” she said. “It can be achieved if facilities exercise honesty about what they’re up against.”

“As a public organization, CHA actually has an opportunity for organizational leadership,” she said. “It’s very much in line with our values to speak plainly about our collective situation.”