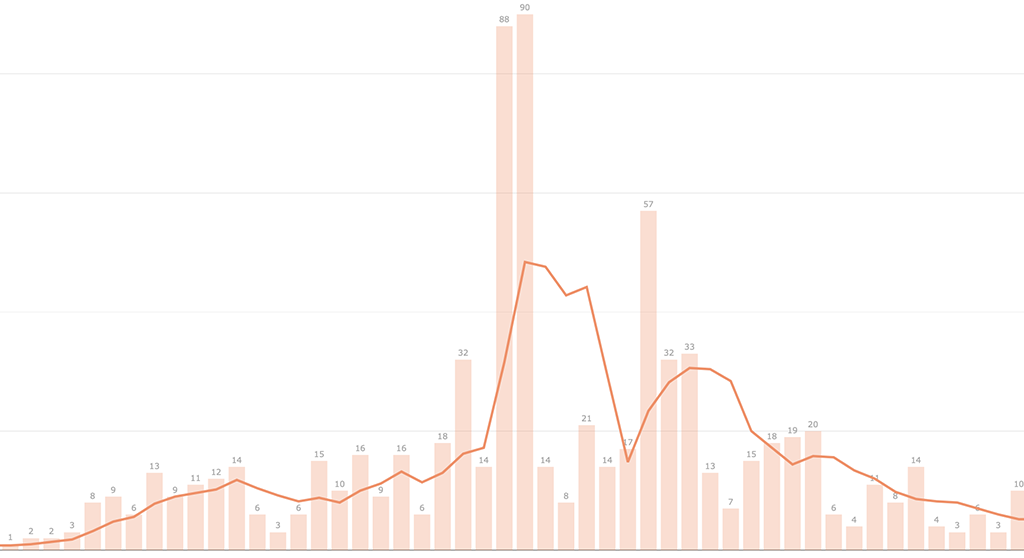 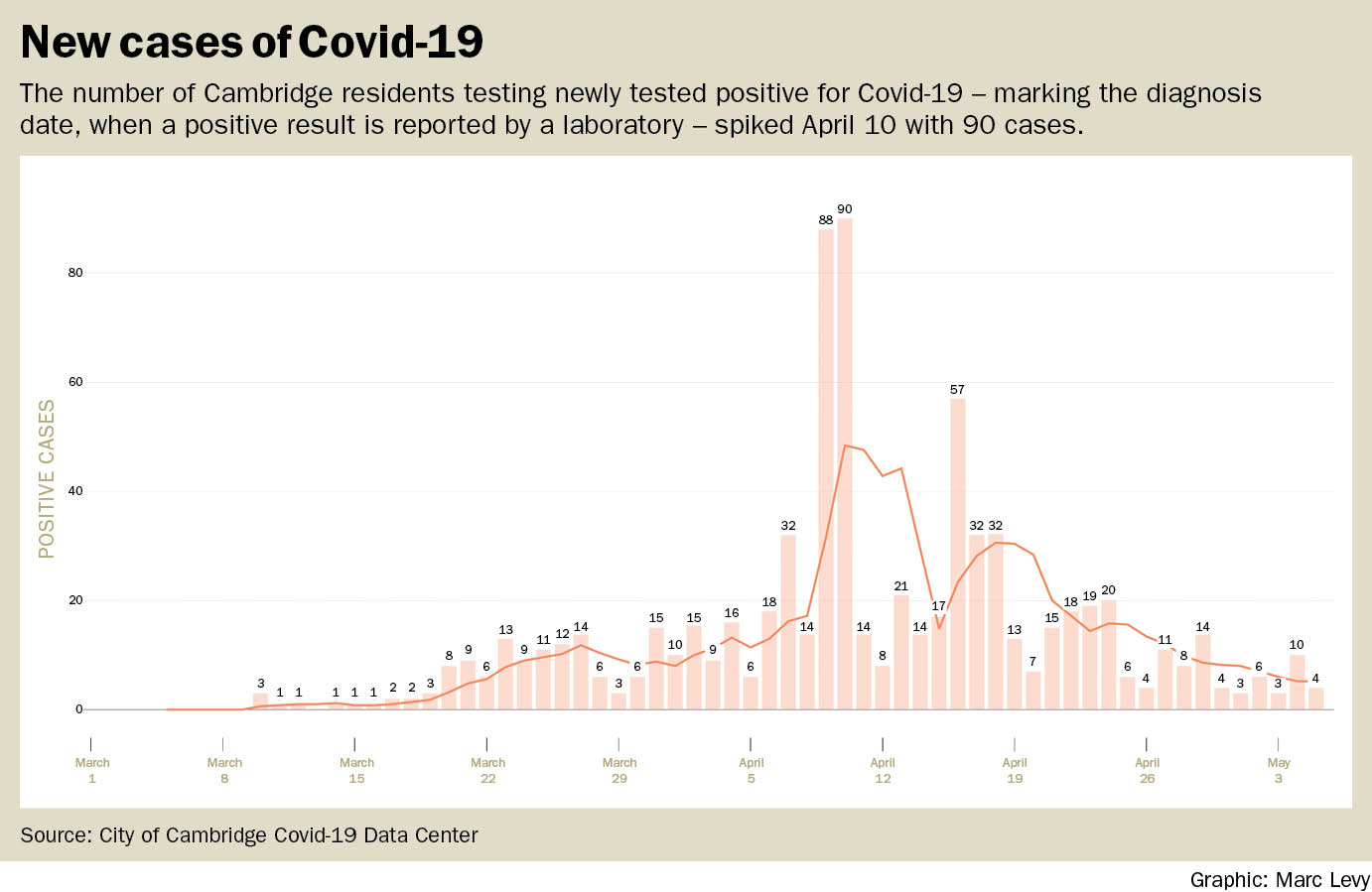 Two measures of the impact of the Covid-19 pandemic in Cambridge show a hopeful trend, though health officials are not expressing an opinion.

The five-day average number of newly diagnosed cases of the virus has been declining since April 19, according to daily reports from the Cambridge Public Health Department. The actual new case count has varied; data experts recommend averaging the number of new infections over five days to smooth spikes that could skew the data, the health department says.

Health department spokeswoman Susan Feinberg didn’t immediately respond to a request for comment on the figures.

The other encouraging trend concerns the Cambridge Health Alliance, which faced a surge in Covid-19 patients last month. The health care system’s bed census for coronavirus patients has dropped from the high 90s and low 100s in the third week of April to 66 on Wednesday, except for a couple of one and two-day blips, according to hospital occupancy figures reported by the state Department of Public Health. The number of patients in intensive care beds has remained high for most of that period, however. Many hospitalized Covid-19 patients remain on ventilators in the ICU for a long time, doctors say.

“We believe we are past the peak,” Alliance spokesman David Cecere said Monday.

It’s been challenging. CHA’s two hospitals in Cambridge and Everett have “fewer beds than the large tertiary hospitals, therefore small changes in our census have a larger impact on occupancy rates,” Cecere said. The health care system also has “hotspots” of infection in its service area and the low-income patients it serves are “disproportionately affected by this virus,” he said. Revere and Everett, two communities the system serves, have among the highest infection rates in the state.

The Alliance has been able to transfer patients to the Beth Israel Lahey Health network if needed and has accepted patients from the network if it can, he said; it’s affiliated with Beth Israel Deaconess Medical Center. CHA also set up an outpatient Covid-19 clinic at its Broadway health center to treat patients with worrisome symptoms and monitor them at home; that’s credited with keeping hundreds of patients out of the hospital. 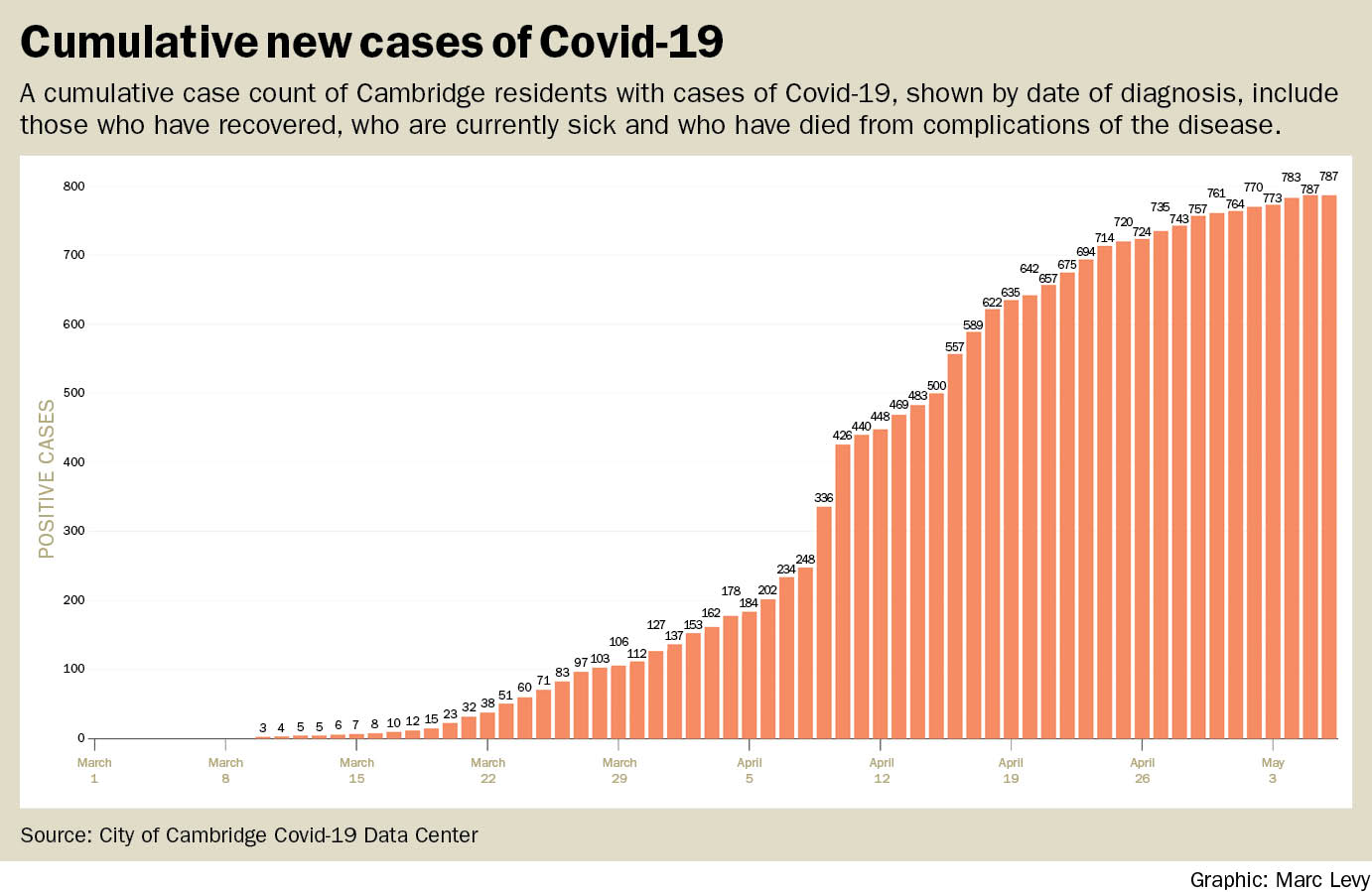 While newly diagnosed cases of the coronavirus have been decreasing, the cumulative number of people with the virus has continued to increase, but slowly. On Wednesday the count reached 789, up 1.6 percent from 776 cases on Tuesday. Deaths rose to 62 from 60.

That pattern could change with more tests. The Alliance is opening a testing center Friday for any Cambridge resident regardless of symptoms. The city has also started a third round of testing of all nursing home and assisted living residents and workers. After the first round last month, the number of cases doubled in two days as 169 long-term care residents and 34 workers tested positive. The health department previously knew of only 24 cases.

The city also plans to offer tests Thursday to homeless people who are living on the street.

Cambridge has an infection rate of 732 cases per 100,000, which ranks the city in the top third of Massachusetts communities, according to the latest report of Covid-19 rates by city and town. The report is updated every Wednesday was posted by the state Department of Public Health on Wednesday.

Many experts expect a  second wave of coronavirus infections in the fall and winter.