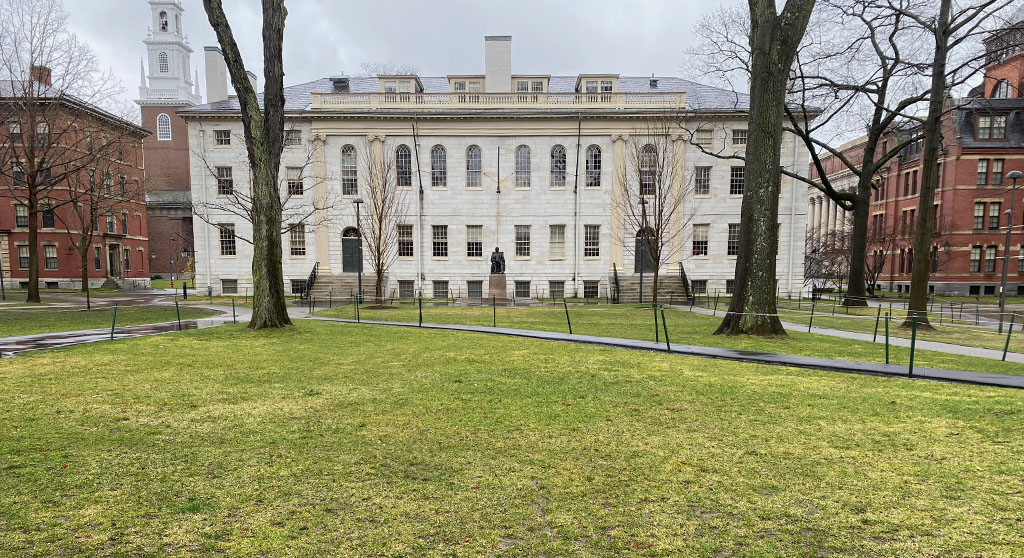 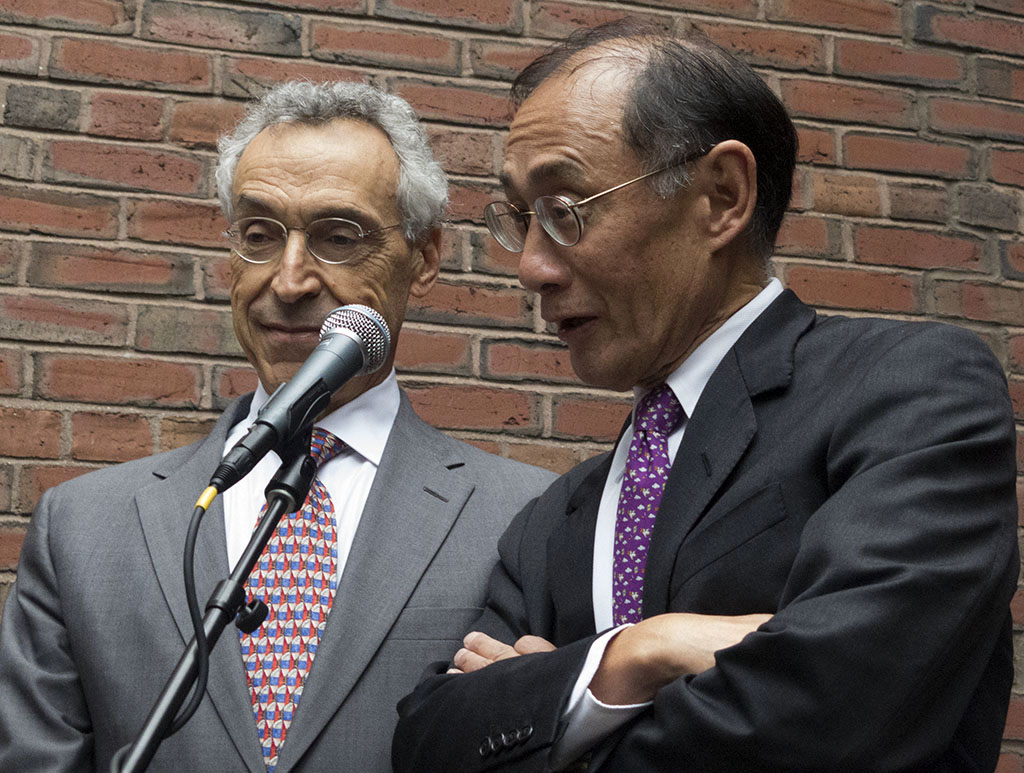 Harvard University and the Massachusetts Institute of Technology are seeking an emergency court order requiring U.S. Immigration and Customs Enforcement to allow international students to remain in the United States, and to stop ICE from implementing a rule it announced Monday that would require those students to leave.

The lawsuit was filed at 7:25 a.m. Wednesday, and the schools asked for an immediate hearing that day. By 11:30 a.m., Judge Allison D. Burroughs had scheduled an initial hearing for Thursday morning.

At the hearing, Burroughs’ primary focus was scheduling. The sole government lawyer asked for one day to get his bearings and consult ICE, as well as the Department of Homeland Security (its parent agency), the Department of Justice and other, unspecified, federal stakeholders.

The court will reconvene at 10 a.m. Friday to determine whether the federal government will agree to defer implementation of the rule to allow a more orderly litigation process, or to set a schedule for a full hearing on the schools’ request next week on an expedited basis.

So far, at least one Harvard student has been refused permission to board a plane, Harvard told Burroughs this morning. A student with a valid F-1 visa was stopped from boarding a flight in Minsk, Belarus, because of the new policy, according to Bill Lee, a high-profile attorney representing Harvard and MIT. Lee said this demonstrates the urgency of the situation, and he expressed discomfort with the one-day delay and waiting until next week to hold the hearing.

A Harvard spokeswoman said she was not aware of other students facing similar difficulties; MIT did not respond to an inquiry about travel obstructions, but said they were “closely monitoring any impacts of the ICE directive” on their students.

Lee is a partner at WilmerHale as well as a member of Harvard’s board of trustees; he successfully represented Harvard before Burroughs in 2018 in a racial discrimination lawsuit – Students for Fair Admissions v. Harvard – that shone a national spotlight on Harvard’s admissions policies. 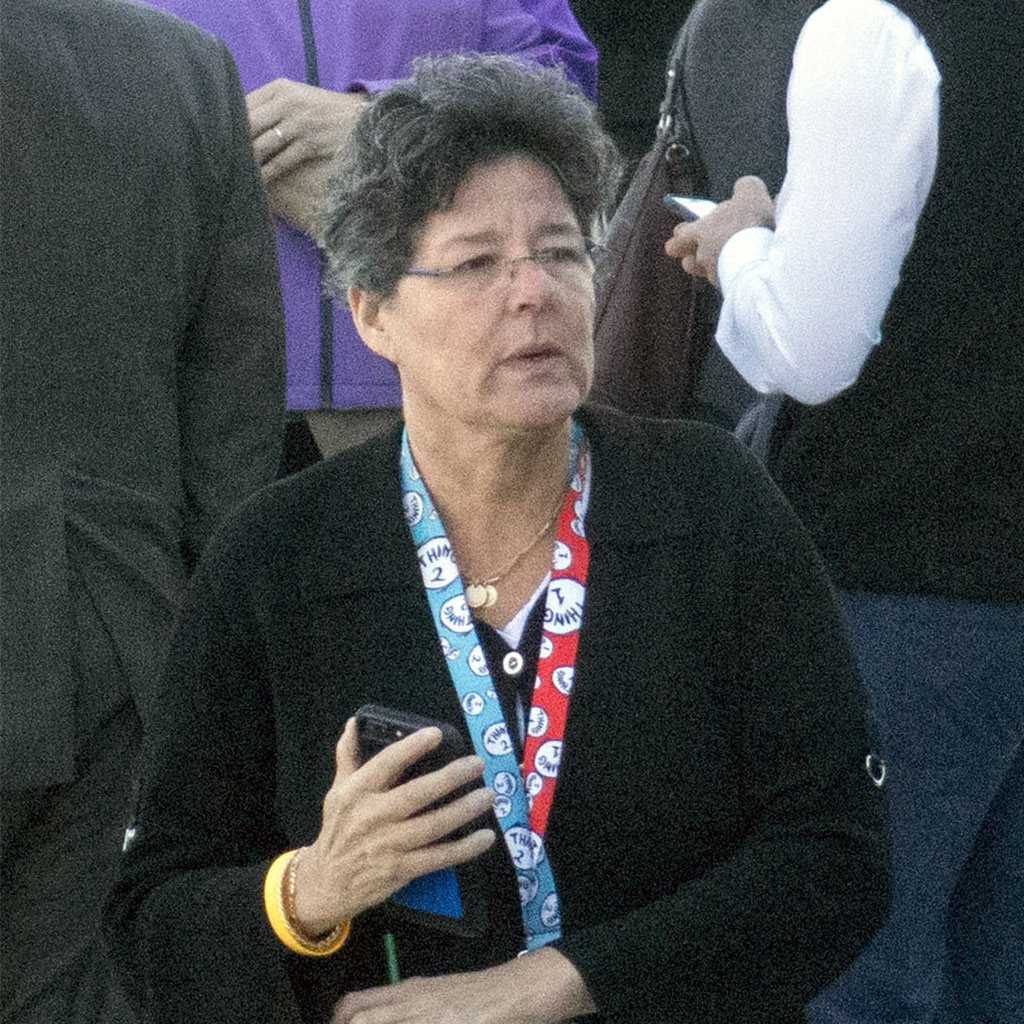 On Monday, ICE threw “virtually all of higher education in the United States into chaos,” the lawsuit said, by announcing that international students holding F-1 visas could not remain in the United States if they were taking a “full online course load.” Students could instead leave the country or, ICE suggested, transfer to another school, something the plaintiffs say is entirely impractical.

This came the same day as Harvard’s announcement that its undergraduate classes would be fully online for 2020-2021, but it would allow 40 percent of its undergraduates to return to campus.

MIT announced Tuesday – just after the ICE announcement – that that it would implement a “hybrid on-campus and online program,” allowing seniors and some particularized-needs students to return to campus, while still taking classes online.

MIT and Harvard had worked for months, they said, to determine the correct response to the coronavirus pandemic. Harvard “engaged eight formal committees” and MIT 14 working groups, teams and committees. Both schools relied on a March 13 guidance memorandum from ICE that allowed international students to maintain their visa status while participating in online classes. It was that guidance that was revoked by the Monday announcement.

The schools, like many in higher education, depend on their international student bodies both for revenue but also to support the diversity of their learning environments. 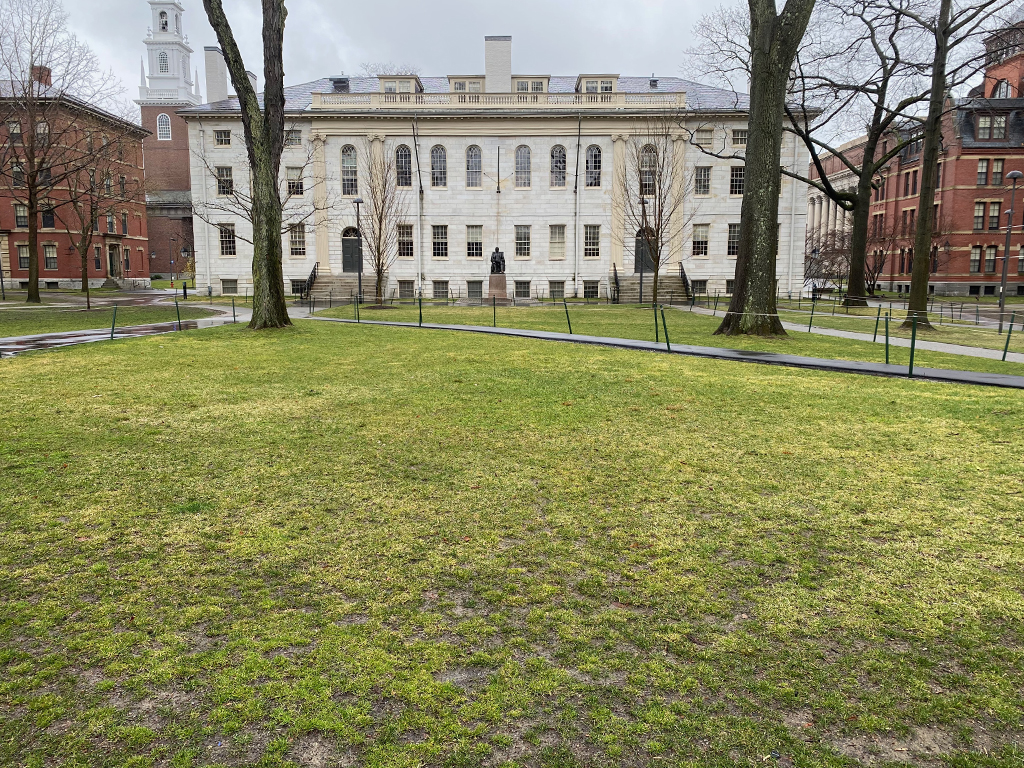 Harvard Yard is empty in March after a coronavirus shutdown meant to reduce the spread of infection. (Photo: Marc Levy)

ICE’s policy “is as cruel as it is capricious,” the schools said in their filing. “If allowed to stand, ICE’s policy would bar hundreds of thousands of international students at American universities from the United States in the midst of their undergraduate or graduate studies. The policy would also force American universities into an impossible choice: lose these students, who bring enormous benefits to their schools and our country; or act contrary to their considered judgments about how best to protect the health of their students, faculty, staff and the surrounding public, potentially jeopardizing the health of the entire university community and beyond. ICE’s policy is supported by neither logic nor law, and the court should enter a temporary restraining order against it.”

To win an emergency court order, Harvard and MIT have to satisfy four factors: that they would likely prevail in the lawsuit at the normal pace; that they would suffer irreparable harm without an injunction; that the balance of equities tips in their favor; and that the injunction would be in the public interest.

On the first, why they would prevail on the “merits,” the schools advance three independent arguments, all under the federal Administrative Procedure Act:

That ICE’s July 6 directive is “arbitrary and capricious because it ‘entirely fail[s] to consider … important aspect[s] of the problem.’” ICE did not consider the effects of its policies, and it “may not announce such a dramatic policy shift ‘without any consideration whatsoever’ of these effects.” The directive also failed to consider the fact that the schools relied on the March 13 guidance, they said.

The Monday directive “does not articulate any rationale that would justify ICE’s decision,” and it is legally required to do so.

That the Monday directive violates notice-and-comment requirements for new rules to be published in advance, with comment solicited from the public.

Harvard and MIT argue that they are irreparably harmed by the policy, because it “is essentially impossible” for students to transfer to other schools for the upcoming semester given the timing and realities of the admissions process, and that many international students now in the United States “will face prohibitive difficulties and costs in traveling back to their home countries” and would “face enormous challenges” even if they got there, such as inadequate Internet access for remote learning, time zone differences, safety concerns and visa deadline consequences.

“ICE has casually disregarded the extensive planning universities have undertaken over the past few months and thrown the lives of tens of thousands of students into sudden disarray,” the schools write.

As for the balance-of-equities and public interest factors, the schools say they win there too: “As between a reckless reopening and a carefully planned and orderly system that puts the health of the entire community first, the public interest favors the latter.”

State to join the fray

The Massachusetts attorney general, Maura Healey, announced Tuesday that she would sue to stop ICE’s policy:

“As our colleges and universities navigate this unprecedented pandemic and grapple with how to continue teaching students, the Trump administration has found ways to create more uncertainty and disruption. Massachusetts is home to thousands of international students who should not fear deportation or be forced to put their health and safety at risk in order to advance their education. This decision from ICE is cruel, it’s illegal, and we will sue to stop it,” Healey said.

At the Thursday hearing, the state solicitor, Bessie Dewar, was present. She frequently handles high-profile litigation for Healey’s office.

Healey’s office said Thursday that it was “still working out the details” on its lawsuit, but had been in touch with major colleges and universities in the state and would “support their efforts to protect students.”

The federal government, in perhaps a tactical choice, sent only one lawyer to the hearing: Rayford A. Farquhar, the chief of defensive litigation for the U.S. Attorney’s Office for the District of Massachusetts. Farquhar frequently handles emergency matters for the government that come up in federal court in Boston. His presence Thursday does not necessarily mean much; the case could be handled by his office, but it could also be handled by attorneys from the Department of Justice in Washington, or some combination.

Harvard and MIT were represented at the hearing by a group of eight, with four from WilmerHale: Lee, the lead lawyer with a strong Harvard connection; Seth Waxman (a former U.S. solicitor general); Paul Wolfson; and Felicia Ellsworth. Two attorneys each from Harvard and MIT attended as well.

Lee was on the video call from an office; Farquhar sat in front of white painted wood-paneled wall; and Burroughs presided in front of a virtual American flag with her disembodied head flickering in and out of the image like Oz the Great and Terrible.