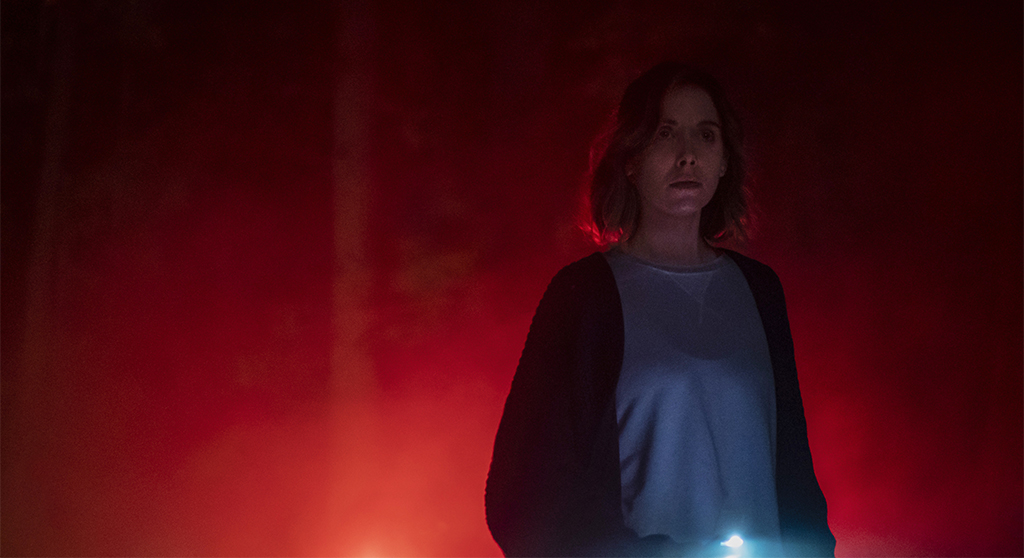 The house in the woods or remote enclave has long been a ripe setting for horror and home invasion fare. Wes Craven’s brilliant and brutal “The Last House on the Left” (1972) and Polanski’s unheralded “Cul-de-sac” (1966) defined and seeded the genre; those that came after have checked in with mixed results, with most failing to live up – but that’s understandable, right? Dave Franco (brother of James) makes his directorial debut with “The Rental,” a polished yet pat psychodrama that turns full horror thriller by the end and even dips its toe into more culty genre.

The setup’s familiar: Four toothsome young adults on the threshold of a more settled life (marriage and kids) brew up something of a last fling getaway in a modernistic spread abutting the sea-splashed cliffs of Northern California. Charlie (Dan Stevens, “Downton Abbey” and “Eurovision Song Contest: The Story of Fire Saga”), a tech entrepreneur who is rocking and raking it in, is newly married to Michelle (Alison Brie, “Mad Men”). Along for the fun is Charlie’s fun-loving but bad luck brother Josh (Jeremy Allen White) and his girlfriend Mina (Sheila Vand), who’s a close collaborator (perhaps too close?) of Charlie’s at the tech firm. The unique and relevant twist (the script is by Franco and mumblecore/mumblegore stalwart Joe Swanberg) is that Mina, who’s Middle Eastern, is denied the rental that “white guy” Charlie scores 20 minutes later. Charges of racism fill the drive up and the caretaker of the estate Taylor (Toby Huss) appears to something of a rube you’d peg for a Trumpster. It doesn’t help that he admits to partaking of the bottle liberally. To veiled charges thrown by Mina, he seems genuinely clueless, and we do get early peeks at the house from the point of view of someone outside spying in. Is it Taylor, Jason, Freddy or some other malcontent with malicious intent?

That brooding unhappiness gets swept aside with a few hits of ecstasy and a lot of “babe” this and that. The lot’s a fairly generic bunch, and you can’t wait for whatever it is lurking in the woods to emerge and chop of few of them up. It doesn’t happen right away; the initial ill deeds spew from within the four. The dog (a cute French bulldog), who according to the rules of the house should not be there, goes missing, and then they discover video cams in the bathrooms – an Airbnb nightmare, but they can’t go to the cops because of their own transgression. And yes, a body turns up and the four must decide how to play it out. They don’t choose wisely.

How it all wraps up is orchestrated smartly by Franco and Swanberg with a lot of help from the misty, lush cinematography by Christian Sprenger and a mood-setting score by Danny Bensi and Saunder Jurriaans. The running length of just under 90 minutes is a win, too, and Franco and Swanberg hit the final bend deciding not to revel in gore so much as provocation, leaving enough teasingly unanswered that you want the film to go on. I can’t imagine there’s a world without “The Rental 2” and maybe more. There’s nothing too deep here, just parts of other works stitched together for lean, mean effect.