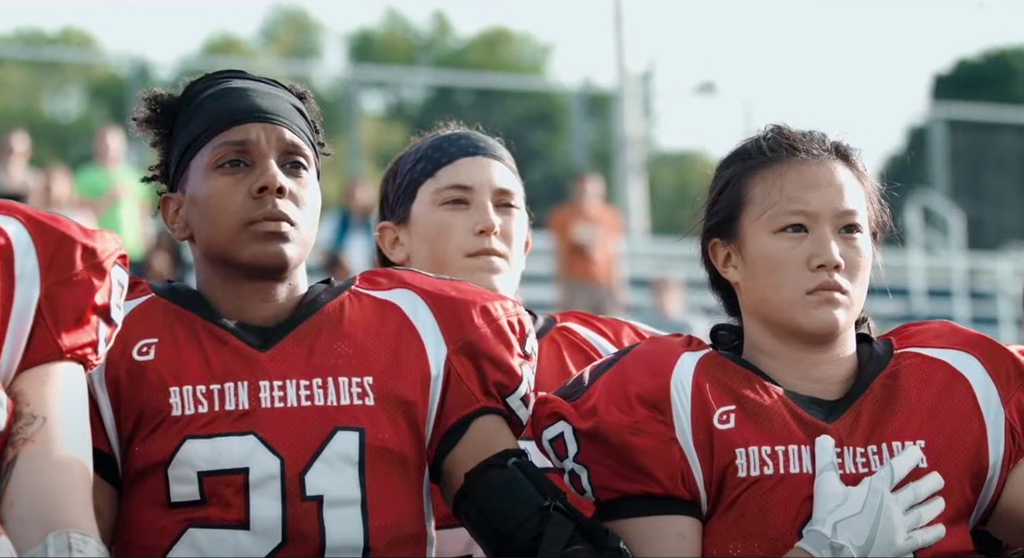 Viridiana Lieberman’s documentary about women’s professional football captures lightning in a bottle as it tackles the lives of underpaid professional athletes, their unbridled commitment to the sport and the camaraderie of gridiron sisterhood that feels even more genuine and binding than with their male counterparts. The good news for us Boston area folk is that the team Lieberman tags along with is the Boston Renegades, which is made up of an olio of players from various walks of life and all ages – a few even doing the Tom Brady thing, playing at a high level well into their 40s. The quality of play and skill is more than impressive, as is the community, fan and familial support around the players and the league. When they’re back on the field (in Revere), I’m heading to a game.

The last and least of six strong collaborations between Chinese director Zhang Yimou and actor Gong Li before they split as a couple (they would reunite for the visually opulent “Curse of the Golden Flower” and “Coming Home” in the 2000s). The yarn about mob gangs in 1930s Shanghai builds around a 14-year-boy (Wang Xiaoxiao) employed by a top crime boss (Li Baotian) and his mistress (Gong), a nightclub singer who goes by the moniker of Bijou. The film’s told from the the boy’s viewpoint and as a result, the narrative occasionally has a halting quality. The scenes of sudden violence, however, are orchestrated with visceral effect by Zhang, and the scrumptious cinematography (in a dark and slick color palette) earned Yue Lü an Oscar nod. But of course, the centerpiece of “Triad” is the mercurial projection and complex aloofness of Gong, who has proven to be the Catherine Deneuve of Chinese cinema. The 25th year restoration is offered through the Brattle’s Virtual Screening Room.

Zhang’s magnum opus (to date) about a college student (Gong) whose father falls destitute, forcing her into the servitude of a wealthy businessman as a concubine in 1920s China. Gong’s Songlian is the youngest of the four indentured women relegated to the vast complex – an impressive structure that takes on a life of its own. Her arrival inflames the preexisting strife among her counterparts who jockey to be the one selected each night (to have the red lantern raised outside their cabana). Selection means pampering by staff, the privilege of selecting the menu that day and the right to lord it over your rivals and frenemies. The feminist anthem here is a subtle wisp bolstered by sumptuousness, Zhang’s masterful composition and Gong.

A nice return to form by Zhang after jumping the shark with the cockamamie “The Great Wall” (2016) starring Matt Damon and a throng of cheesy CGI monsters. Here, in an ancient “great walled” country (clearly China, but fictitious, nonetheless) two clans remain at uneasy odds after ganging up to conquer a vying third. The film, gloriously shot in shaded color by Xiaoding Zhao, deals with the resolution of that conflict, culminating in frequent magnificent military battles. The ebb and flow, political backstory and convoluted espionage threads are a lot to take in, but “Shadow” on the whole is a tour de force on an epic scale. (Read the full review from  May 9, 2019.)

The eve of the end of British rule in Hong Kong is personified by Jeromy Irons as a Brit living in the international city. He’s the author of a book called “How to Make Money in Asia,” and his end is nigh too – he has leukemia, and six months to live. As a last leap at life he falls for a beautiful bar hostess (Gong), who belongs to a Chinese businessman. The film, directed by Wayne Wang (“The Joy Luck Club,” “Blue in the Face”) from a script he co-wrote (Wang grew up in Hong Kong) with, among others, Jean-Claude Carrière (“The Discreet Charm of the Bourgeoisie” and “Birth”) is soulful elegy, without dismissing the clear colonial scars, and a trumpeting of change. A jocular yet melancholy Rubén Blades tags along as Irons’ sounding board, and Maggie Cheung delights and intrigues as a street performer.

Produced by Steven Soderbergh and directed by Brian Welsh, who’s had a turn in the “Black Mirror” series, this is a fun dial back to 1990s rave culture in Scotland (and because of the fierce accent, is subtitled). We catch up with Johnno (Cristian Ortega) and Spanner (Lorn Macdonald), teens who have been pals for life. But Spanner has no oversight, just a delinquent older brother, while Johnno lives a typical nuclear, white collar existence, and mum and pa don’t see Spanner as the ideal running mate. The goal is to get to the big rave (think Doug Liman’s 1999 energy shot, “Go”) but raves are banned and the subject of strict law enforcement. Police and police brutality factor in large. The film’s shot in stark black and white (it has the feel of Mathieu Kassovitz’s “La Haine”) with a few “Oz” like ventures into color (psychedelic drugs will do that). Macdonald and Ortega strike gold in their characters’ bond, which is the true heart of the film.

The second installment of Oliver Stone’s Vietnam trilogy (along with “Platoon” and “Heaven and Earth”) and perhaps Tom Cruise’s finest performance (his fantastic turn as Frank T.J. Mackey in “Magnolia” duly noted). The film, based on Ron Kovic’s memoir, details the Vietnam vet’s trajectory from war hero to paraplegic antiwar protester. The scenes of Cruise paired with Willem Dafoe as a similarly liquored-up paraplegic, dislocated and discontent, are moments of golden chemistry and thoroughly felt frustration and anger – and camaraderie. Cruise would earn his first of his three Oscar nods here (followed by another Best Actor tap for 1997’s “Jerry Maguire” and a supporting recognition for his collaboration with Paul Thomas Anderson for “Magnolia” in 1999). The eclectic and incredible cast assembled by Stone in this patriotic anti-patriot statement includes Tom Sizemore, Vivica A. Fox, James Le Gros, Kyra Sedgwick, Tom Berenger, Abbie Hoffman, Ed Lauter, singer Eddie Brickell and two Baldwin brothers.

Infectious in its steel-jawed patriotism and strangely, wildly prophetic – who knew this MCU entry from the year Donald Trump entered the Oval Office would come to be an apt symbol of the divisiveness in America today? Made by the Russo brothers (Anthony and Joe, who used this spandex-clad battle royale to prep for the crowning Avenger smackdowns “Infinity War” and “Endgame”), this superhero smackdown has old friends Iron Man/Tony Stark (Robert Downey Jr.) and Captain America (Chris Evans) squaring off, with the rest of the Avenger crew having to choose sides. One of the better MCU installments (“Guardians of the Galaxy” pretty much the tops) because of the dark personal stories dividing the heads of the warring factions. (Read the full review from May 5, 2016.)

Jeff Nimoy, something of an anime star, plays Jeff Nimoy, an anime star, at a Comic-Con style gathering. Our cult hero is broke, so he takes a $3,000 offer to be a replacement for a last-second cancellation. The cosplay crowd includes a lot of nerdy types who want pics with the germaphobe Nimoy (hand sanitizer and wipes play a big part, though this is clearly set pre-Covid) and a superfan racily clad as Supergirl in a miniskirt. Then there’s a possible love interest in fellow panelist Nikki Boyer (Nikki Boyer) to complicate matters. In this deconstructive comedy of self-deprecation, Nimoy – who hasn’t had sex in 10 years – can’t get it up when he gets the chance, and he’s been clean and sober for nearly as long, but successfully falls off the wagon. There’s plenty of laughs in the former and some in the latter. Nimoy also writes and directs.

If you’re a Will Ferrell fan, this is lower-tier pap that will just barely do the trick. It’s fairly long for a one-note idea, which is that a pair of Icelanders, Sigrit (Rachel McAdams, whose wide-eyed purity could be better used in another film) and Lars (Ferrell, looking like a Bee Gees tribute band escapee), want to compete in the famed contest of the first part of title as the tandem of the second part of the title. Some of the raucous singalongs (such as Madonna’s “Ray of Light” at an afterparty) are orchestrated brilliantly and fun to take in, but the underdog-cum-romance narrative is often overplayed and sometimes pointless. Besides the high production values and entertaining musical numbers, the winner here is Pierce Brosnan as Ferrell’s father, who even with a beard and gray hair looks eternally virile and regal. Abba songs get plenty of play, as does the term “sex nuts.” Can’t imagine many Icelanders warming to this form of representation.

Coronavirus edition, XVI: Films to shelter with, from the silliest of spies to harrowing abuse doc