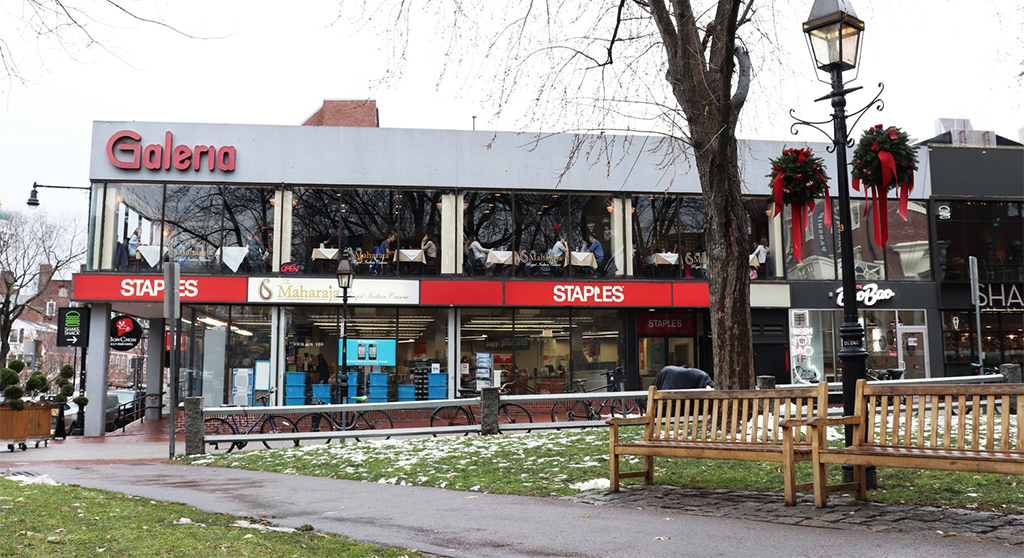 The Crimson Galeria, by the Winthrop Square park in Harvard Square, may host a pot shop.

In a turnaround that’s drawing attention and charges of hypocrisy, Cambridge’s most vocal opponent of pot shops plans to host one.

Raj Dhanda, owner of the Crimson Galeria in Harvard Square, would be the site of an adult-use retail marijuana seller organized under the name Blue Enterprises, with a community outreach meeting planned (via Zoom call-in and video conferencing) for 6 to 7 p.m. Thursday. His Brookline-based Academy Hill Realty confirmed Blue Enterprises is a tenant.

The Thursday meeting will be run by Tabasuri Moses, according to a spokeswoman at Academy Hill Realty, although Moses said he was only participating as a part of the group behind the business. Moses is also chief executive for Green Soul Organics, a pot shop seeking to open in Central Square.

It was only a few years ago that Dhanda hired two firms – one in Washington, D.C. – to file suit against the neighboring Healthy Pharms pot shop, claiming that his property value had dropped $27 million because of it. Pointing out that even though pot was legal in Cambridge and Massachusetts, it was against federal law, he seized on the letter of the law to demand triple damages of $81 million under the Racketeer Influenced and Corrupt Organizations Act.

In September 2017, Dhanda said his businesses had been “substantially injured by a conspiracy to sell marijuana.”

“Marijuana businesses make bad neighbors, which include without limitation emitting pungent odors, attracting undesirable visitors, increasing criminal activity, driving down property values and limiting the rental of premises,” he said at the time, listing his various businesses as having “suffered serious and substantial injuries caused by the operations of a nearby marijuana business, including but not limited to significant diminution in property value, restricted ability to lease space and infringement of the ability to pursue a redevelopment plan to bring certain of their properties to their highest and best use.”

The settlement won him more than $1 million and forced the sale of Healthy Pharms by Paul Overgaag, who runs the Red House (which was renovated to make room for the shop) and Charlie’s Kitchen around the corner.

On Thursday, a spokeswoman at Academy Hill Realty said there would be no comment on Dhanda’s seeming evolution on the matter of hosting pot shops.

The business is reportedly going in the expansive space that was the Galeria’s two-story Staples store – a 2,539-square-foot shop with a 120-foot facade. That would place it across from Winthrop Park and just a handful of storefronts from Healthy Pharms. The spokeswoman at Academy Hill Realty also identified the business as part of the international Cookies cannabis chain.

The shift by Dhanda is drawing attention. A letter-writer to Cambridge Day said, “The hypocrisy shown by Raj Dhanda is galling.” While pursuing the lawsuit, he upset other business owners in the square by misrepresenting them as also opposed to Healthy Pharms, The Harvard Crimson reported in 2018.

“He’s not an owner, he doesn’t have an ownership stake in the business that will potentially be going in the square … we know him as a landlord,” Moses said of Dhanda. “From our standpoint, we’re just grateful for the opportunity. There was no one else in Harvard Square, up until this point about willing to lease a space so we could actually have this conversation and start this process.”

“We just want to be held on our own merits,” Moses said.

Dhanda also wants to enlarge The Crimson Galeria and add a 9,295-square-foot third floor, a 8,090-square-foot fourth floor (most of it general office space, but with a 1,700-square-foot roof deck) and a 2,409-square-foot mezzanine to the existing 36,609 square feet – with exemption of some basement space and from parking and loading requirements as allowed by the City Council in 2016, after the board had approved Crimson Galeria expansion plans in 2015.