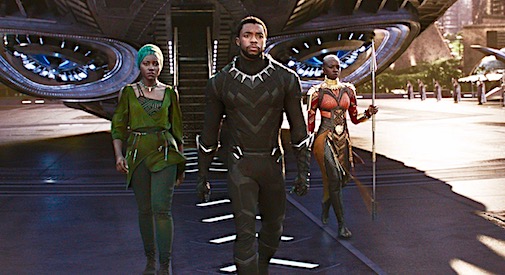 A wedding party at the end of the world. Who else but Lars von Trier (“Breaking the Waves,” “Dogville”) could pair such emotionally opposite events and make it an existential exercise in loneliness, disillusionment and fate? The action takes place on a grand estate where a newlywed couple settle in for a celebration with a small posse of family, friends and coworkers. The bride is emotionally aloof and wandering in her desire. Kirsten Dunst is a revelation (as in Sophia Coppola’s “Virgin Suicides”), and Charlotte Gainsbourg (“Nymphomaniac”) is as riveting as ever as her sister. The sense of dread and isolation feels reflective of the now. The reason for the end of our blue planet? A bigger blue planet on a collision course, aptly named “Melancholia.”

Sophia Coppola’s remake of the 1971 version directed by Don Siegel and starring Clint Eastwood is a cloistered psychological affair set in the near postbellum South, where a Yankee soldier (Colin Ferrell) is brought to an all-woman seminary to recuperate. Christian values and sexual desires clash mightily, as do the ideologies of North and South. Kirsten Dunst and Nicole Kidman lead the excellent female cast of buttoned-up prims raging with conflict inside. (Read the full review from June 29, 2017.)

In this politically probing documentary, Moroni Benally runs for president of Navaho Nation, the largest indigenous people’s organization in the country and a powerful post that controls casino allocations, government funds and other revenue. The major hurdles Moroni faces are that he’s gay, young and Mormon. In short, not your typical Navajo politician. One of the telling things in the film by Saila Huusko and Jasper Rischen are the poor conditions many of the people live in, given the documented resources. Not only have they been “occupied” by the U.S. government, as Benally says, but you feel they’re given a bad deal by their own as well.

In this crime drama, a mixed-race FBI agent (Val Kilmer) is paired with a gruff, insensitive higher-up (Sam Shepard) to investigate a murder on a poverty-stricken Sioux reservation. Graham Greene, Fred Ward and Fred Thompson round out the cast of this straight-ahead murder mystery directed by Michael Apted (“Gorky Park,” 1983).

Another FBI investigation of a disappearance/murder on an Indian reservation. Because the FBI agent (Elizabeth Olsen) is from Florida, she’s a fish out of water in the Wyoming wilds and enlists the aid of Jeremy Renner’s tracker out of the fish and wildlife division. Themes of rampant domestic abuse and worse on reservations are plumbed, but the film is soulful and reflective in its handling of the subjects. Directed by Taylor Sheridan, who garnered an Oscar nod for “Hell or High Water” (2016), and also starring Graham Greene. (Read the full review from Aug. 11, 2017.)

Minos Nikolakakis’ tale of lore and mythos in a Greek village is pat and staid. Films such as “The Witch” (2015) and “The Wicker Man” (1973) knew how to create ambiance and mystery; Nikolakakis is more perfunctory in a story of a doctor taking up a remote post and becoming enraptured with an affected waif he keeps running into in the woods. Dark sexual secrets and the supernatural pop up – but as said, it’s been done much better before.

A better, moodier – and more terrifying – take on trips to remote villages that go askew. Everything is fun and LSD games at first for a visiting group of anthropology students; but after a grand and glorious smorgasbord, seasonal fertility rites begin. This is Ari Aster’s gaily grim follow-up to “Hereditary” (2018). (Read the full review from July 3, 2019.)

The life of Sister Lucia, who, as a 10-year-old girl in 1917, along with two of her cousins, claimed to have seen visions of the Virgin Mary in a field of the titular Fátima, Portugal. Throngs of believers crowded the field and the government launched a suppression effort. The film, directed by Marco Pontecorvo, son of the filmmaker Gillo Pontecorvo (“The Battle of Algiers” and “Burn!”), is told in flashback, with Harvey Keitel as an academic piecing together the historical narrative. The film may be of interest for the devout, but otherwise it’s a plodding meander that tells of a slightly intriguing footnote of early 20th century history.

Something of a fusion between “Slacker” (1990), “Clerks” (1994) and “Mystic Pizza” (1988), and while not as good as any, still worthy of a screening. The “pie” of the title is a pizzeria in a small, cloistered suburb (Irvine, California) where Crispin (Todd Knaak, who also co-wrote) takes up the ladle, hangs out with other dude-ly dudes and pines for women and a better life. Is that college, a career, his dream partner? Nothing new here, but it’s well-intentioned and well made for what it is – director/co-writer Jay Salahi put it all together with crowdsourced funds of around $12,000.

Sad news this week with the death of actor Chadwick Boseman, 43, best known as a Wakandan warrior but who also played iconic black barrier breakers including Jackie Robinson (“42”), James Brown (“Get on Up”) and Supreme Court Justice Thurgood Marshall (“Marshall”). “Black Panther” was a crossover hit that wove together race, culture, identity and the genre-loving mainstream, and it cemented him as a genuine star.  Throughout his four-year battle with colon cancer, Boseman made this film as well as the MCU “Infinity War” films and others between treatments. (Read the full review from Feb. 15, 2018.)