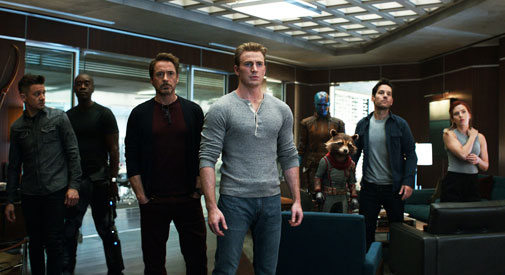 And so it begins, or ends, and no matter how you see it, it’s a long one. “Avengers: Endgame,” the de facto part two of “Avengers: Infinity War,” clocks in at more than three hours – 30 minutes longer than “Infinity” and chock full of maudlin eddies that should have been pared back. That said, “Endgame” gets the job done, passing the baton as it closes out a long-running chapter with some sentimental eye rubs. Where Disney’s Marvel Universe goes from here is likely a focus on new blood such as Black Panther (Chadwick Boseman) and Captain Marvel (Brie Larson). They’re both in “Endgame,” tossed in as inert garnish.

In case you need a rewind: At the end of “Infinity War,” Thanos (Josh Brolin), blessed with the unholy alignment of all six infinity stones (the power of a god to create and destroy), has eradicated half the life in the universe and, with that, half of the Avengers crew. We catch up with Iron Man/Tony Stark (Robert Downey Jr.) floating near-dead in space, Hawkeye (Jeremy Renner) searching desperately for his wife and children and Ant-Man (Paul Rudd) spit out unceremoniously of a five-year time warp – in a beat-up Ford Econoline or the like, to boot. The film moves along sluggishly for the first half-hour, and I’d be wrong to tell you fully how it flies, but the simple answer is: The remaining Avengers crew need to somehow turn back the clock. Given that this is Marvel, and a superhero fantasy (the opening with Traffic’s “Dear Mr. Fantasy” is nearly as ingenious as the use of “Mr. Blue Sky” in “Guardians of the Galaxy Vol. 2” – is there some mandate for classic rock songs with “Mr.” in the title in the Marvel Uni?) that time travel quest – with semi-hilarious film references to “Back to the Future” – happens sure enough, and the “Infinity War” with Thanos gets something of a do-over.

Before that the film notches some of its greatest self-deprecating wins, namely in that the buff god of thunder, Thor (Chris Hemsworth), some five years after Thanos’ win in Wakanda, is now a potbellied booze bag looking like the portly Val Kilmer, “large mammal” portrayal of the latter-years Jim Morrison in Oliver Stone’s “The Doors.” Or take the Hulk/Bruce Banner, (Mark Ruffalo) who has gotten his raging greenness and mild manner intellect to come to terms. And then there’s Hawkeye, who’s been bestowed the worst hairstyle imaginable – an unholy marriage of a mullet and a mohawk. How and why this choice was ever made is never explained and demands a film of its own, but yes, it’s a weird alternate reality out there, and not necessarily a bad one. As one observant Avenger points out, with half as many humans on the planet the water in the Hudson is now so clean, pods of a resurgent whale populations are hanging out where there were once toxically polluted slurries.

Ultimately “Endgame,” like “Infinity War,” both directed by the brothers Russo (Anthony and Joe, who made the far cheekier and superior “Civil War”) turns into a major CGI boggle of superheroes battling a herd of creepy-crawly things from another planet. Amid all the chaos there’s one gratuitous yet neat scene where an all-female phalanx of supers try to get the final wold-saving run done, and yes, Captain America (Chris Evans, with the requisite square-jawed woodenness)  is there to anchor the whole shebang; in very (too) small metes, we also get Samuel L. Jackson, Robert Redford and Tilda Swinton. It’s a very crowded affair.  Some big names and friends move on and out with a tear or two to be shed, but I was more struck by other matters looming at the edges of the frame, including nature’s resurgence in a less populated world, curiosity for how far Brie Larson and the “Captain Marvel” franchise can realistically go and, most of all, that haircut Renner is saddled with. It’s indelible and unshakable. If his Hawkeye could travel back in time to the 1990s there would be NHL hockey teams north of the border that would surely inject him in the first line based on hair alone.