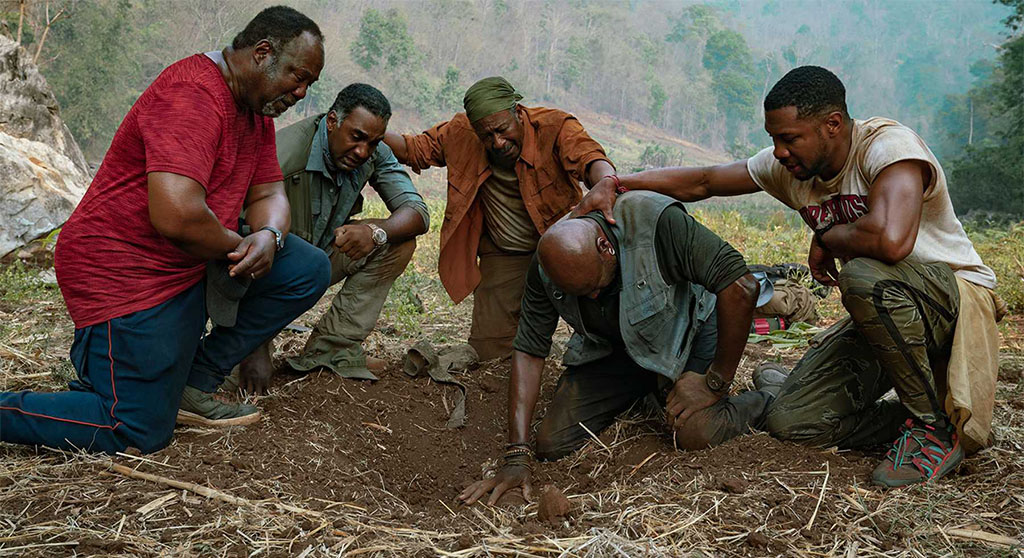 Spike Lee’s latest, “Da 5 Bloods,” was supposed to get a theatrical release, but Covid-19 has changed the rulebook. Lee was also supposed to be a jury member at the Cannes Film Festival last month, but that’s postponed to 2021.

The gorgeously composed film, something of a Vietnam War reconciliation project, is a hot hodgepodge of socially conscious branding wrapped around a treasure quest thriller adorned with reappropriated cultural icons – namely Francis Ford Coppola’s “Apocalypse Now,” which crops up from time to time, most obviously in the form of a disco four of the five titular “bloods” visit upon their return to the country where they fought some 40 years earlier. “Da 5 Bloods” starts out with some archival imagery of the poetically loquacious Muhammad Ali, politically active blacks taking to the street and iconic clips of savagery from the Vietnam War with voiceover telling us that African Americans make up 11 percent of the population but made up 33 percent of the fighting force, posing the question: “Will history stop repeating itself?”

The “bloods” in question were part of an Army squad, and have reunited to return to ’Nam to gather the remains of a fifth blood (Chadwick Boseman, “Black Panther”) who was killed in action. They know loosely where his body is, as well as a hefty stash of gold bricks. Of the returning four, Delroy Lindo’s Paul stands out the most: He’s a Trump supporter (Lee and Lindo vociferously oppose Trump and his policies, but that’s kind of the point), wears a red MAGA cap throughout and has a prickly relationship with his son David (Jonathan Majors), who’s in tow. What ensues is a strange olio of “Grumpy Old Men” gone up river “Apocalypse Now” style before straying into “Treasure of the Sierra Madre” territory as the loot is also sought by a French opportunist (Jean Reno, “Le Femme Nikita” and “The Professional”) and a faction of Vietnamese nationalists who want to settle an old score with the “bloods.” It’s a lot to unpack as Lee continues to stir in revisionist history and social barbs. It’s a compelling mess that’s almost too rich for its own good, and a better war film (postwar film?) than Lee’s 2008 “Miracle at St. Anna.” Somehow too, Paul Walter Hauser (Lee’s “BlacKkKlansman” and “Richard Jewell”) makes his way on scene and that MAGA hat, for better or worse, takes on its own persona.

It’s amazing to realize that Lee won his first Oscar only last year, for the “BlacKkKlansman” screenplay. He’s made a lot of films in his time, and not all have stuck their landing; but as a filmmaker, Lee’s always been a risk taker, and one with something to say. At the end of “BlacKkKlansman” Lee stitched in footage of the violent Proud Boy tiki march in Charlottesville; here there’s a “Black Lives Matter” chant with a hopeful flourish. (Lee also just completed the short “3 Brothers: Radio Raheem, Eric Garner and George Floyd,” which should require no explanation.) “Da 5 Bloods” may not be Lee’s finest film, but it comes at the right time.