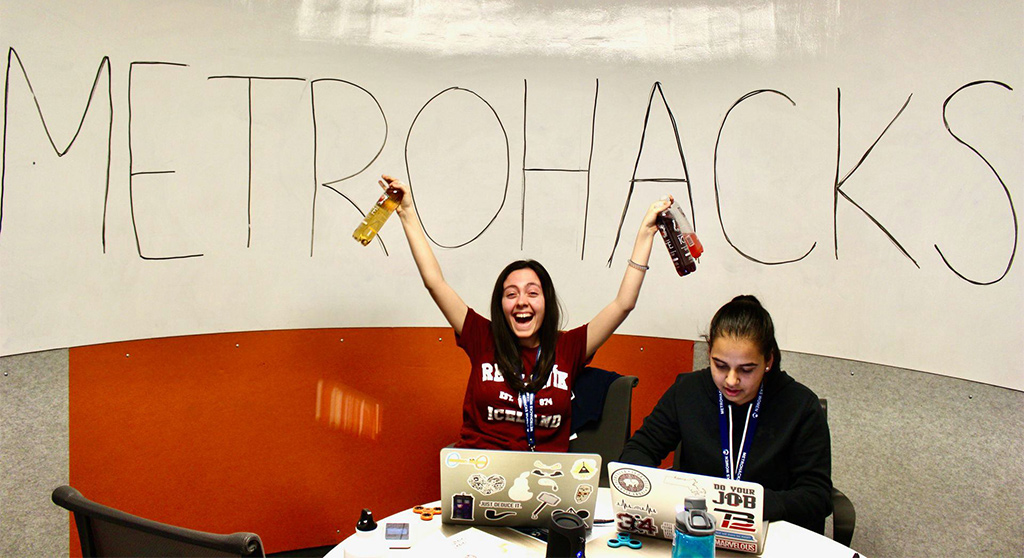 Students work on a project at the 24-hour MetroHacks hackathon held in May 2018 in a Harvard student center. (Photo: Marc Levy)

What started as a local mentorship program has grown into a national contest for girls in science, technology, engineering and mathematics. MetroHacks began in Cambridge in 2015 as a way to empower girls and encourage them to go into those “Stem” fields, which are lucrative but lack sufficient female representation.

Now, the MetroHacks EmpowHer online competition brings together high schoolers from around the country, pairing students with mentors to develop innovative projects. Throughout the yearlong contest, which begins this month, the leaders host workshops and office hours and provide overall support for participants. At the end, the winners get scholarships.

It’s a big leap to a year-round project from the 24-hour hackathons MetroHacks has hosted in past years, but organizers expect the same kind of smart, practical ideas to emerge – such as a winner Kurada recalled from the past year: “One team created a device powered by [artificial intelligence] and sonar imaging that actually drove marine animals away from the site of an oil spill [and] the pollution and danger that it posed to the animals.”

It was hypothesized, researched and created within 24 hours by a group that had just met that day, she said. The hackathons gathered hundreds of student from the region for sprawling brainstorm, creation and presentation sessions in spaces such as Harvard student centers – impossible this year with coronavirus, but an expansion had been a long time coming anyway, said Jiyoon Choi, the branding and design director for EmpowHer. “Over the years of running these huge events,” said Choi, “we just saw that having [a national] program would be so beneficial.”

Underlining the events’ supportive and inspiring environments, MetroHacks can even offer free participation thanks to corporate sponsors such as Staples and Microsoft, said Sruthi Kurada, 16, executive director of EmpowHer.

“Don’t be scared to join us even if you’ve never written a line of code. We are here to support you through every single step of the process,” Kurada said. “We’ll set you up with our mentors who are very kindly giving their time to support the girls participating, as well as our directors who are running all of our curriculum and workshops.”

It is not too late for students to register for the inaugural EmpowHer project, and people who are just interested in the educational opportunities and workshops are more than welcome to attend, Kurada said. Coming up with a hackathon-style project is optional.

The priority is on ensuring girls experience the benefits of being surrounded by other females in science, which can help make up for a shortage of female mentors and teachers. “Maybe girls are not seeing themselves represented in the media or their educators, and they might feel like because they don’t see that representation of themselves, they aren’t a fit for the field,” Kurada said.

Imbalance just “how it’s been”

The MetroHacks and EmpowHer leaders said they see the imbalance firsthand.

Anna Grankin, 16, curriculum director of EmpowHer, says she sees sexism even within her – self-described – progressive school. “Teachers tend to look to guys [for answers], not maybe the girls as much, who are just as capable,” she said.

Kurada is one of four girls on the math team, compared with around 30 boys, and the first female president of her school’s math team in its dozen years. “And that kind of shows how there isn’t enough reaching out to the female community in our school,” she said. The imbalance of women in Stem fields is “not because girls are not capable or not interested. It’s just that that’s how it’s been.”

The problem begins in elementary school, where boys get access to coding classes and other opportunities in Stem that aren’t encouraged for girls, Choi said, who has seen a continuation of that indirect discouragement from within her school’s robotics team.

But the team can also see firsthand the impact MetroHacks and EmpowHer have had on their community. Seeing another student on the robotics team launching a STEMinist club has convinced Choi that “we’re on the right track,” while Grankin said she’s seen more girls showing up to computer science clubs.

Information on EmpowHer is here.