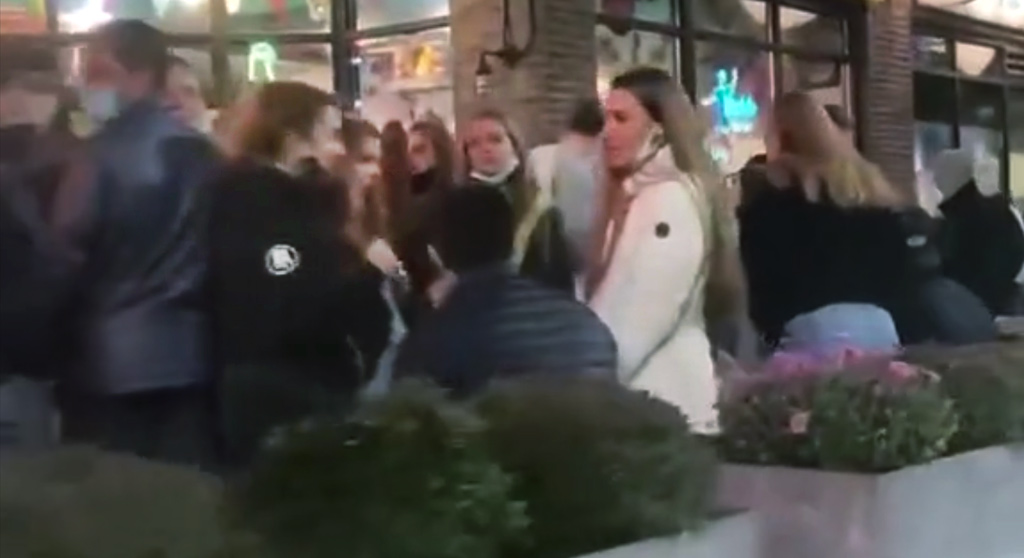 The number of Covid-19 cases in Cambridge has been rising steadily since July, yet the city’s conservative Covid-19 policies have helped keep Cambridge one of the lowest-risk large cities in Massachusetts, top city officials said at the Monday meeting of the City Council. Two city councillors, though agreeing, said videos showed instances where young people have openly and flagrantly disregarded distancing and masking rules in public with no sign of enforcement.

One video showed a group gathered in Harvard Square on a Saturday night, with “maybe close to 30 college-age people. Out in front of a restaurant, no social distancing, no mask. Anybody who had a mask had it around their chin,” councillor Marc McGovern said. “I’m worried.” He added that he has received emails describing “full-court [basketball] games with no masks,” and that “it is a struggle for unhoused folks in terms of keeping a mask.”

Councillor E. Denise Simmons said she had received another video depicting a “party bus” in Cambridge Crossing “picking up young people, no distancing, no mask and it looks like alcohol is involved” because the video “shows them carting alcohol to the bus.” The passengers were “all crowded on the bus” at 10 p.m. on a weekend night “not practicing any of the things we asked,” she said.

Both councillors said they sent copies of the videos to City Manager Louis A. DePasquale and called for more enforcement of the city’s emergency orders; Simmons said the buses had been picking up youths at Cambridge Crossing for several weekends. “We are supposed to be talking to the management company to see if we can stop or curtail that policy,” she said, without naming the company.

DePasquale acknowledged that the videos showed that “we really need to get moving with some enforcement. We’re on top of [it] and we’ll get out there.” He did not discuss the management company’s possible role, and city spokesman Lee Gianetti didn’t respond to questions.

In another Covid-19 development, the city will begin sampling sewage at three locations early next month and test it for presence of the virus. The council approved spending $175,000 on the program, which is expected to detect outbreaks before they show up in test results and overcome possible gaps in surveillance because not everyone is getting tested.

City Engineer Kathy Watkins told councillors that samples will be collected weekly for six months at three locations in East Cambridge, North Cambridge and Cambridgeport, which will cover the entire city because of the way the sewer system is laid out. Biobot, the same company that tests wastewater for the coronavirus at the Deer Island Sewage Treatment Plant for the Massachusetts Water Resources Authority, will do the testing.

Watkins said results from the three sampling locations can be reported separately and the city can zero in on smaller areas if desired. “We will consider additional [sampling] sites to get to neighborhood-level data,” Chief Public Health Officer Claude Jacob said. The city’s public school district uses data from Biobot’s Deer Island testing, which covers 61 Eastern Massachusetts communities, as one measure of public health safety for decisions on school openings.

The city’s Expert Advisory Panel first discussed testing sewage at its April 28 meeting and heard a presentation from Biobot on May 10. DePasquale thanked the Public Works and Public Health departments for “jumping on this and being the leaders,” adding that they had “jumped on it quickly.”

Looking to the numbers

Although the city remains in the “green” category of low risk, according to state figures, the average number of new cases here rose to 3.3 infections per 100,000 population in the most recent state report on Oct. 14, compared with 2.4 cases per 100,000 in the Oct. 7 report. It was just two cases per 100,000 at the beginning of September. The number represents confirmed new cases averaged over the preceding two weeks. Cities in the green category have fewer than four new cases per 100,000; those in the yellow category between four and eight new cases; and communities in the red zone, 8 or more new cases.

Among surrounding cities and towns, Belmont and Brookline are green; Boston and Somerville are red. Many public health and infectious disease experts, as well as city officials directing the response to Covid-19, have expected cases to rise as schools and colleges reopen, the weather gets cooler so people must spend more time indoors and the public gets tired of paying attention to pandemic precautions.

In another sign of increasing cases, the number of Covid-19 patients at Cambridge Health Alliance’s two hospitals in Cambridge and Everett has been rising in recent weeks. On Monday there were 24 admitted patients, with four in intensive care. The case census reached 24 patients only one other time since Sept. 1 – on Oct. 11, according to state figures. It was four patients on Aug. 19.

Even so, the Alliance is nowhere near overwhelmed; there were 53 Covid-19 patients on May 15 during the coronavirus surge, and spokesman David Cecere said last week: “We are monitoring the level of COVID-19 cases and have plans in place to care for both Covid and non-Covid patients. At this time, we are well within our normal operating limits.”