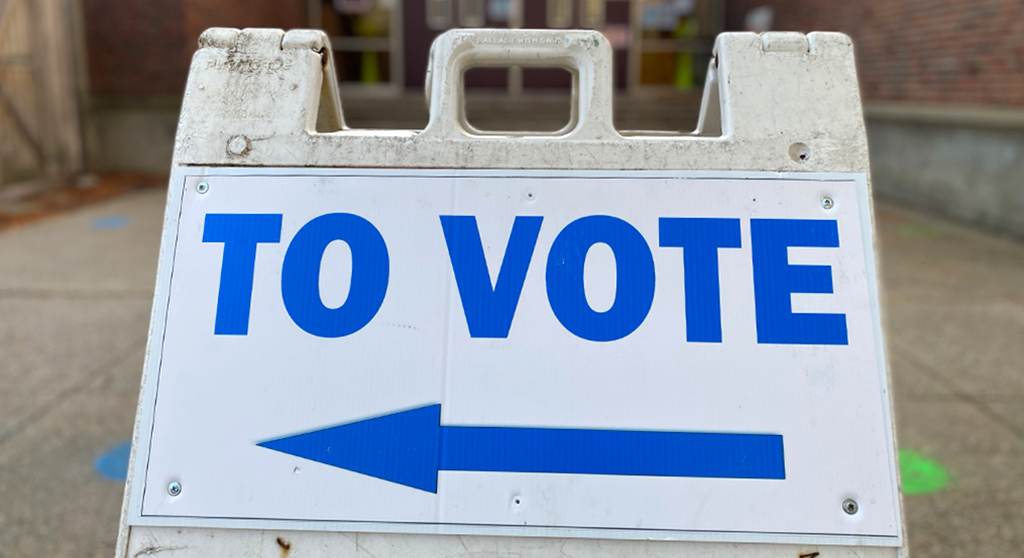 A sign directs voters to a polling place Tuesday at the Graham & Parks School in Neighborhood 9. (Photo: Marc Levy)

But in concrete terms, Trump got 3,248 votes in Cambridge, actually a decrease from four years ago when it was 3,323 votes.

In the unofficial results posted by the Election Commission at around 1:25 a.m., there were 49,813 ballots cast in Cambridge on Tuesday, and 44,426 of them were for Biden and Harris.

Statewide, in results reported by media such as The Boston Globe and New York Times, Biden was reported as getting 65.5 percent of the the vote vs. Trump’s 32.2 percent. Four years ago, Hillary Clinton won 61 percent of the vote to Trump’s 36 percent.

On statewide ballot initiatives, the esoteric Question 1 passed resoundingly, ensuring small repair shops would get the same access to cars’ sophisticated computer data as authorized dealers; and Question 2, which would give all of Massachusetts ranked-choice voting like Cambridge has had since 1940, was also well ahead as of early Wednesday. Question 3 was a nonbinding encouraging statewide use of renewable energy sources, and Question 4 was also nonbinding and called for more transparency on votes in the Massachusetts House of Representatives. They broke down as follows:

Question 1 on the “right to repair.” Eighty percent of Cambridge voters approved, compared with 75 percent statewide.

Reelections and a newcomer

Democratic U.S. Rep. Katherine Clark took an easy victory over Republican challenger Caroline Colarusso, with 92.6 percent of votes cast in the race in Cambridge and 73.1 percent of the vote districtwide; Colarusso took 7.2 in Cambridge votes and 26.9 percent districtwide.