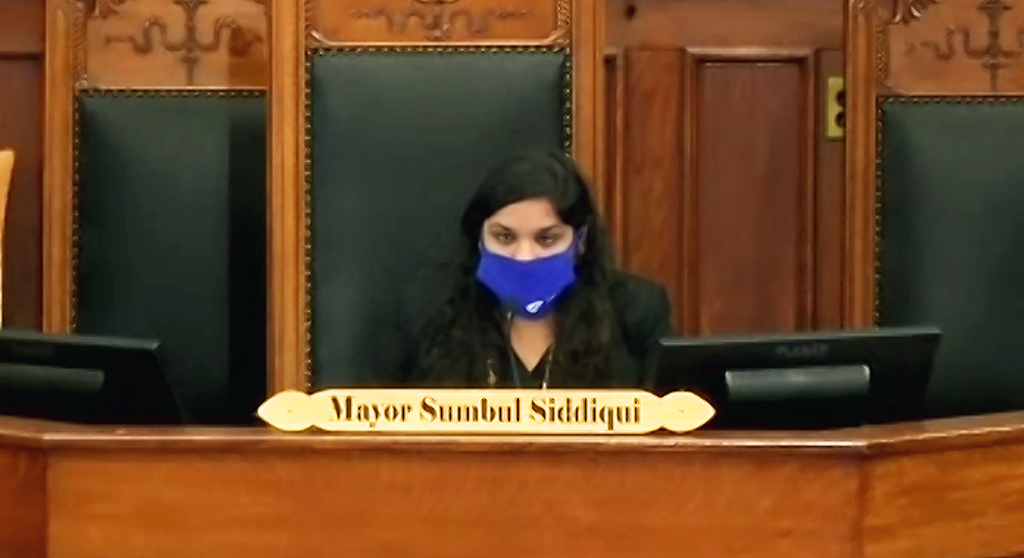 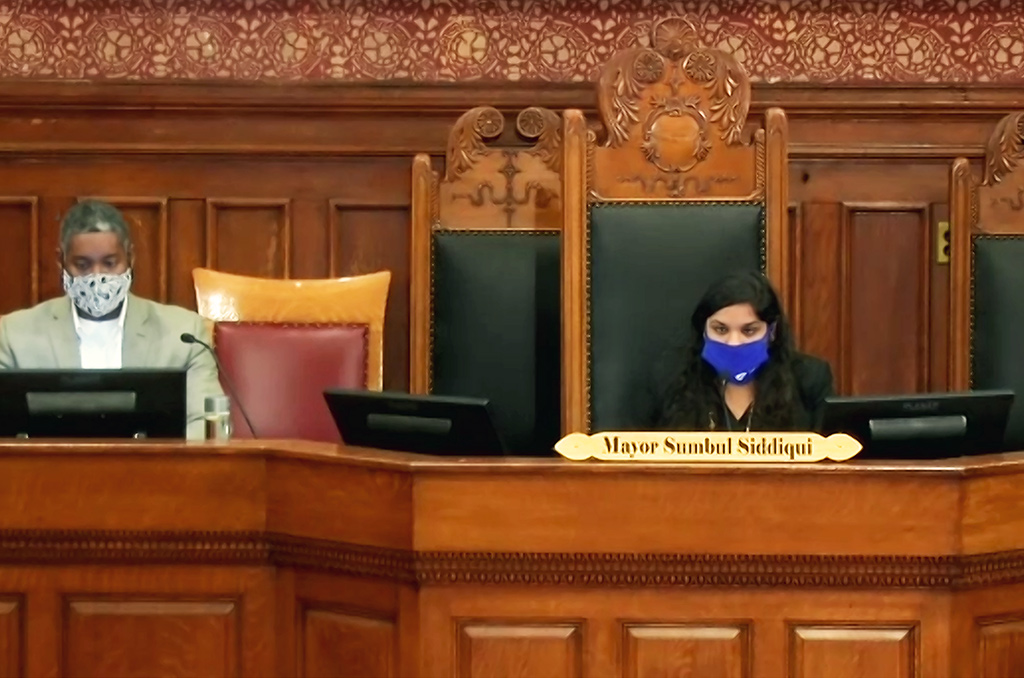 Mayor Sumbul Siddiqui at Monday’s meeting of the City Council.

With schools on the verge of closing because of skyrocketing Covid-19 cases in the community, the mayor and vice mayor made an impassioned plea Monday to move toward working with surrounding communities to close down indoor dining, gyms and similar activities, only to have it blocked by one councillor. The “charter right” exercised by councillor Tim Toomey means the measure is dead until the next council meeting, Monday.

That would not keep City Manager Louis A. DePasquale or health commissioner Assaad Sayah from acting, as they did during the spring surge, to reimpose restrictions on businesses. But Mayor Sumbul Siddiqui, whose voice broke as she said schools were close to ending in-person attendance, said DePasquale had told her “he will not close [indoor business activities] without more action from the governor” and from other cities regionally.

The blocked measure, filed at the last minute by Siddiqui and vice mayor Alanna Mallon, requested that DePasquale “confer with the Metro Mayors’ Association to close indoor dining, gyms, casinos and other nonessential indoor activities as soon as possible” and that the city administration “organize a small-business and restaurant relief program” to help the affected businesses.

Toomey’s charter right ended the council meeting abruptly. “The schools are gonna close this week,” Siddiqui said as she ended the session, and a video from immediately after the meeting’s end revealed raised voices against Toomey. There are some 1,500 students getting in-person lessons, she said.

Cambridge, like the state and communities nationwide, is in the throes of a Covid-19 surge. On Monday, the city reported 44 new cases, by far the largest increase in a pattern of rising cases since early October. Mallon said the seven-day average of new infections “is almost 25 cases per day, which is the Cambridge Public Schools metric to close with one other metric. We are close.”

Toomey, 67, has served on the council since 1990 and was a state representative from 1993 to 2016. During the pandemic he has asked repeatedly for tougher enforcement of outdoor mask-wearing rules and has favored caution in opening city streets and Memorial Drive to pedestrians and cyclists. Many public health and virus experts say outdoor transmission of the virus is rare and indoor activities pose the major threat.

Speaking against the policy order, Toomey said it mentioned casinos and gyms. “We talk about casinos. There’s no casinos in Cambridge. Gyms, there’s very few gyms in Cambridge. Indoor dining, many of these restaurants are already closed,” Toomey said.

As for the threat of schools closing, he said: “Honestly, as far as I can see for the past several months, the schools have not been open, and then just only the pre-K to grade three is open now. Four to 12 are all virtuals.” Toomey called for a “special meeting” at which city officials as well as “the people and businesses who are going to be impacted” can be heard. A lot of people will “be out of work if this goes forward,” he said.

Denise Jillson, executive director of the Harvard Square Business Association, said Tuesday that the mayor’s late order “pits businesses against schools” without any data suggesting it would help prevent the spread of coronavirus, and cited Gov. Charlie Baker saying he wanted to keep schools and businesses open “because they’re not driving the spread of Covid-19.”

The motion, which councillor Quinton Zondervan supported with a call to shut down indoor activities immediately, “is extreme and would be the final blow to many Cambridge businesses, particularly to our small, locally owned independents,” Jillson said.

Earlier in Monday’s meeting, councillors said weekly updates on Covid-19 should resume as the city enters a more dangerous stage of the pandemic. The meeting was the second time in a month that DePasquale, chief public health officer Claude Jacob and police commissioner Branville G. Bard Jr. have not presented the latest information on the virus and city actions and accepted questions from councillors.

Bard did report in a written communication that the issue of “party buses” carrying young people from the Cambridge Crossing area near Lechmere to gatherings on weekend nights has apparently been solved. Passengers were not wearing masks and were crowded, councillor E. Denise Simmons said.

Bard said “there were no complaints or observed violations” of coronavirus rules on the weekend of Nov. 6-8 after police showed up on the two previous weekends and told the limousine company and drivers “that passengers were not following proper social distance guidelines.”

Officers will continue to go to the area, and the city has contacted property managers at DivcoWest “to set a plan of action to address both the residents and bus companies, and [I] can assure you that the police department will continue to work on a variety of fronts to mitigate these concerns,” the response said.