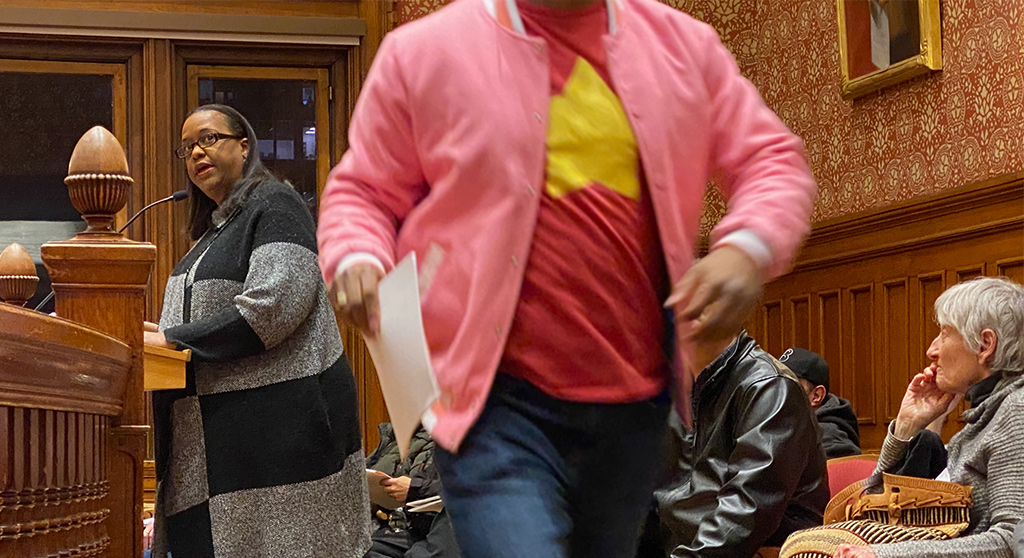 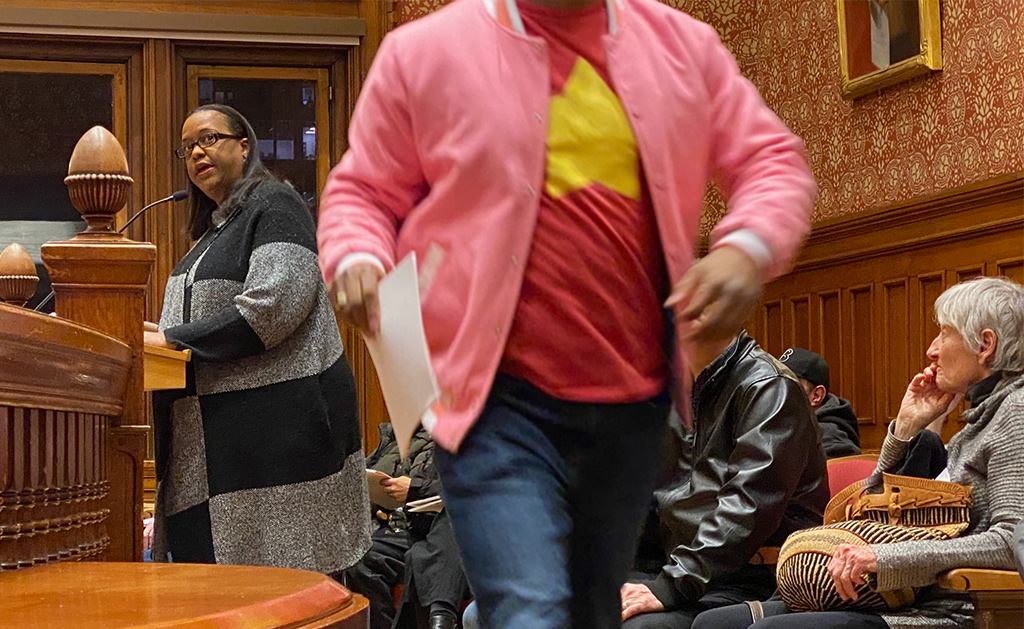 A divisive order about municipal guidance for neighborhood groups introduced a week ago was split in two Monday, both winning unanimous approval from the City Council.

In one, it was decided that a council committee will hold a hearing on “ways to strengthen community bonds and understand whether the city could better support neighborhood organizations.” In the other, the councillors are on record condemning “homophobic bullying and intimidation anywhere in the city” after an Oct. 18 remark by an East Cambridge Planning Team board member – who has since apologized and resigned – on a group email list.

Even supporters of last week’s original order wanted to see it separated from an incident involving one person in one group. People who were opposed saw its inclusion as just a pretext to try to diminish the power of organizations that sometimes stand against or slow progress on large developments. Councillor Patty Nolan, a co-sponsor, had used her “charter right” to delay further debate by one meeting to “work on some of the language.”

“There were really two issues at play, one being sort of the larger issue around neighborhood groups and representation and how can we support and help those groups. And then the other issue, of what many of us found to be disturbing comments made by a board member of a particular group. So we separated them,” said councillor Marc McGovern, author of the orders.

The condemnation of the former ECPT board member’s comments was introduced as a late order on the advice of the city clerk that council rules didn’t allow two substitute orders to replace the same previous order, McGovern said.

Separating the two on paper did not separate the two when it came to public reaction.

Nicola Williams, a business owner and, like Levy, a former candidate for council, also still saw “many problematic issues,” especially in the late order that people “barely had time to wrap their heads around.” While sexual harassment was unacceptable, Williams said the issue had been resolved with the board member’s resignation and the formal apology from the ECPT. And while diversity in neighborhood groups needed to improve just as much as diversity on the city’s own boards and commissions, “neighborhood groups need to independently exist without interference in their regulation from our government.”

Like speakers last week, she suggested the council’s orders crossed a Constitutional line. “We need to preserve our First Amendment rights,” Williams said.

Team president Chuck Hinds did not speak during the meeting. Afterward, reached by phone, he said the council’s orders deserved to be looked at by a lawyer.

Also like last week, commenters said they sensed that the orders had to do with fights over large-scale development. “This smacks of politics,” said Carol O’Hare, a Cambridgeport resident.

But supporters of the order among the public spoke emotionally about what they saw as the headwinds they faced in trying to play a role in the neighborhood groups. Christopher Schmidt had to pause briefly to collect himself Monday, saying he had begun crying, before he finished with the message that city guidance for neighborhood groups could mean “we don’t have to be scared … we don’t have to feel left out.” He said he was scared to speak out at public comment because he’d been attacked personally. The previous week he testified to having been involved in “at least three different neighborhood associations [where members] have commented on my personal life in public in ways that have made me feel attacked and unsafe.”

Loren Crowe, who identified himself as the person targeted by “homophobic bullying,” said it resulted from advocating for causes he believed in. Negative reaction to the order was “a giant flashing sign that some groups need the assistance that the order proposes,” Crowe said. “It’s clear that some groups need outside help to even understand what’s wrong.”

The groups are an “unexamined power structure that hasn’t been looked at in a long time,” he said, questioning if they were guardians of democracy or privilege. “At the mere suggestion of a possible nonbinding conversation at some date in the future about diversity, the power structure is fighting back, defending itself.”

“What happened to me was not an isolated incident. It was a culmination of 18 months of bullying in a group environment whose leadership decided that diversity and inclusion were less important than viewpoint purity,” Crowe said.

Their comments were all the more striking because both men are known as throwing sharp elbows themselves in public fights over development, sometimes in longer posts on Medium and often on social media such as Twitter, though both have deleted some of their more aggressive comments. While Schmidt seems to have reconsidered some of his tweets on the fly, deleting some within an hour or two over the past years, Crowe’s postings seem to have been scrubbed more recently. (It was part of what he later referred to as “normal timeline maintenance.” He’d left some materials up longer than usual because they were linked to by other people, he said Tuesday, but “this time I just cleared everything out.”)

Vice mayor Alanna Mallon responded strongly to their testimony Monday, saying in discussion of the broader order that she’d heard “real pain” in the voices of commenters such as Schmidt and Crowe, and from “a lot of new voices, I thought, calling in and talking about how they wanted to be involved in their community.”

When the late order came around, she affirmed that there shouldn’t be bullying in “spaces that are designed to promote participation and civic life.”

In the incident, then ECPT board member Chris Matthews commented Oct. 18 on a group email list in a way many people found offensive. The comment came in reaction to a Cambridge Chronicle essay by Crowe, and said “that ‘help’ from outside our neighborhood has not been welcomed over the years, in fact it has been seen as interference from people that have broader political axes to grind.” But he went off-topic to refer to Crowe’s Etsy store, which sells men’s underwear, jocks and harnesses, inviting Crowe mockingly to share the site “along with an explanation of why we have to listen to an extreme libertarian recommending that we take his views about East Cambridge seriously.”

In an aside, he made a comment to Crowe about his modeling of a product from the website.

A couple of hours later, shortly before 11 p.m. a member of the group email list, Dan Eisner, said he’d been stewing about Matthews’ comment, an example of “appalling queerphobia [that] is yet another reminder that self-professed progressives can be plenty intolerant.”

Levy’s apology, which he said was for himself, came just before 8 a.m. the next day.

Mallon said on Monday that she’d been shocked by the “lack of appropriate response” from the East Cambridge Planning Team board, which released an official letter Oct. 21 apologizing for the incident. She had emailed Hinds shortly before it was posted, saying the silence was “beyond disappointing and at this point speaks volumes,” according to a record of the exchange. Hinds explained that as an organization of volunteers with full-time jobs, “we have been working on a response as a board” to follow the apologies made by Levy and Matthews.

Nolan spoke to acknowledge that Matthews and the ECPT had apologized, despite some people saying they had not, and said she’d heard “real pain” from both sides of the bruising development fights of the past years. “Many people have been left out of conversations or have felt bullied themselves in a variety of ways,” she said.

But Mallon said she was taken by surprise again at a new letter sent to councillors by Hinds, dated Monday, that included “falsehoods [that] none of the councillors had reached out to ECPT about this issue before we put this policy of order in,” ignoring the “lovely email conversation” they’d had last month.

That wasn’t quite accurate – what Hinds wrote was that “not one city councillor contacted us to ask what happened; you just took the word of someone who has publicly wished us ill for almost two years” – and Mallon didn’t mention something else Hinds told her in their exchange of emails: “No one knew Loren was gay,” Hinds said. “If Chris knew Loren was gay, I am sure he wouldn’t have made that remark.”