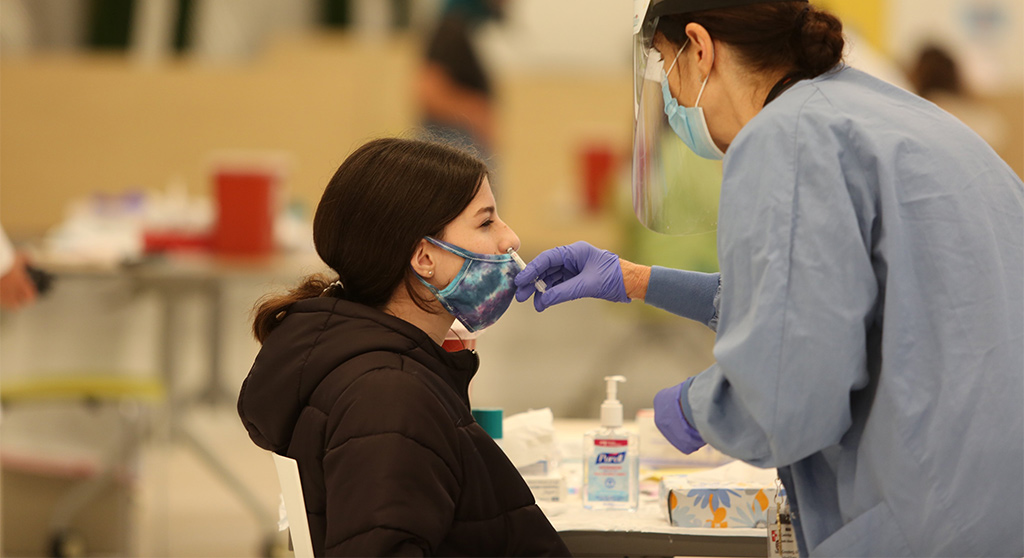 An ongoing push to administer flu vaccines is being treated as a dry run for Covid-19 vaccinations next year, a Cambridge health official told city councillors. (Photo: Cambridge Public Health Department via Twitter)

While officials have resisted calls from some city councillors to shut down indoor dining at restaurants to stem rising transmission of Covid-19, the city’s own scientific experts voted last month in favor of the move. Neither the public nor the councillors knew about the decision because the city did not release minutes of the Nov. 12 meeting of its Expert Advisory Panel – and three other panel sessions in November – until Tuesday.

The panel has also since discussed Covid-19 vaccine distribution, with an eye on starting early next year. Addressing Cambridge Health Alliance plans applying to its employees and patients, not to the general public, Dr. Lou Ann Bruno-Murtha, infectious disease chief at Cambridge Health Alliance, said Nov. 19 that information from the state suggested that a Pfizer vaccine, which requires super-cold storage, would go to big hospitals, while others would get a vaccine made by Moderna.

CHA expects to get the Moderna product but wouldn’t “go ahead and deliver it without seeing two months of safety data,” the notes said. “Thus, at a minimum not planning on giving the vaccine until February.” Hanage chimed in, saying he agreed with Bruno-Murtha “on safety” and adding that he was “hearing statements about efficacy with small study numbers,” the notes said.

After this article appeared, CHA spokesman David Cecere said Friday by email that “a lot has changed” since the November meeting. He cited “new plans from the state” for vaccine distribution, including earlier delivery, and  said that “clarity on when the two months of safety data will be available.” The safety information from vaccine trials will be made public next week, he said.

“While this is a rapidly evolving situation, it is increasingly likely that vaccination for frontline health care workers will commence before the end of this year,” Cecere said.  He didn’t explain why the Alliance will accept two months of safety data from Phase 3 of the trials, which was submitted to the U.S. Food and Drug Administration when life sciences companies Moderna and Pfizer applied for emergency approval last month, while Bruno-Murtha apparently wanted safety information from a larger group that will get the vaccine after it’s distributed more widely starting this month. Cecere said the health care system won’t go ahead with vaccination until the vaccines are approved by relevant federal agencies, including the FDA, Centers for Disease Control and Prevention and the Advisory Committee on Immunization Practices.

Vaccines for the general public

As for the city’s plans to immunize the public, a current blitz of flu vaccinations is being treated as a dry run for that effort, chief public health officer Claude Jacob said Monday.  “We’ll see where we are next year when the Covid vaccine is made available,” Jacob told councillors. “This is really to test out some modalities so that we’re better prepared and in position for Covid vaccinations at some point in the future.”

Meanwhile the spread of the coronavirus has worsened. There have been 110 new cases reported since Monday, with 42 on Thursday alone. Thursday’s total included one infection in an unnamed long-term care facility, the first since Oct. 28. During the past week, 4.6 percent of residents who got a PCR test – the most common test – were positive, along with  8 percent of those with an antibody test, and 14.3 percent who received antigen tests, according to the Cambridge Public Health Department’s weekly testing report Thursday. Those positivity figures are far above the one usually quoted by health officials, the percent of positive tests rather than positive individuals: only 0.77 percent averaged over the past two weeks. 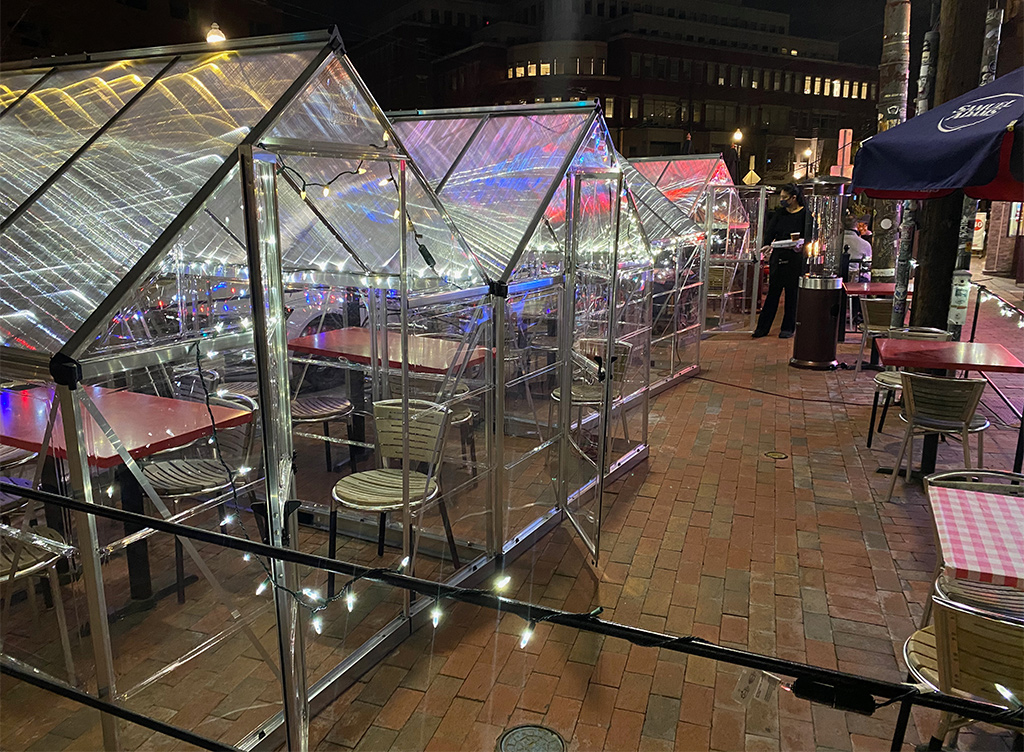 Restaurants such as Charlie’s Kitchen in Harvard Square are going to elaborate measure to keep customers dining outside in colder weather. (Photo: Marc Levy)

At the Nov. 12 meeting, the scientists made it clear they weren’t expecting immediate action on indoor dining, but were instead taking the vote to register their opinion. That included about shutting indoor fitness activities such as gyms, yoga and dance classes. Harvard T.H. Chan School of Public Health epidemiologist William Hanage said the “consensus statement is that some action needs to be taken on these sectors, beginning with communication indicating likely closure in near term and efforts to assist these businesses in any way feasible.”

It’s not known whether that happened. On Monday, the City Council voted to ask the city to provide air filters to restaurants to help them keep offering indoor dining safely. City Manager Louis A. DePasquale suggested the city might reduce dining hours as a “next step” short of closings, and his assistant for community affairs, Matt Nelson, said the Small Business Advisory Committee was considering making stronger efforts to persuade customers to keep their masks on except when eating.

There were other surprises besides the indoor dining vote in the newly released minutes of the Expert Advisory Panel. On Monday, councillors were told the city didn’t want to release results of a sewage testing project that had been in the works for weeks because “we want to have a candid conversation” with the expert panel first.

There was such a conversation Nov. 19. The health department’s environment director, Sam Lipson, said the “second round of data” showed a “wild swing” from the first to second week, according to minutes of the meeting. “Data looks seven times higher – questions about whether they’ve gone through corrective steps – can it be shared publicly?” the notes of the meeting said.

Hanage said the “uncertainty is the problem” with using local sewage data rather than results from a larger region to decide whether to close schools, as is planned. Changes could occur merely because Biobot, the company that analyzes the sewage samples, has “gotten better at extracting virus from sewage,” he said.

Besides the problem of interpreting the data, the city needs “information from Biobot on geographic areas” covered by the city’s four collection sites “before it can be released publicly, the Nov. 19 notes said, citing public health department chief epidemiologist Anna Kaplan.