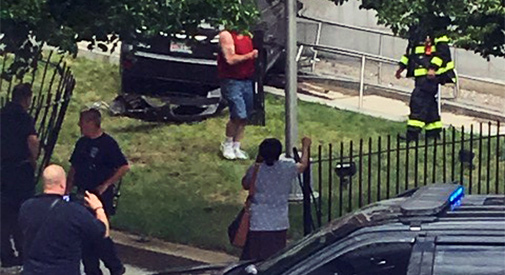 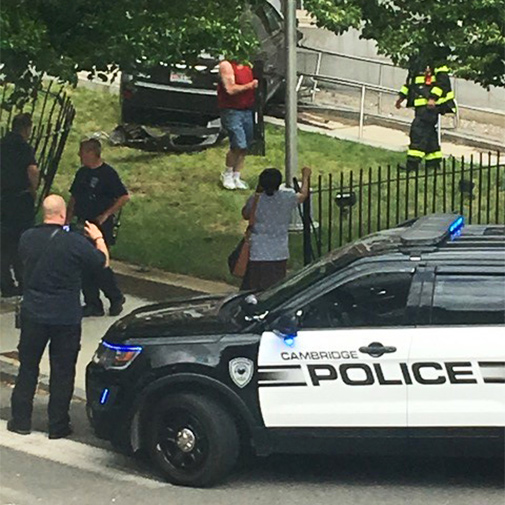 The aftermath of a July 2018 collision in which a car jumped the sidewalk and was stopped from hitting the courthouse by a handicapped ramp. (Photo: East Cambridge Planning Team)

The East Cambridge Planning Team has a virtual community meeting planned for 7 p.m. Wednesday. Along with a crime update and general Q&A with Cambridge police Sgt. William Macedo, there are two larger topics:

A traffic safety roundtable including collision statistics and safety updates with Lt. Rick Riley, commander of the Cambridge police traffic unit, and Joseph Barr, director of the city’s Traffic, Parking & Transportation Department. Team president Chuck Hinds said he has asked for analysis of the impact of a four-way stop installed last year at Spring and Third streets after much lobbying; the intersection, a problem for some 20 years, sometimes saw collisions every two weeks, Hinds said.

A One Main St. and 101 Main St. project to replace an existing, low-slung parking structure between the buildings – which run parallel to Broad Canal in Kendall Square – with the opposite: A structure with up to 450,000 square feet of office space above where the garage is now, with the garage demolished to become a passageway for people to get to and from the water. The proposal for infill (part of a whole Broad Canal Subdistrict) and public benefits will be presented by Larry Beals, president of Beals Associates.

The meeting is at 7 p.m. Wednesday on CCTV Channel 9 and watchable by Zoom. Email Hinds for access.