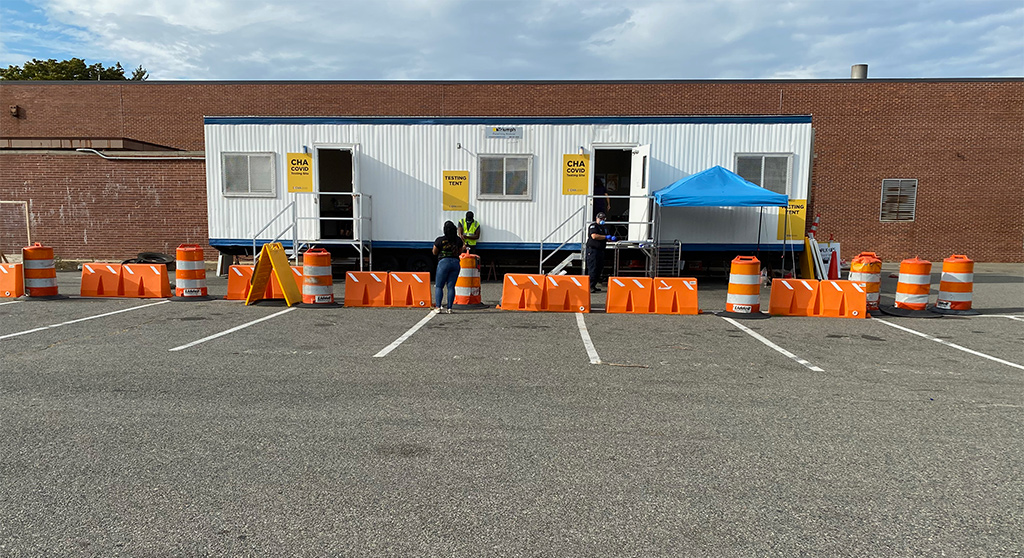 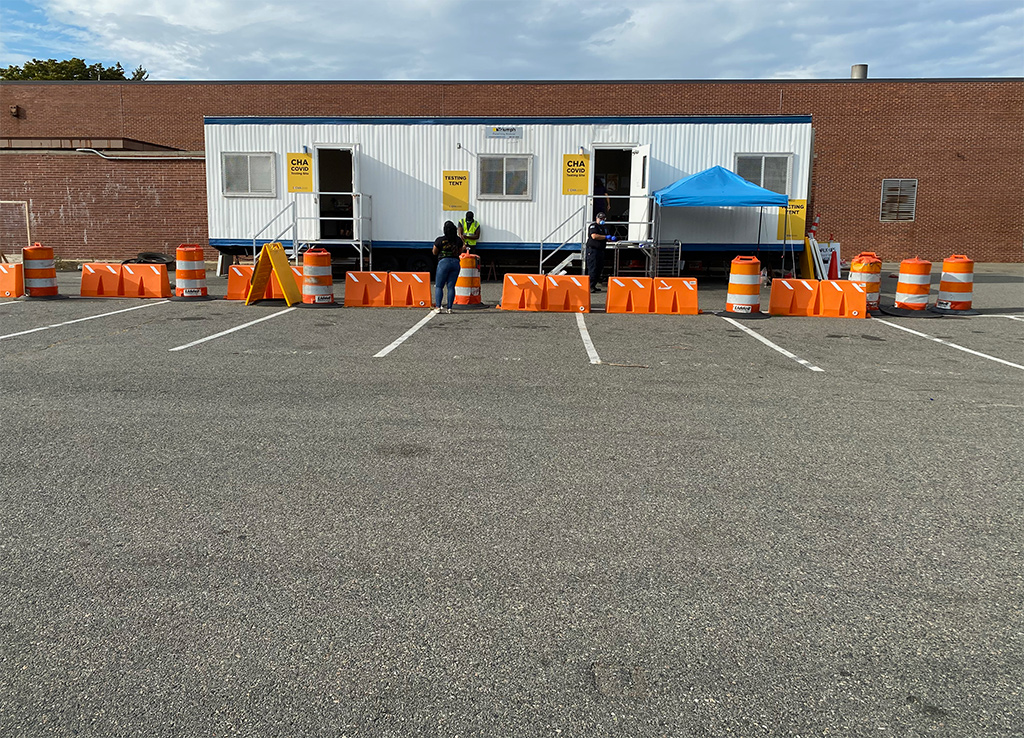 A coronavirus testing station was set up in late summer by Cambridge Health Alliance at Assembly Square in Somerville. (Photo: Marc Levy)

Two more residents have died of Covid-19, bringing the total during the pandemic to 102 deaths, the city reported Wednesday. It was the first increase in deaths since Sept. 25, when the toll rose to 100 from 99.

The Cambridge Public Health Department also reported that another long-term care resident tested positive for Covid-19. The total number of infections is now 277. The department has refused to identify any nursing home or assisted living center where residents or employees are infected.

There was no immediate comment from city or health officials on the deaths and the long-term care case.

They came as the total number of Covid-19 cases increased by 19, a relatively low number compared with the previous three days, when daily cases ranged from 36 to 42. Although people in their teens and 20s still account for most new cases, infections are starting to increase in older residents. Since Dec. 9, there have been 25 new cases among residents in their 60s; 10 infections among those in their 70s; and eight in the oldest category, 80 and above. Experts had predicted that the flood of young people with the virus might not get sick enough to stress hospitals but would eventually spread Covid-19 to older people who are more at risk from the virus.

The number of people in the hospital has been rising statewide. As of Wednesday, only 13 percent of hospital beds outside intensive care units were available in the Metro West region, which includes Cambridge. ICU units in the region were 75 percent full, the state health department reported.

Notes of the Dec. 10 meeting of the city’s Expert Advisory Panel said intensive care units were full at both Cambridge Health Alliance hospitals, in Cambridge and Everett. Alliance spokesman David Cecere said Monday there were five Covid-19 patients in the ICU; he did not answer a question about what intensive care capacity remained.

Another question that remains unanswered is how the health department is responding to a sharp increase in the rate of infection in Hispanic residents. Early in the pandemic, chief public health officer Claude Jacob turned a spotlight on racial disparity in the impact of the virus, reporting that the infection rate in black residents was three times that of white residents. At that time, Hispanic residents also had a higher infection rate than white residents – number of cases per 10,000 population of that ethnic group – but it was less pronounced than the black/white disparity.

The city’s daily Covid-19 dashboard has bar graphs showing the infection rate among Asians, whites, blacks and Latinos. The Latino rate has shot up in recent weeks and surpassed the rate for black residents on Tuesday and Wednesday. Susan Feinberg, spokeswoman for the health department, hasn’t responded to repeated questions about what the department is doing to reduce the rate among Hispanic residents.

In response to pressure from councillor E. Denise Simmons, the department located a free Covid-19 testing site at the Pisani Center, in the middle of two public housing developments in The Port, and last week young people in the Cambridge Community Corps visited both developments door-to-door to urge residents to get tested. The health department also set aside time Dec. 12 when those residents could get tested without an appointment.

A similar program will take place this week for public housing residents in North Cambridge; they will also be invited to a special testing session without making an appointment. That came at the request of Mayor Sumbul Siddiqui, who grew up in low-income housing in North Cambridge.

The Wellington-Harrington neighborhood has the highest percentage of Latino residents among Cambridge neighborhoods – 13.1 percent – according to the city’s Community Development Department. It also has a large public housing development. The health department hasn’t announced a program in Wellington-Harrington that’s similar to the ones in The Port and North Cambridge.

In recent days, Wellington-Harrington’s infection rate has topped all other neighborhoods, the city’s dashboard shows. But a large number of cases don’t have the kind of location information that enables city employees to assign them to a neighborhood, so a comparison may not be valid.