‘Limbo’: Waiting for their new lives to start, immigrants to a land drenched in the droll 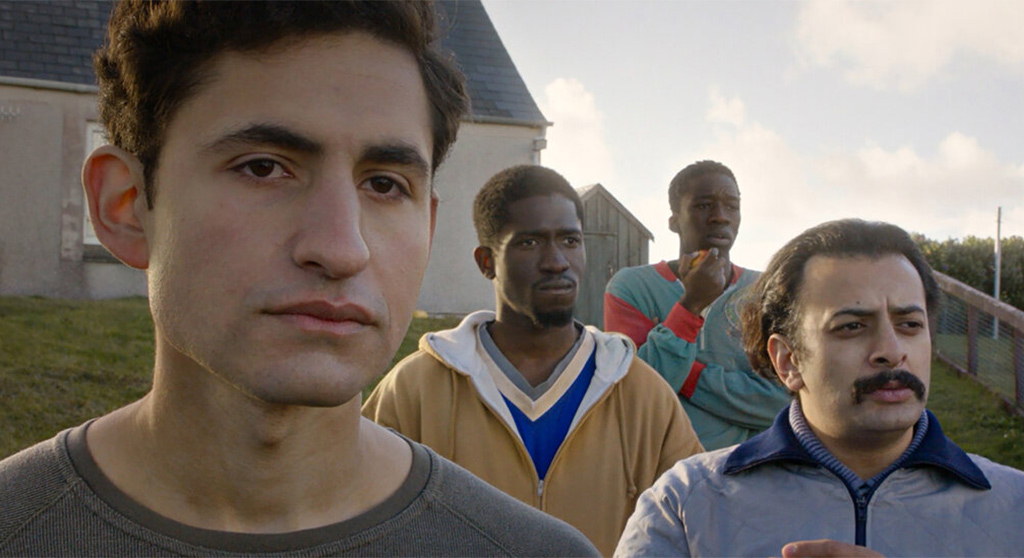 ‘Limbo’: Waiting for their new lives to start, immigrants to a land drenched in the droll

Before he got behind the lens of a camera, Ben Sharrock was a humanitarian aide in an Afghan refugee camp and also in Syria, which gives the writer/director plenty of real-life knowledge to put behind the story of refugees desperately seeking asylum from western counties. That in-between – the not knowing if you’re going back to a war-torn hellhole or about to begin a promising new life – is the situational sweet spot that Sharrock’s film embraces.

For such a serious subject matter, “Limbo” is remarkably droll and witty. The drama unfolds on a fictional Scottish island where young men from Afghanistan, Syria and several African nations attend acclimation classes in a one-room schoolhouse. The adult education leaders (Kenneth Collard as Boris and Sidse Babett Knudsen as Helga) have the devilishly pleasing tang of Benny Hill to them. The main protagonist, Omar (Amir El-Masry), newly arrived from Syria with little but his grandfather’s oud – a zither-like Middle Eastern string instrument – has dreams of making it as a performer. In fact, the whole mini-community is a colony of dreamers; several state  their goal to become star futbol players, as Boris and Helga nod politely and continue on with trainings on how to conduct a phone query for cleaning jobs.

The island itself plays a pivotal role: There’s no cellphone reception (old school pay phones substitute) and the rock is so remote it’s often sealed off by gales and sleet storms – the framing of which by Nick Cooke gives the island a fairy tale wonderment. It’s a more rapturous capturing of Mother Nature and wide vistas than Joshua James Richards’ impressive work in “Nomadland.”

Overall, “Limbo” bristles with an existential posturing that never quite goes deep enough for it to pay off. Omar’s airy dreams and past situation (the flashbacks to Syria pull you out some) are counterbalanced with absurdist black comedy. It doesn’t always gel, but it does intrigue, and Sharrock and crew are best when pushing tropes. Omar’s flatmate Farhad (Vikash Bhai), an Afghan expat and lover of all things Freddie Mercury, sports the telltale mustache of his musical idol. They even name chicken after the Queen frontman, and for entertainment watch episode of “Friends” off DVDs. They live a mashup of cultural cross threading, with unknown futures.