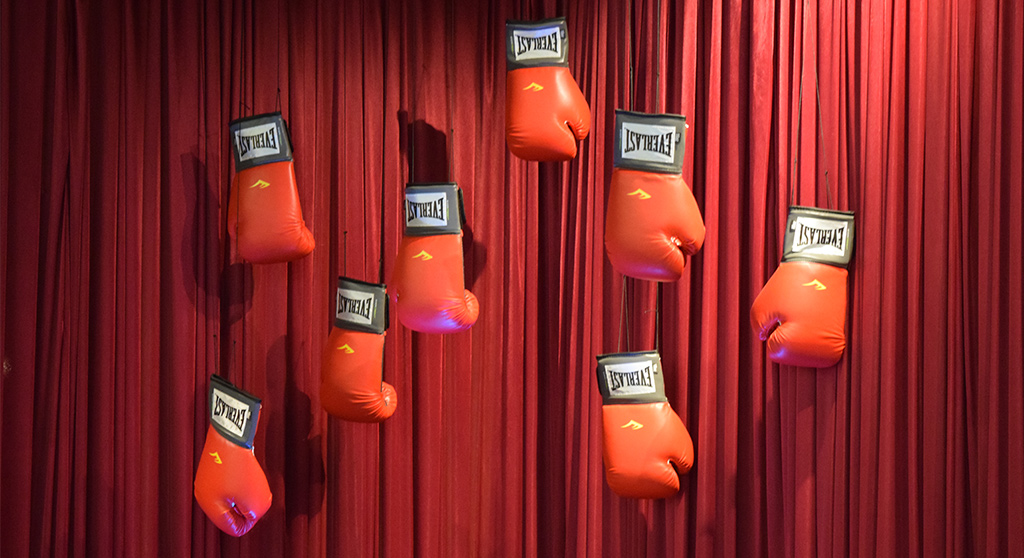 The phenomenon “Go Pixel Yourself” at CambridgeSide ushers patrons through a maze of immersive exhibition rooms with diorama-like staging of futuristic furniture in front of incredible digital displays. The one-of-a-kind, 9 million-pixel experience – described as a “selfie museum” – was designed by John Carter, artist and creative director of Parker 3D, a New Jersey firm that specializes in lighting, store windows and interactive exhibits.

There’s really no need to turn this mall experience into a social media event. It’s fun to simply drift through and feel delighted by the sights and technical wonders. But if you do indeed want to “pixel yourself,” the exhibit makes it easy. Here are photos and rankings of each room so you can decide which to visit. They’re ranked from least to most impressive.

Hourlong visits to Go Pixel Yourself run between 11 a.m. and 8:30 p.m. Fridays, Saturdays and Sundays on the second level of  CambridgeSide, 100 CambridgeSide Place, East Cambridge. Tickets are $30 for people 10 and older or $15 for children starting at age 3. 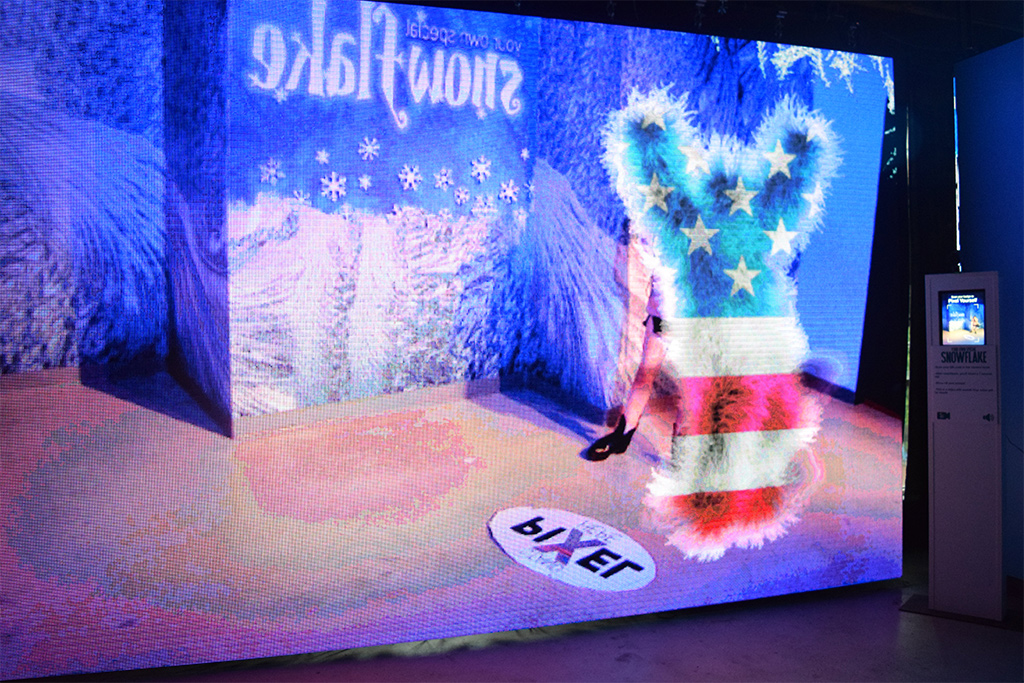 A fuzzy digital being – “your own special snowflake” – dances with you on a shared virtual stage. It’s cute, but the graphics fall a little flat compared with other, more mesmerizing rooms. 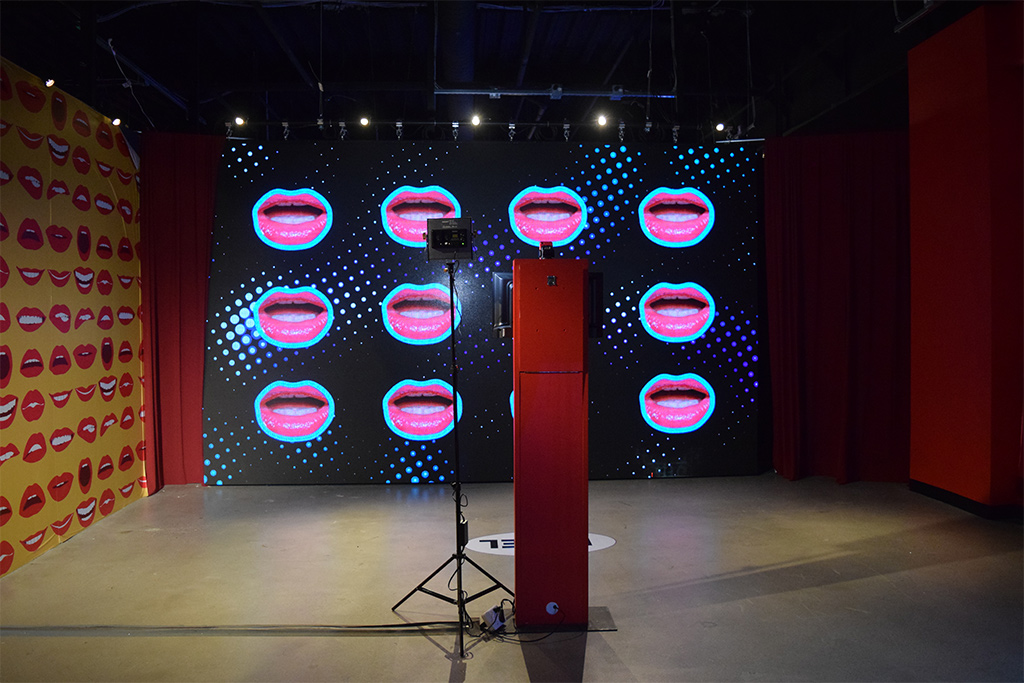 This room is dominated by a wall of expressive lips forming themselves in grins, pouts and kisses. But it won’t make you smile as much as  the ridiculously large mouth you’ll encounter when you find the Event Room. 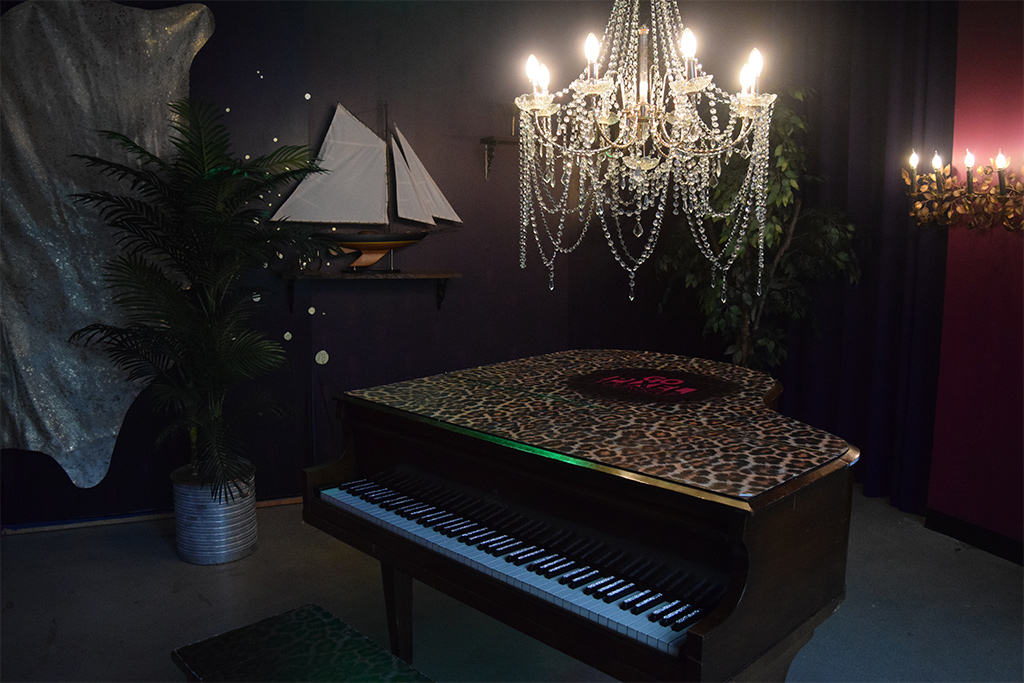 An attempt at opulence that pales in comparison with the Bling Room down the road. The décor here is a little scattered; the glittery-keyed, cheetah print piano doesn’t quite complement the ship model on the wall. Still, two chandeliers – albeit mismatched – are better than one. 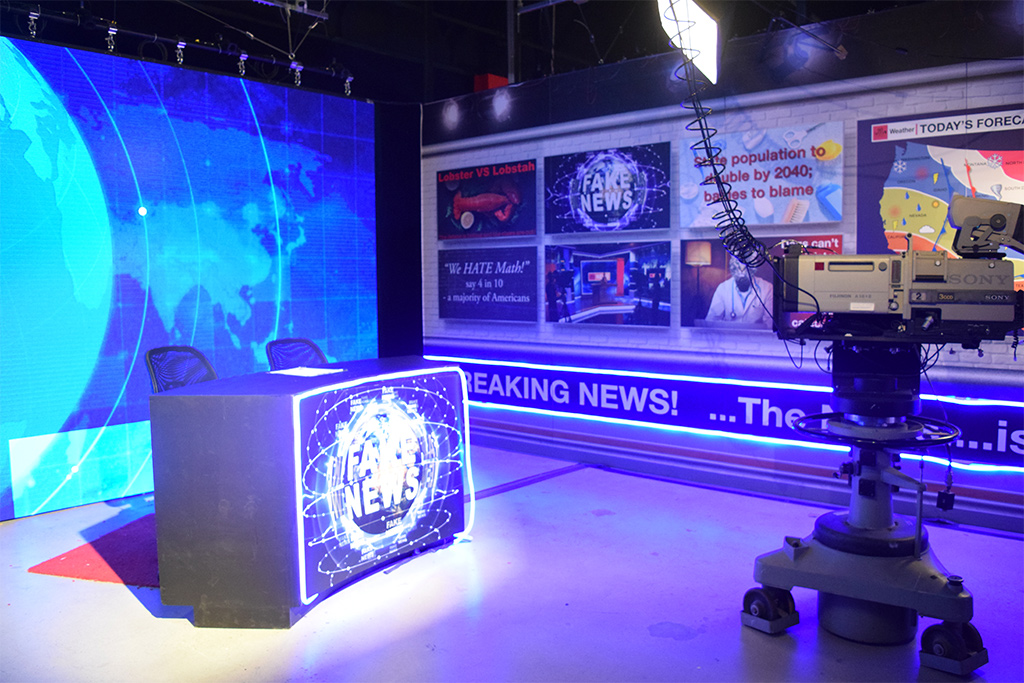 In this mock studio, you sit behind an anchor desk splashed with the words “fake news.” The invocation of this socially consequential term is an odd reminder of the outside world when the point of venturing into this experience is – presumably – to forget about all it. The absurdism of the real world and the absurdism of this interior space are of two different flavors, and they make for a strange mix. 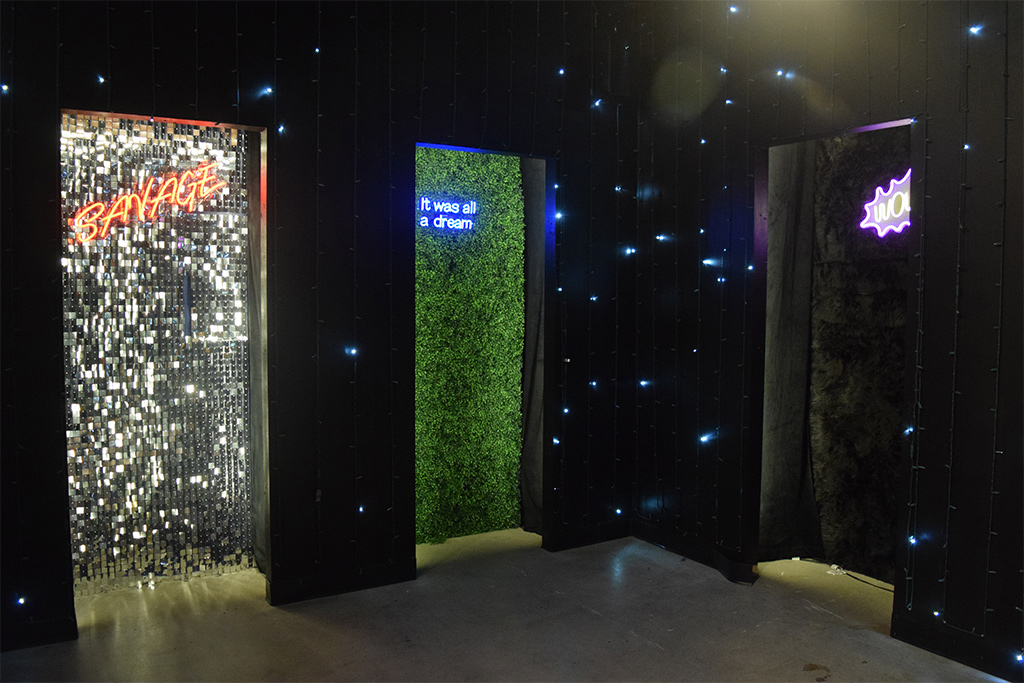 Lined with bright portals set deep into dark walls, this room suspends you between paths to different worlds. In one of the portals hangs a blue neon sign that says “It was all a dream” – a pretty decent synopsis of the whole “Go Pixel Yourself” experience. 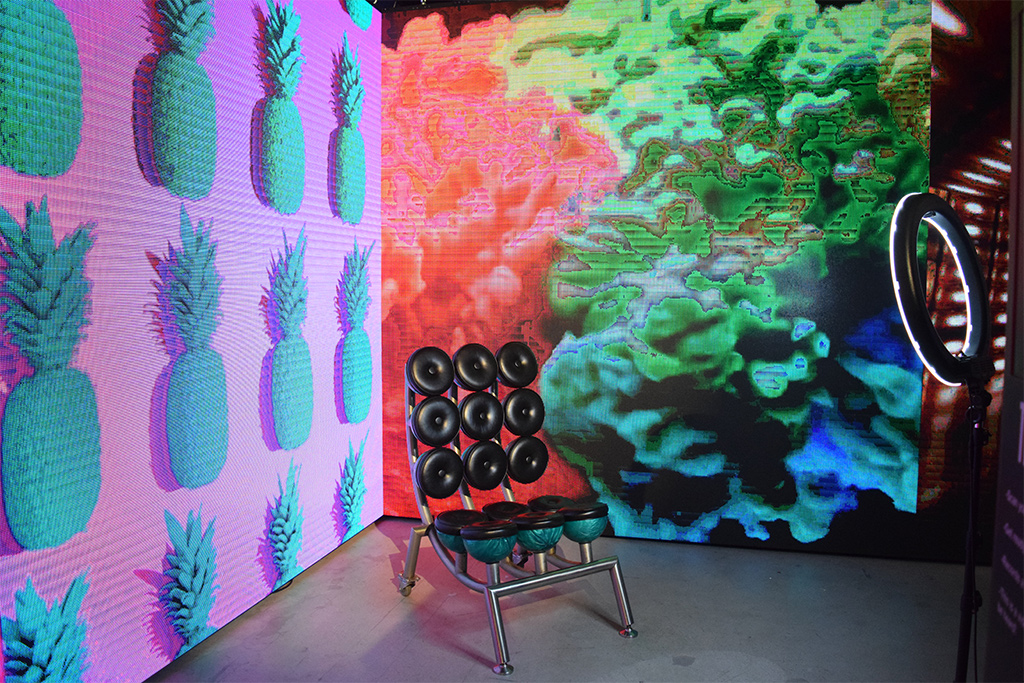 Thematically ambiguous. Carter made this chair out of bowling balls, and you can lounge in it as colorful pineapples dance on the walls. Where the nominal “travel” theme comes in isn’t totally clear, but the room certainly takes you on a trip. 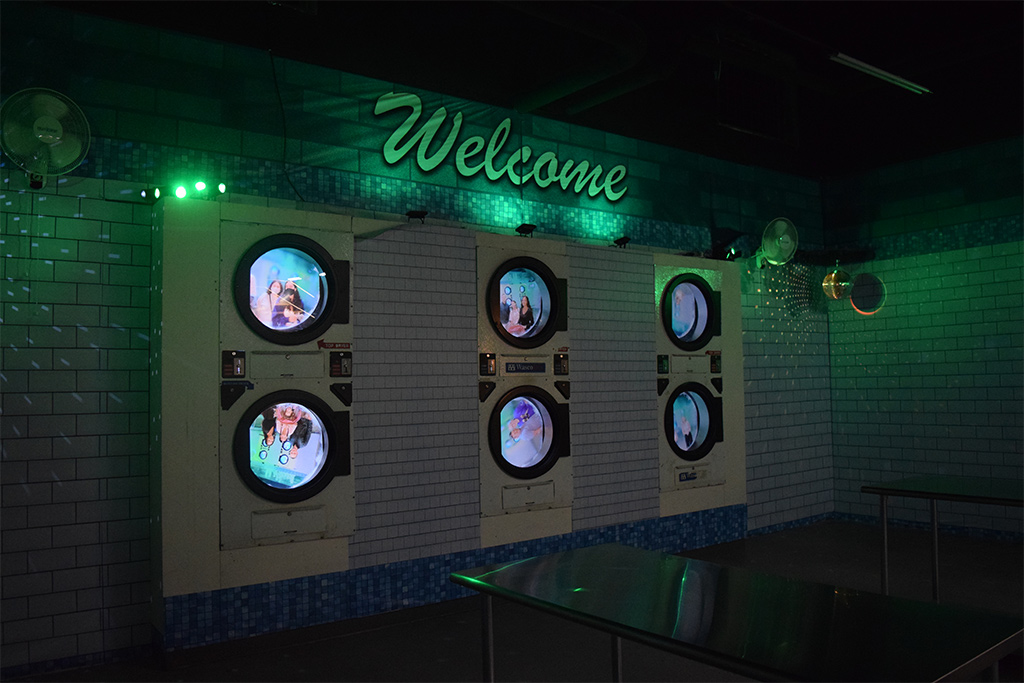 In this cool-toned laundromat with a dim disco feel, you watch your own likeness tumble around in rows of washers and dryers. Dizzyingly cool. 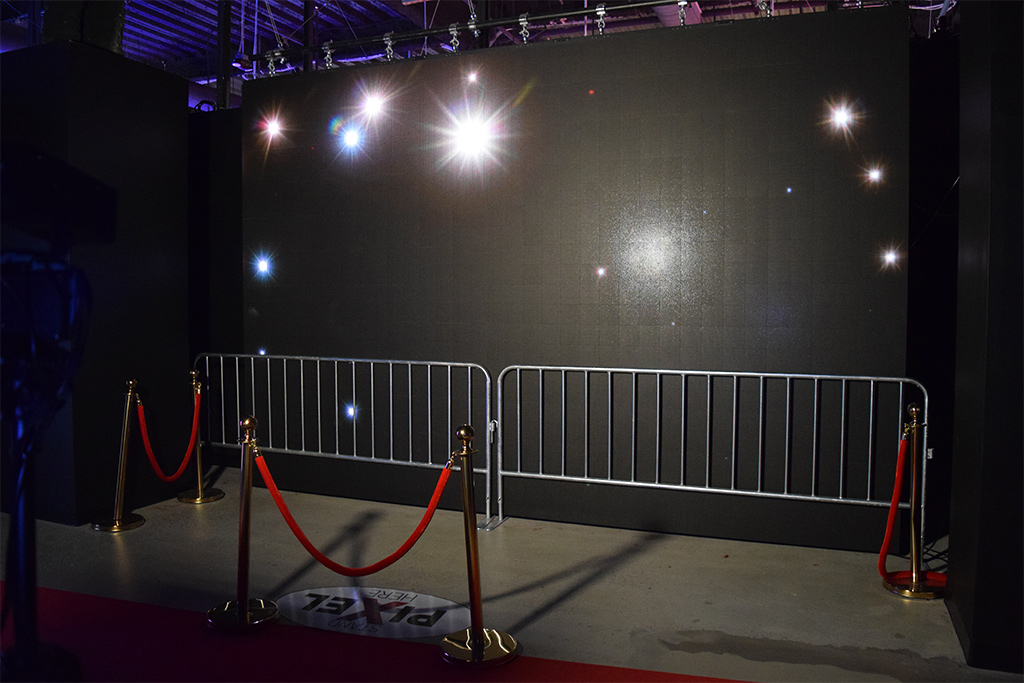 From behind velvet ropes on the red carpet, you gaze at a starry night of camera flashes while your invisible audience offers up thunderous applause. The ratio of noise to visual impact is a bit off; you might find yourself covering your ears and ducking out of the limelight after a minute or so. 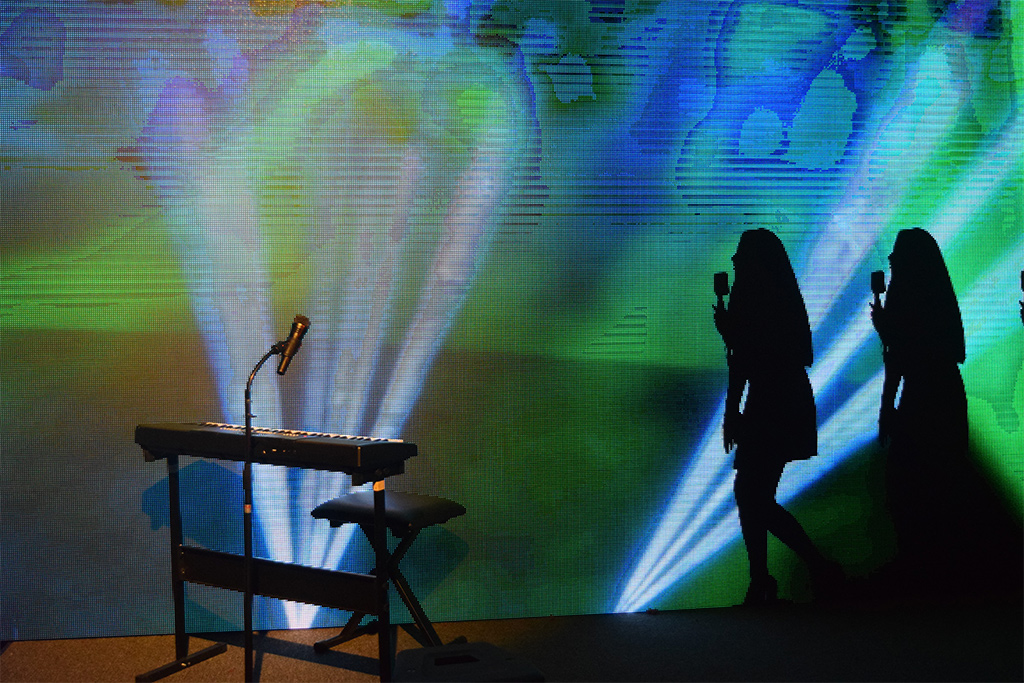 You jam on stage backed by silhouetted dancers and a psychedelic light show. It’s probably extra fun if you can actually sing or play the keyboard. 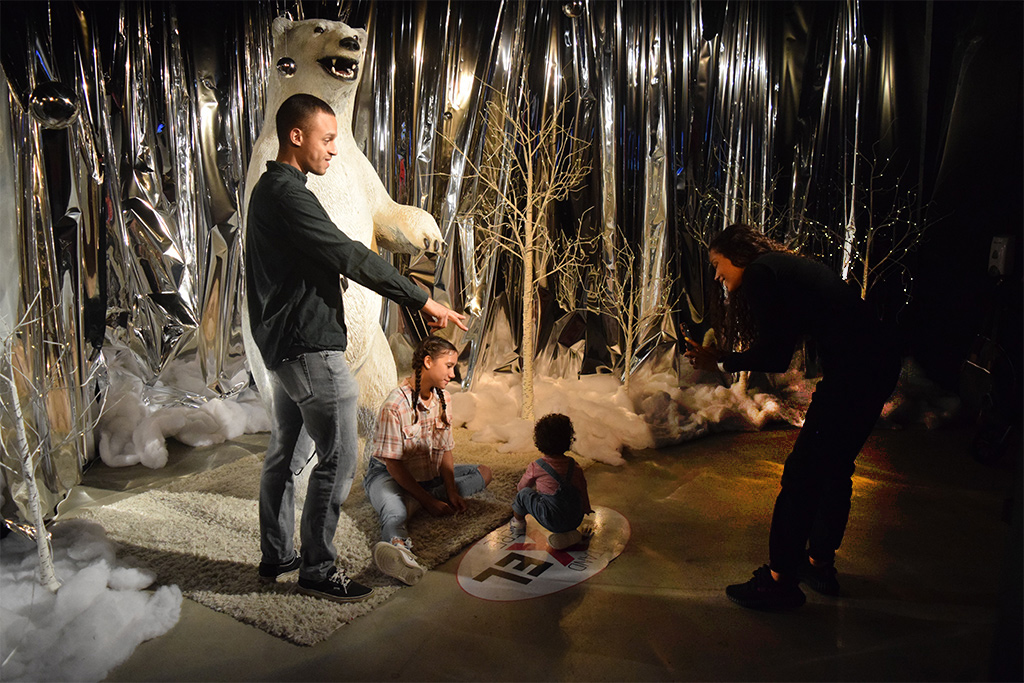 This room is a little kitschy with its towering polar bear, glittering silver foil and piles of fluff in lieu of snow. But the vibe is cozy enough to keep you warm, even in an arctic simulation. 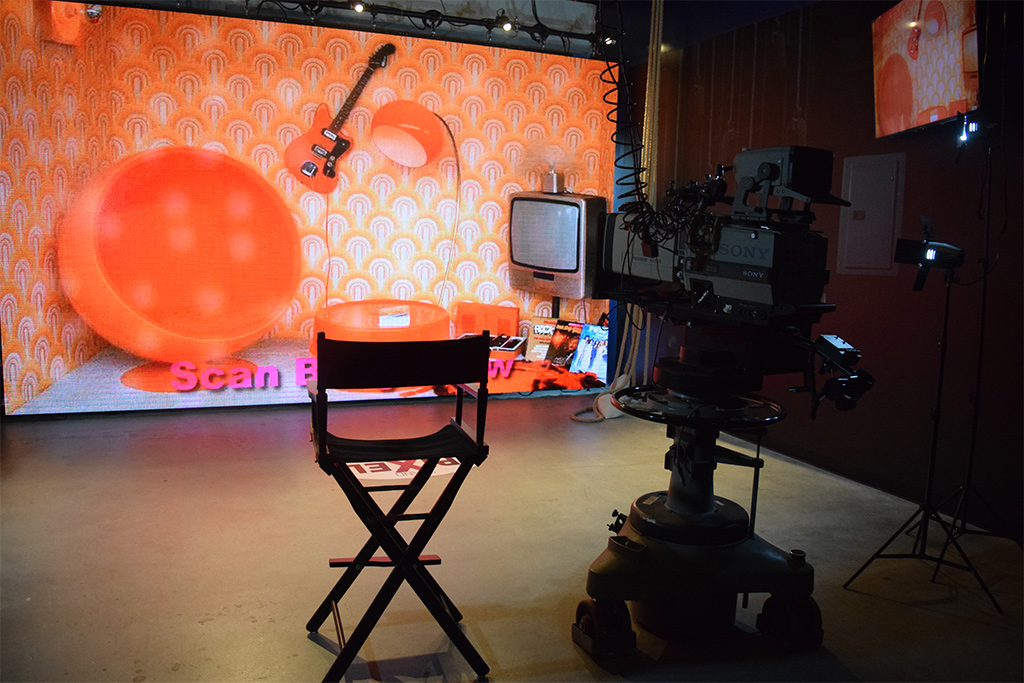 The best seat in the house: the director’s chair. In this perch, side-by-side with a legitimate film camera, you can watch your friends perform in front of bright, dynamic backdrops, their likenesses doubled on a TV screen. 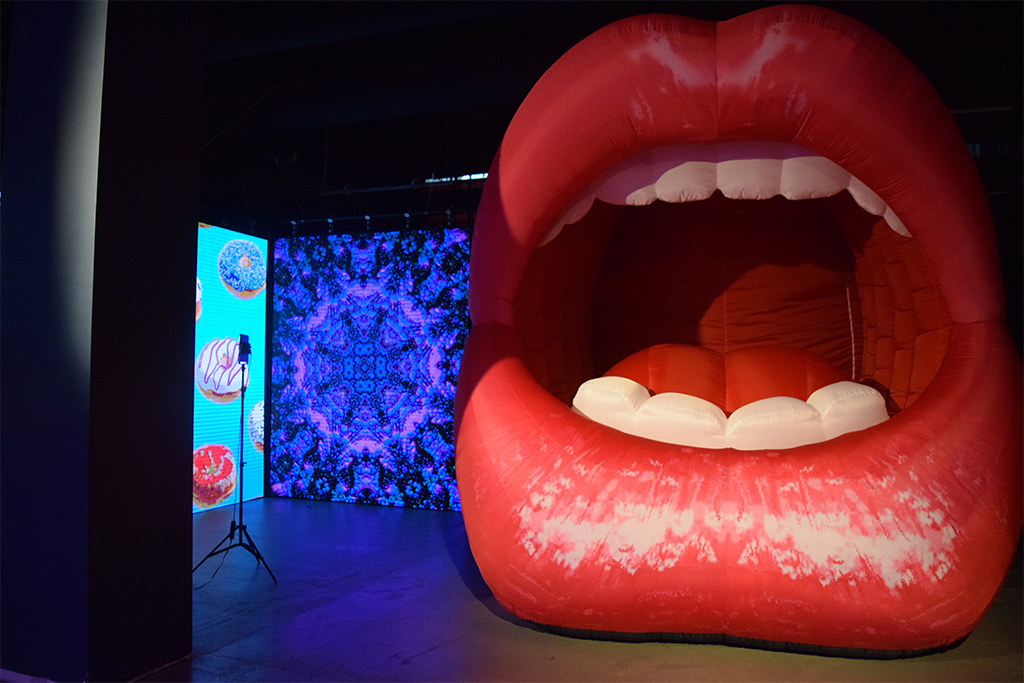 This jaw-dropping room features an enormous, inflatable mouth that resembles a bouncy house. Alas, you’re not allowed to climb inside. Looking is still plenty fun, especially when it makes you feel like you’ve been shrunk down to a few centimeters Alice-in-Wonderland style. On some nights, this space opens to those milling about the mall, who are invited to enjoy music from a DJ booth. 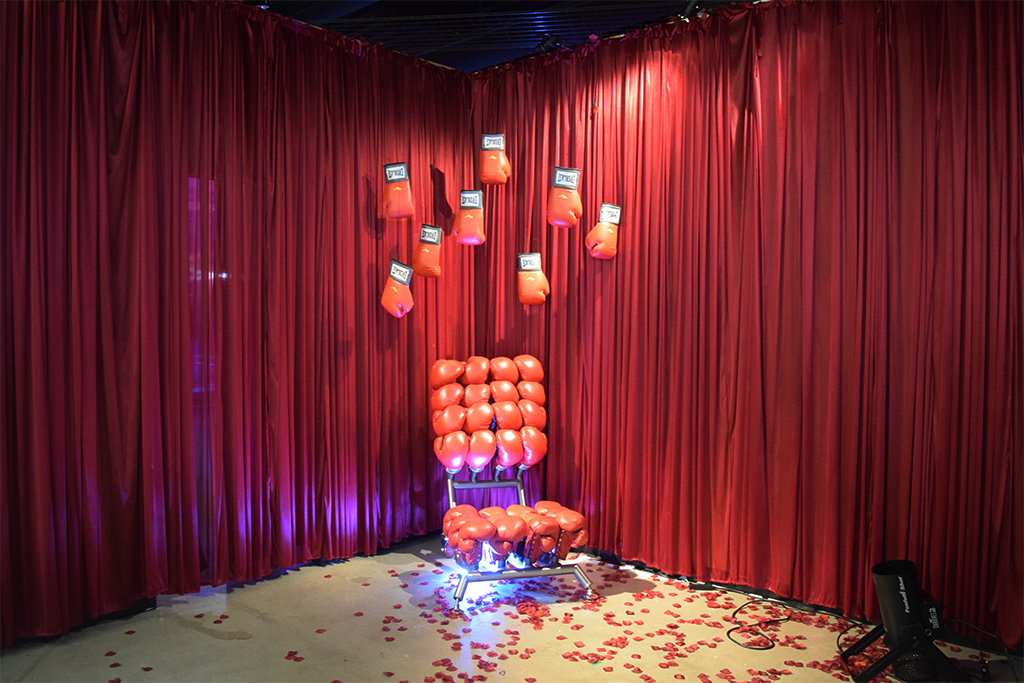 Behold another feat of furniture: This chair by Carter is built out of bright red boxing gloves and haloed by a shower of scarlet fists poised to pummel the sitter’s head. There’s also a cannon of rose petals. Packs a visual punch. 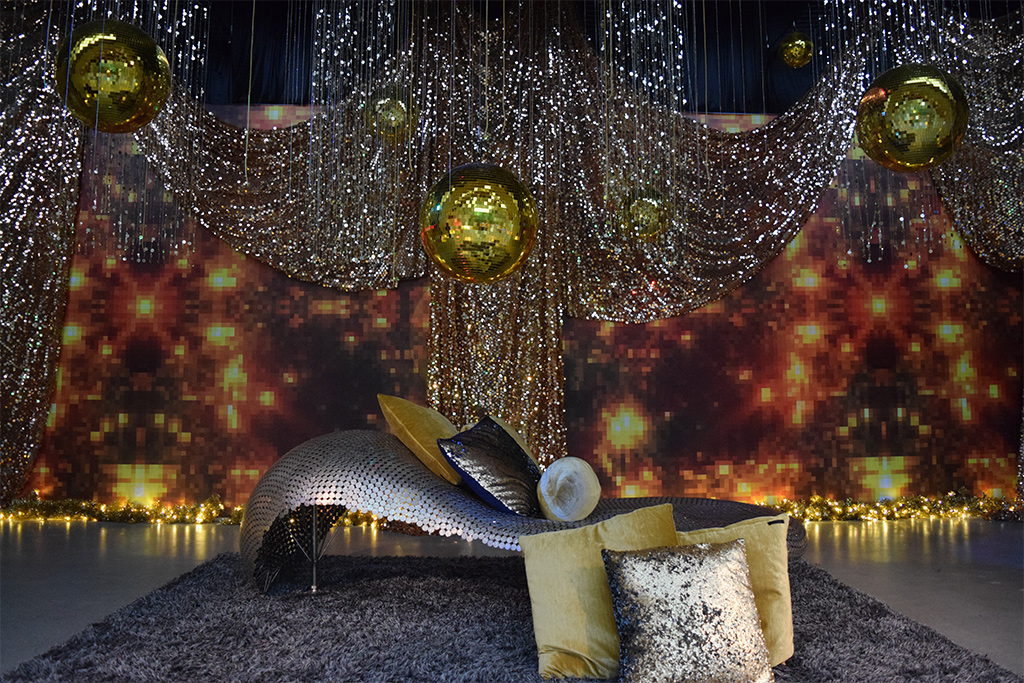 Every inch of this gorgeous lounge is dripping in silver and gold, but a slinky couch made entirely of quarters is the room’s richest feature. Valued at $120,000, this piece of furniture – the handiwork of designer Johnny Swing – is worth quite a bit more than spare change; surprisingly, you’re allowed to sit on it. The quarters, the abundant sequins, and the facets of the disco balls spinning above are a fun play on the texture of pixilation, blurring the line between real and digital space. 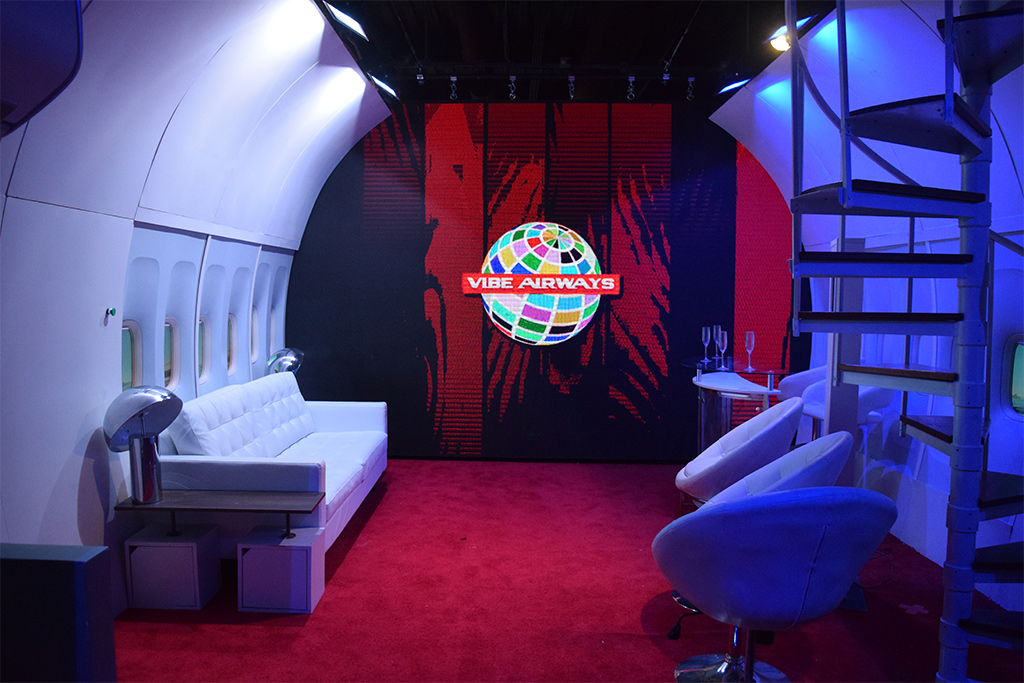 The exhibit’s most immersive space invites you to set off in a private jet with implausibly spotless seats, a sleek cocktail bar and in-flight entertainment created by none other than Beeple – the digital artist who sold an NFT of his work for $69 million a few months back. Sit back, relax and enjoy his kaleidoscope concoction on the big screen as Vibe Airways delivers you from the exhibit’s lesser rooms.