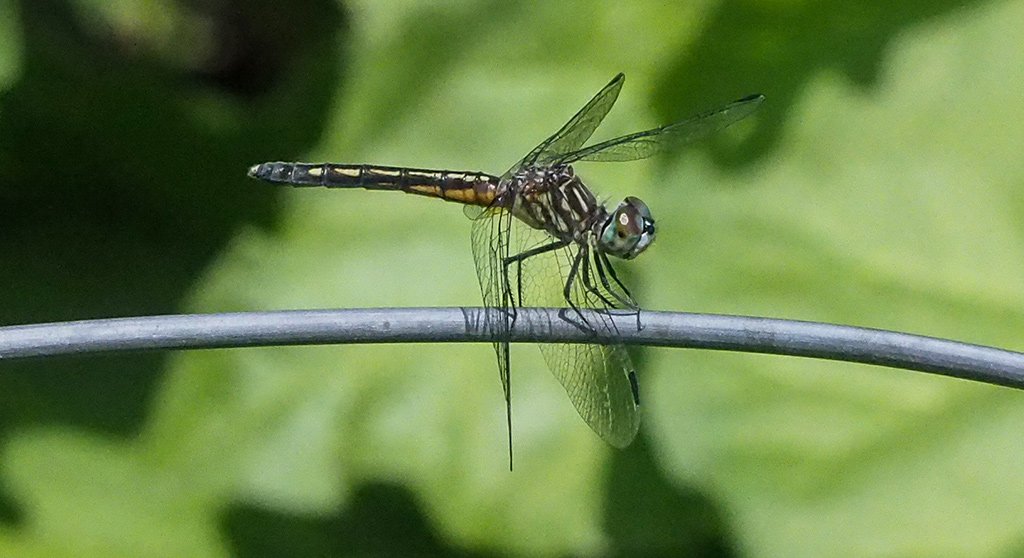 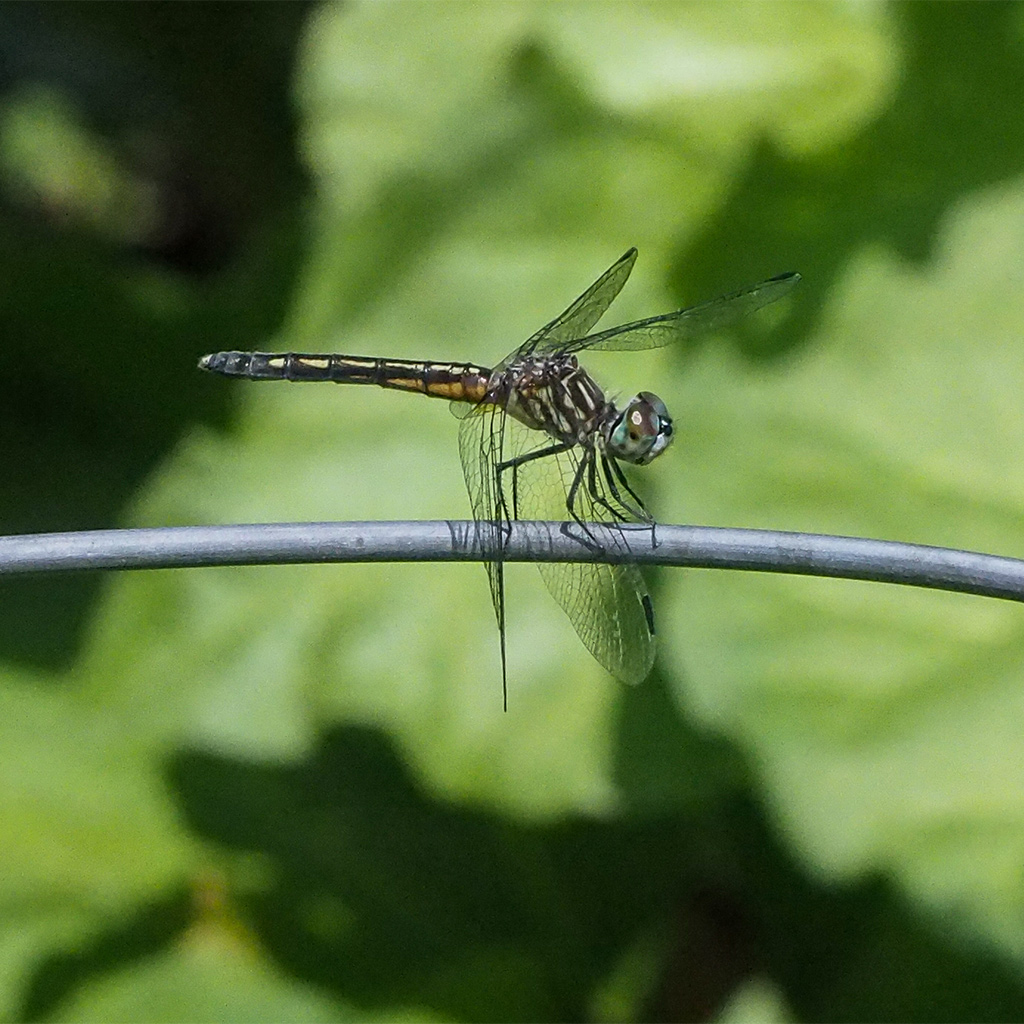 If you visit ponds or walk along slow-moving rivers, marshes or other wetlands in the summer, you have probably seen the blue dasher dragonfly (Pachydiplax longipennis) hovering or roosting at night in trees from the end of June until September. Among these most widely found dragonflies in North America, males are chalky blue with jade green eyes, while females have black-and-yellow striped abdomens. Females and juveniles can have red eyes.

Blue dashers, like all dragonflies, are carnivorous – and are mosquito-devouring machines. Adults are not picky and eat nearly any flying insect, consuming up to 10 percent of their body weight in food per day. That can mean eating hundreds of mosquitoes or other insects per day, often catching their prey in midair. 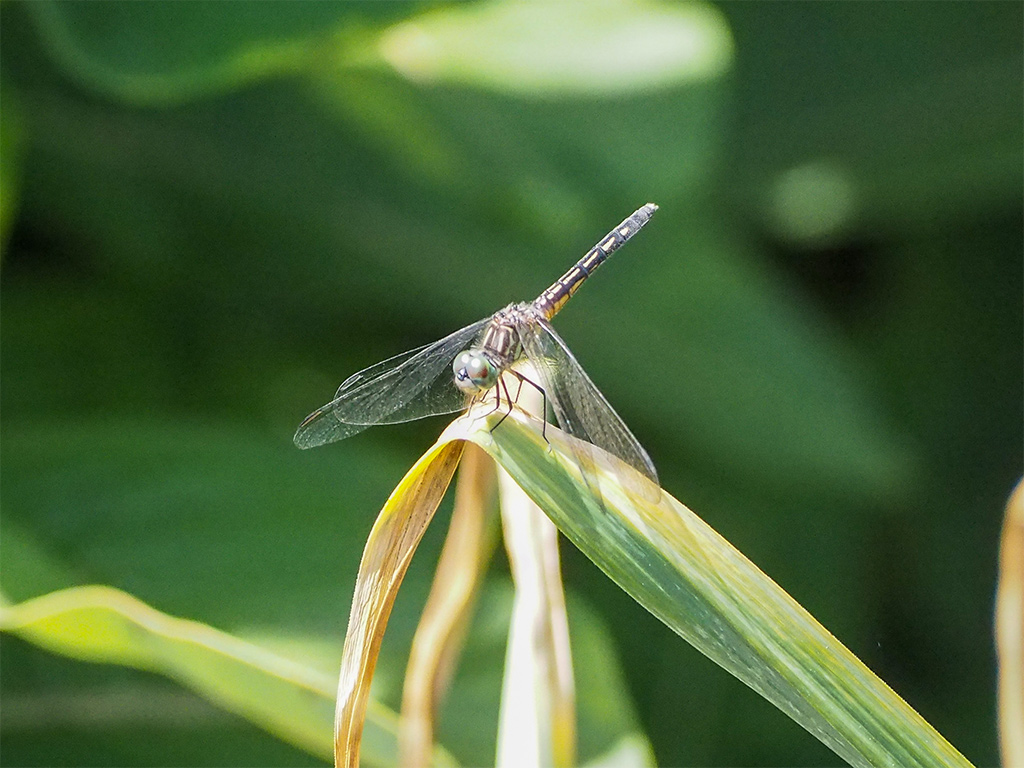 The female hovers above the water and dips the tip of her abdomen into the water’s surface to deposit up to 700 eggs. The male stands guard nearby. When the eggs hatch, the nymphs, or naiads, are voracious predators that eat almost anything smaller than they are, including mosquito larvae (a favorite), tiny fish or tadpoles. Blue dasher naiads live underwater for up to two years. During this time, they shed their exoskeletons six or more times. They breathe through gills in their gut, and they propel themselves by expelling water from the rear of their abdomen.

When a naiad is ready to metamorphose into an adult dragonfly, it swims to the surface at night. There, it lifts its head out of the water as its body adapts to breathing air, then climbs a plant stem out of the water, where its skin splits behind its head and the adult dragonfly emerges. The adult swallows air to plump up its body and pumps hemolymph, the bloodlike substance of insects, into its wings. 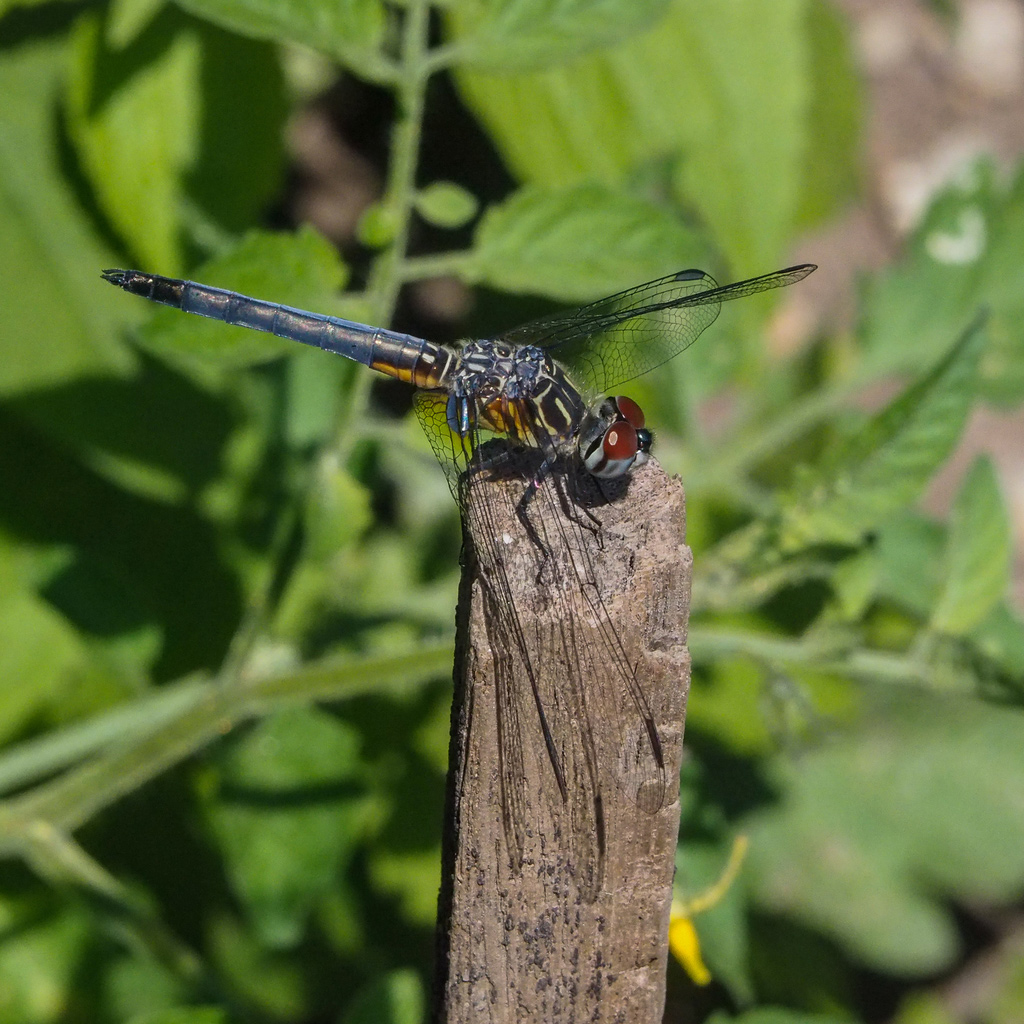 Dragonflies are agile and swift flyers with incredibly fast reflexes. Much of this has to do with their phenomenal eyesight. Their bulging, round compound eyes are composed of 30,000 facets, or photoreceptor cells called ommatidia. Each facet sees in only one direction, but the total number of facets allows the dragonfly to see in nearly all directions.

Each ommatidium contains light-sensitive proteins called opsins. Unlike humans, who have three opsins that allow us to see the colors of the rainbow – red, orange, yellow, green, blue, indigo and violet – dragonflies have four or five opsins and can see colors out of range for humans: The top portion of a dragonfly’s eye captures shorter wavelengths of light, such as ultraviolet, while the lower portion of the eye captures longer wavelengths, such as reds.

Dragonflies can detect light signals coming from all directions better than the best lenses on the best cameras today. It’s no wonder, then, that almost 80 percent of a dragonfly’s brain is dedicated to sight and that they process information faster than humans – about 200 images per second, compared with humans’ 60 images per second.

To watch a dragonfly catch a midge in midair, check out this amazing video.