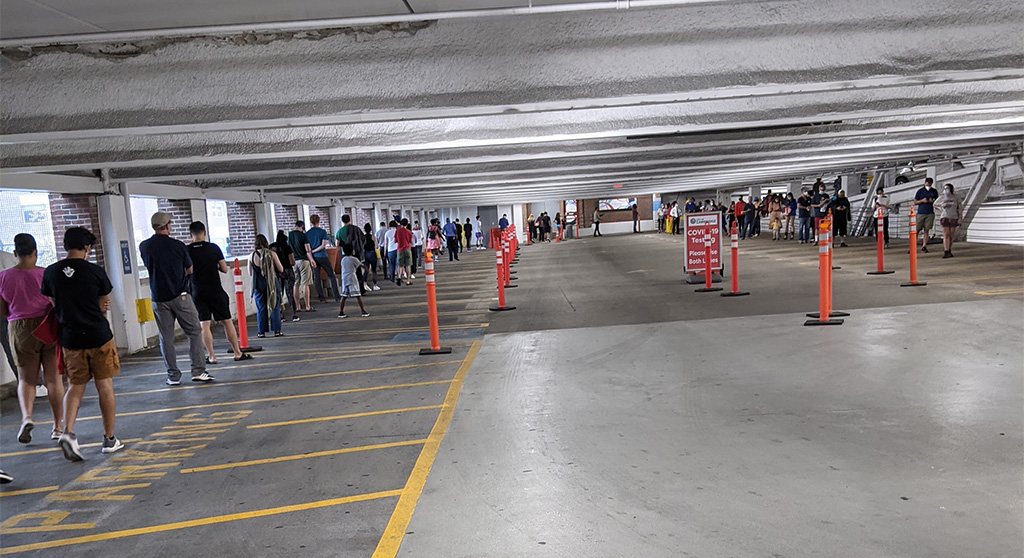 Hundreds line up Thursday for a Covid-19 test at the CambridgeSide mall in East Cambridge. (Photo: Sue Reinert)

With Covid-19 cases continuing to climb in Cambridge, most reportedly caused by the highly infectious delta variant, the city on Thursday mandated masks for employees and visitors in all city buildings starting Monday. The city had not imposed a mask requirement before despite a recommendation four weeks ago by its own health department that all residents regardless of vaccination status wear a mask when indoors except in their homes.

Residents showed heightened concern about the direction of the pandemic by flocking to city Covid-19 testing sites. Hundreds queued up Thursday in a line snaking through the parking garage at the CambridgeSide mall. Most waiting were young, with some family groups bringing their kids under 12, who can’t get vaccinated.

The city expanded its free testing program this month to three days a week: Sundays from 2 to 6 p.m. at 50 Church St., Harvard Square; Mondays from 4 to 8 p.m. at the CambridgeSide mall, 100 CambridgeSide Place, East Cambridge; and Thursdays from 11 a.m. to 3 p.m., also at CambridgeSide. No one needs an appointment, identification or insurance information, and results are usually available within 24 hours. The CambridgeSide site now offers walk-up tests; previously only drivers could be tested there. Harvard Square has always been walk-up.

Data from Cambridge sewage showed the city could be in for higher case counts: Coronavirus levels in wastewater collected from three spots that cover the city and part of Belmont have risen since July 27, the first increase in weeks, with the sharpest increase from the East Cambridge site. The virus level in wastewater can lag infections by several weeks.

Cambridge Public Health Department spokesperson Susan Feinberg couldn’t comment immediately on the wastewater data from Tuesday. She did say the health department believes that “the vast majority of new cases in Cambridge” are caused by the delta variant and offered more details – but when asked for the details, said she would be away from her office and referred questions to another health department manager.

That person did not respond, and she emailed the reporter Thursday that she no longer worked for the health department.

David Cecere, spokesperson for the Cambridge Health Alliance, which operates the health department for the city, was asked for an explanation Thursday. The story will be updated with his response.

CHA is seeking a replacement for chief public health officer Claude Jacob after Jacob left the job June 30 to head the health department in San Antonio. His departure was known as long ago as April 16. The Alliance hired an outside search firm, WittKieffer, to recruit Jacob’s replacement.

As cases rise, vaccinations of Cambridge residents have all but stalled. The latest figures, reported Thursday by the state Department of Public Health, showed that the proportion of residents fully vaccinated remained at 68 percent, the same figure from the previous week. Older teens from 16 to 19 years old, who have lagged every other age group in vaccinations, remained at 47 percent fully immunized. People in their 20s have the second-lowest vaccination rate, and they inched up to 64 percent fully vaccinated as of Thursday from 63 percent the previous week.

Cambridge residents are getting vastly more Covid-19 tests than people in other communities, though. They received 26,863 tests for coronavirus in the two weeks ending Thursday, according to the state health department, almost certainly because Harvard University and the Massachusetts Institute of Technology require anyone on campus to be tested at least once a week and other employers may also mandate repeat testing. The city’s generous testing program may also play a part.

The rise of “breakthrough” infections in people fully vaccinated could add to residents’ desire to get repeat tests. The city health department reported that 42 percent of new cases in July were breakthroughs. And two-thirds of total breakthrough cases occurred recently, just in July and early August.

Health officials and scientists have emphasized that breakthrough cases are vanishingly small compared with the total number of people vaccinated, and that vaccines generally prevent serious illness and death. Yet some studies have indicated that vaccine protection fades with time, and federal officials are recommending a booster shot for people eight months after full vaccination. Certain immunocompromised people are eligible now, and the Cambridge Health Alliance said Wednesday in an email to patients that it has begun offering boosters to its own patients in those categories. Beth Israel Lahey Health, the system that includes Mount Auburn Hospital, said it would contact patients about the boosters for immunocompromised patients.

The state health department has begun reporting the number of breakthrough cases in Massachusetts every week. On Thursday it added figures on the number of vaccinated people who are hospitalized, reporting that 129 of 439 Covid patients in the hospital had been fully immunized.