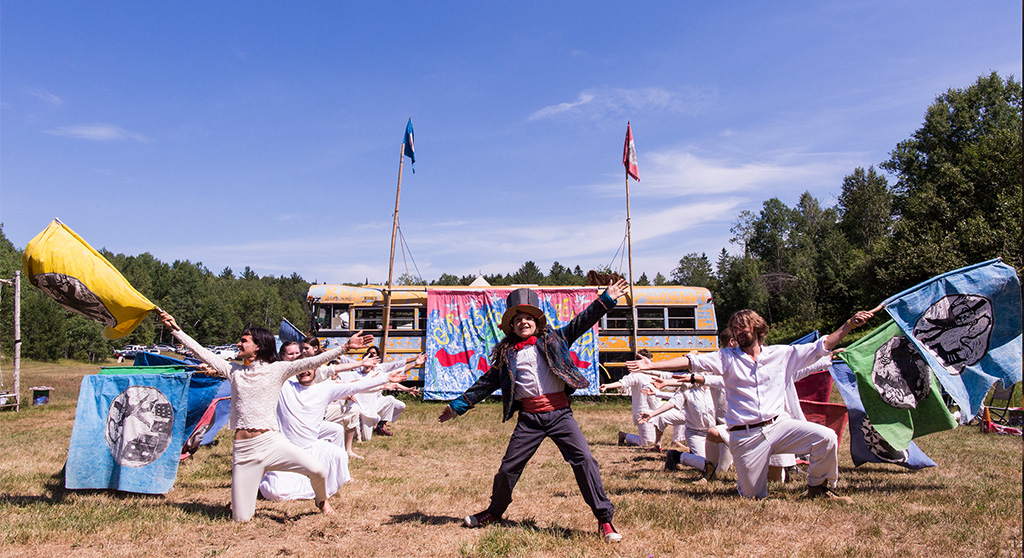 It will feel almost pre-pandemic Saturday as Harvard Square’s Club Passim holds its campfire. music festival and Vermont’s Bread & Puppet Theater makes its annual pilgrimage for a Cambridge performance – though that can make it feel so pre-pandemic that it may seem like the early 1970s again.

The troupe, founded in 1963 by Peter Schumann, began its circuses seven years later at Goddard College in Plainfield, Vermont, and what made it magical remains: Stilt dancers, massive papier-mâché beasts and the Fight-Against-The-End-Of-The-World Brass Band contribute to a colorfully idiosyncratic spectacle of protest and celebration; no one is turned away for lack of funds; and everyone gets some homemade sourdough rye bread with aioli afterward.

The theater’s giant puppets became icons of 1960s anti-Vietnam War protests, Greg Cook noted Aug. 3 on Wonderland in a remembrance two days after the death of Elka Schumann, co-founder of the troupe and partner to Peter Schumann. She noted the elements that merged with the styles of the Living Theatre and other avant-garde companies to give Bread & Puppets such a distinct voice, including a healthy injection of folklore and folk art, medieval art and the works of the Dadaists and German expressionists.

Troupe materials explain: “Traditional circus tropes are reinterpreted with the help of Bread & Puppet’s distinctive folk iconography to draw attention to the urgent issues of the day.”

That is, the songs and drama reflect the immediacy of headlines – kind of.

“For a second year in a row, we celebrate the 50th anniversary of Our Domestic Resurrection Circus,” Schumann said, explaining the thesis in typical Bread & Puppet vernacular: The show is “in response to our totally unresurrected capitalist situation, not only the hundreds of thousands of unnecessarily sacrificed pandemic victims, but our culture’s unwillingness to recognize Mother Earth’s revolt against our civilization. Since we earthlings do not live up to our earthling obligations, we need resurrection circuses to yell against our own stupidity.”

After shows, Bread & Puppet sells its “Cheap Art” – books, posters, postcards, pamphlets and banners from the Bread & Puppet Press – to fund future travel. The Cambridge Arts agency has partnered with it for the Saturday performance.